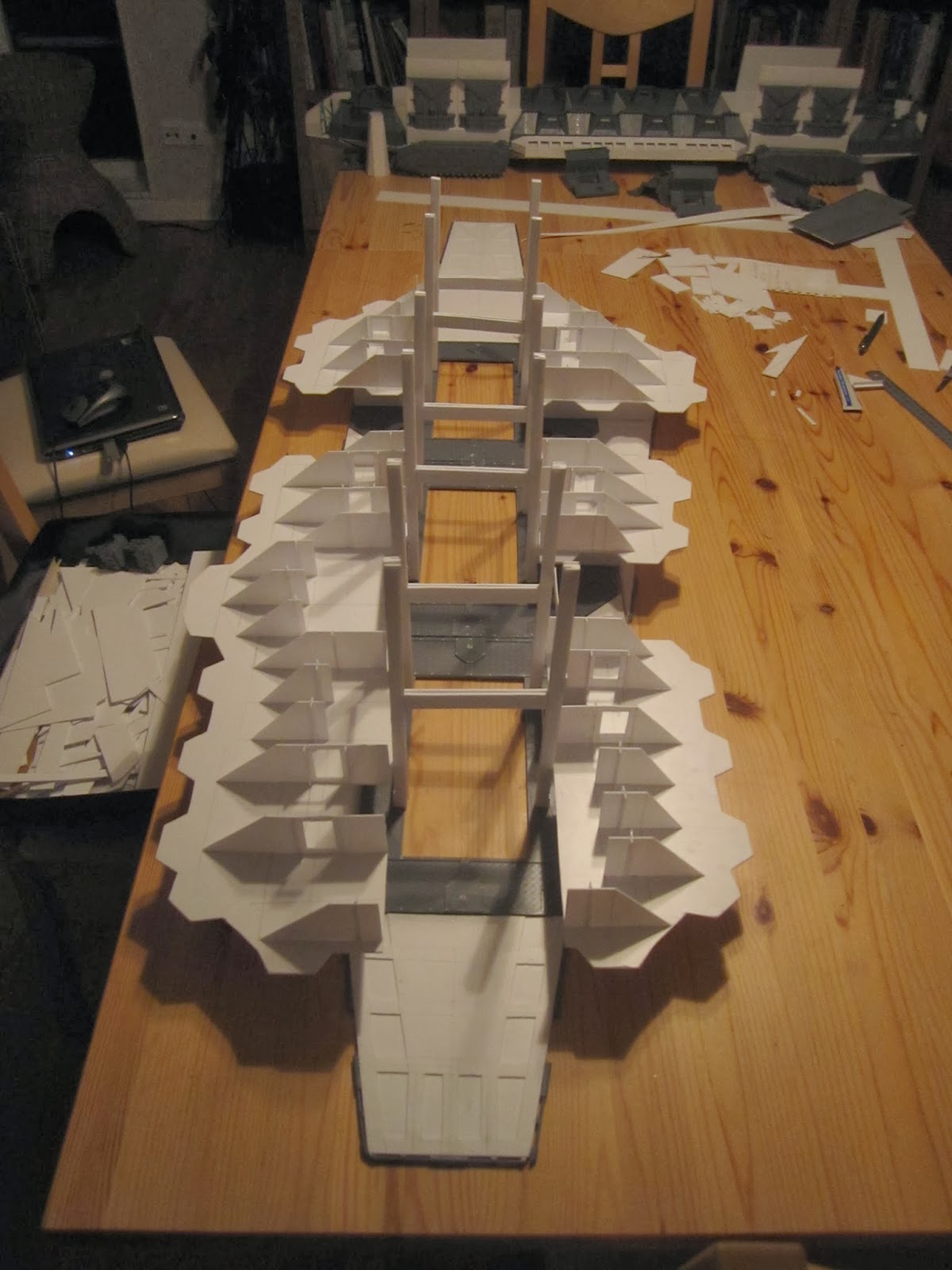 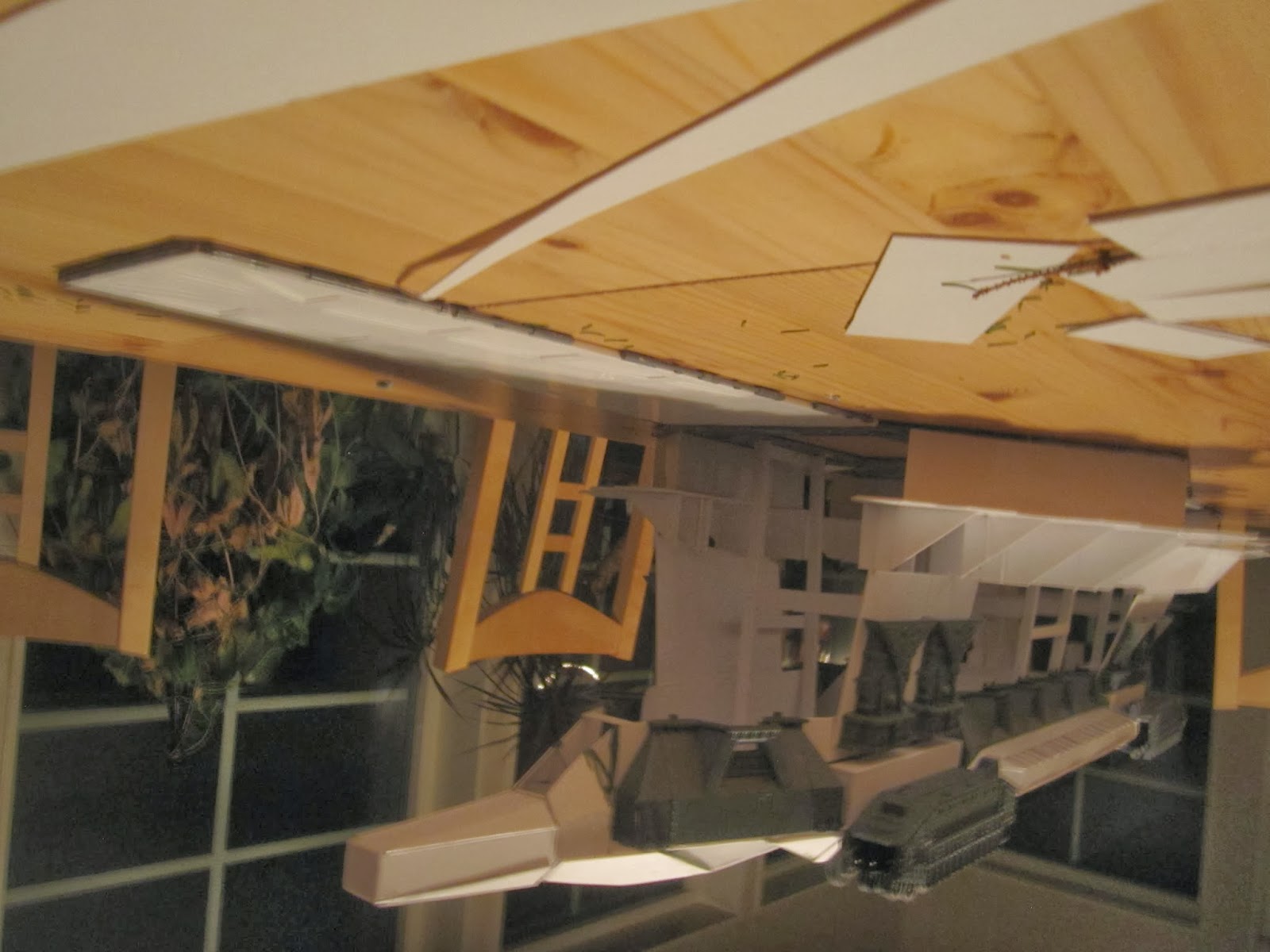 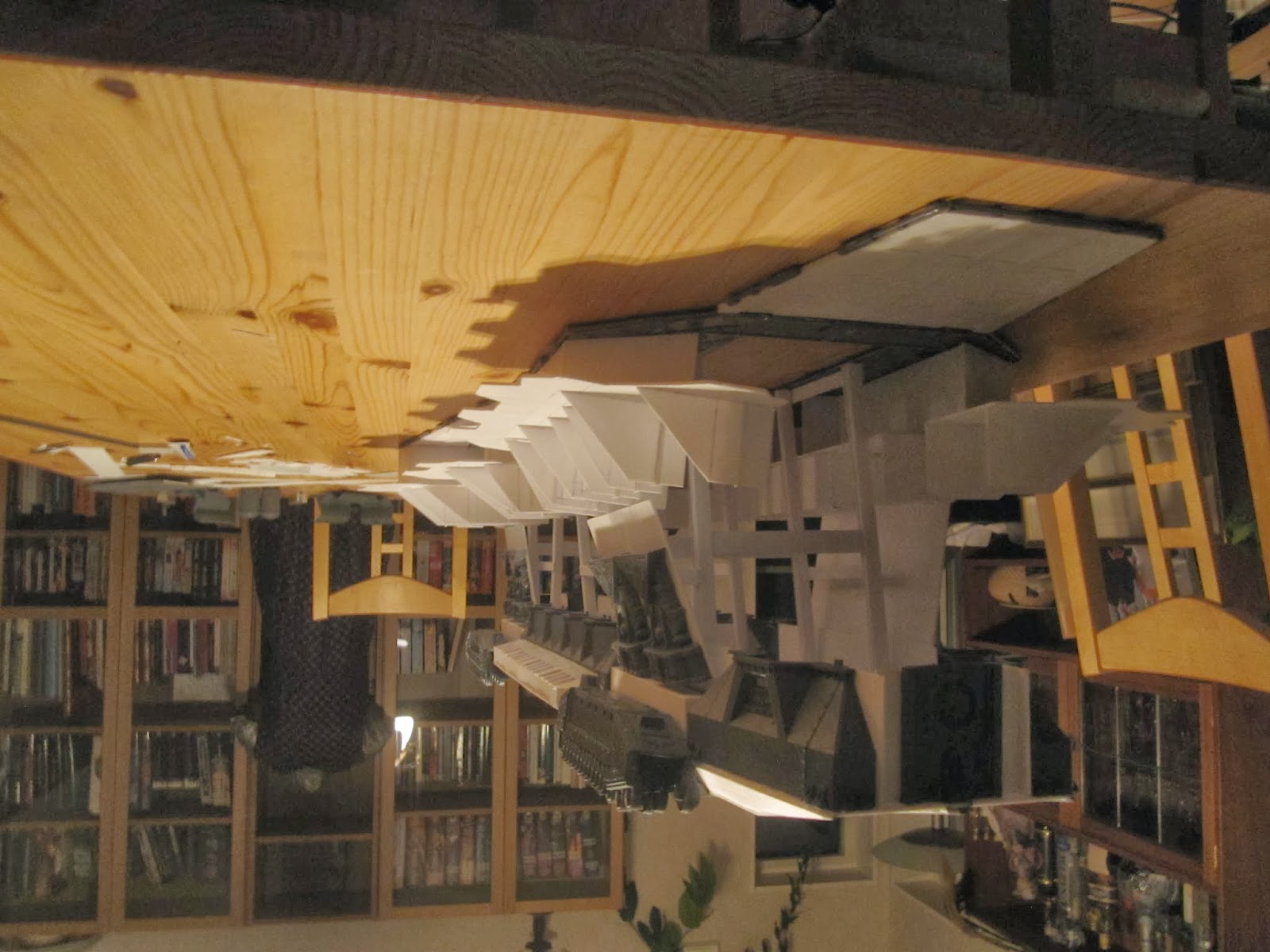 I just want to show the current status of the Opus Magna. I have been building away at the flight deck and its associated side wings. As I have not made any real fastening mechanisms for the side wings yet, so I decided to put the Opus on its back for this photo shoot. Now the proportions start to emerge and what looked like tall an thin now starts to fill out. This will be all for now.

Next I will start building the bow and the aft sections as well as finishing up the sides of the bottom hull. Then I will have to device some way to attach all the blocks to each other but still keeping it modular for paint. 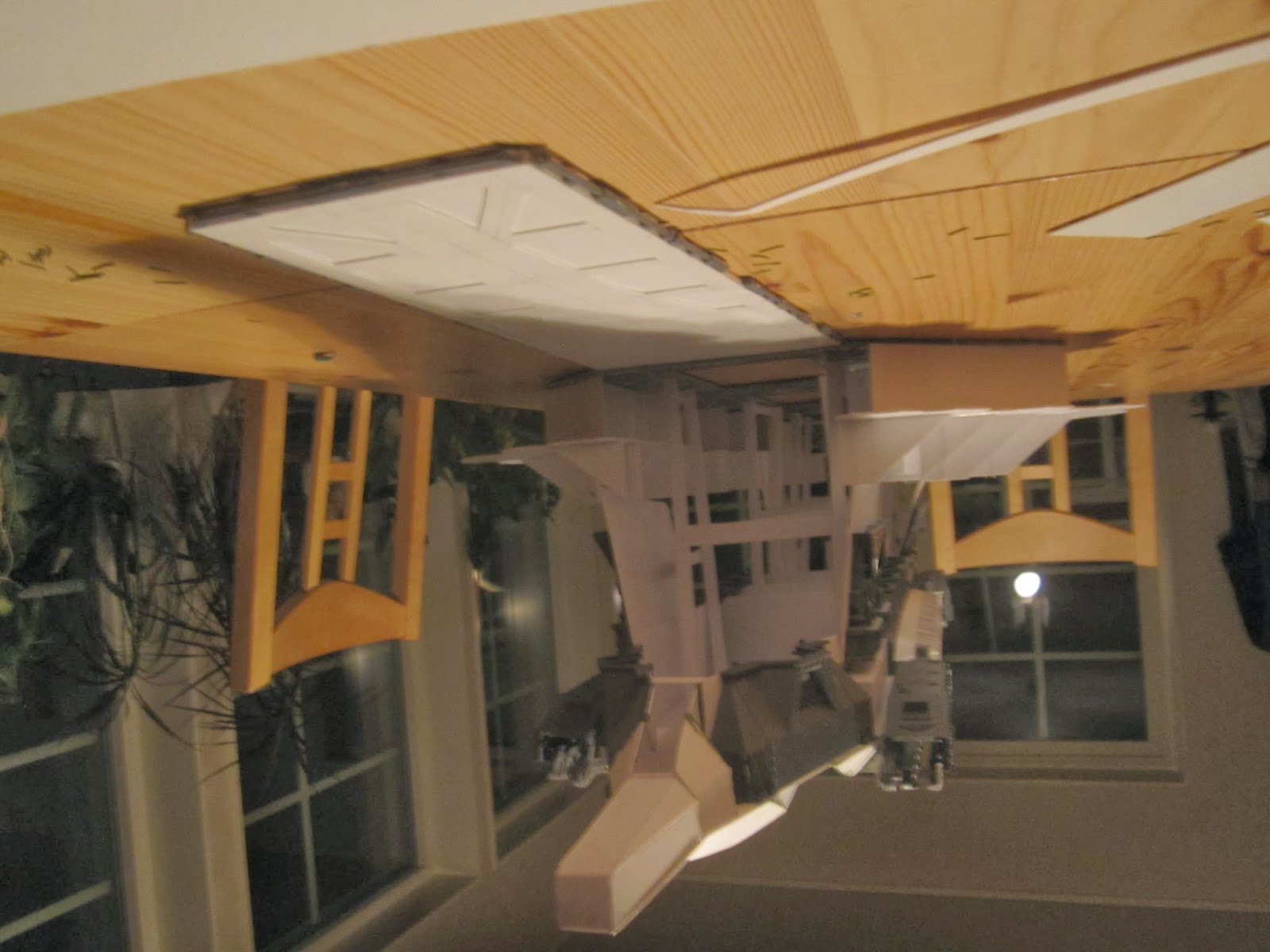 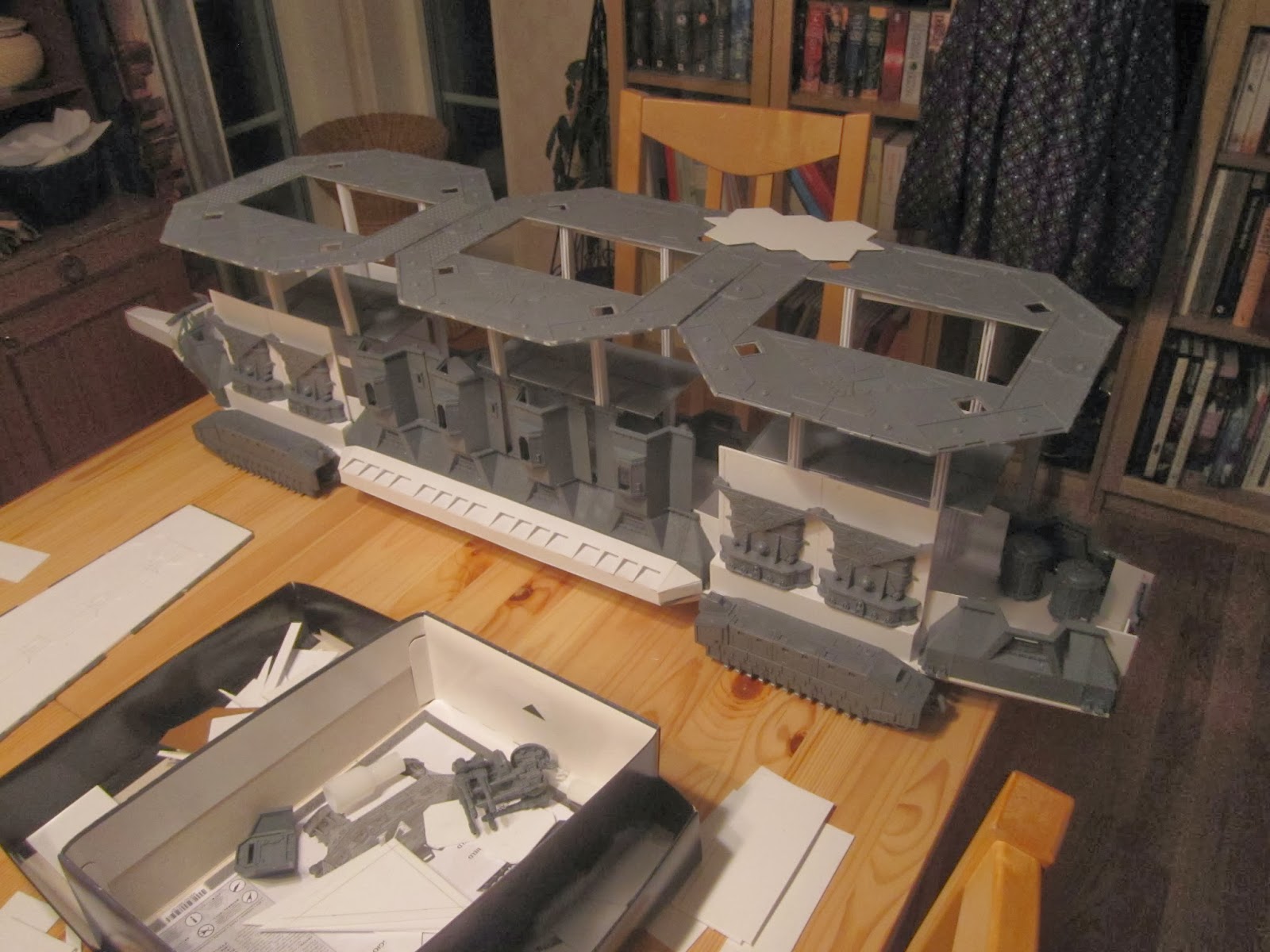 Hi there. Just a short update on the Opus Magna. I have now constructed the elevators that will transport the aircraft from the deck to the hangar bay. They are a little tall and will be shortened to the right hight once the rest of the sides are built. Talking about the sides, I have also started to build the two decks that will go beneath the flight deck. The top of these will have a balcony running around the outside and the edge will be lined with defence barriers making it a nice battlement for any troops to shoot from. The second deck will mostly just be a there to create a graduation from the side of the hull to the balcony beneath the deck.

At this point I am really starting to worry about the size of this build. I might have an understanding wife but not even I know where I will put this thing. It is probably big enough to actually use as a game board.

Well, I will keep building the rest of the decks and try to make some arrangement so that I can get it all together will still being able to disassemble it.
Upplagd av Agis kl. 14:22 1 kommentar:

Update on the Death Guard, Hell Lord and other stuff 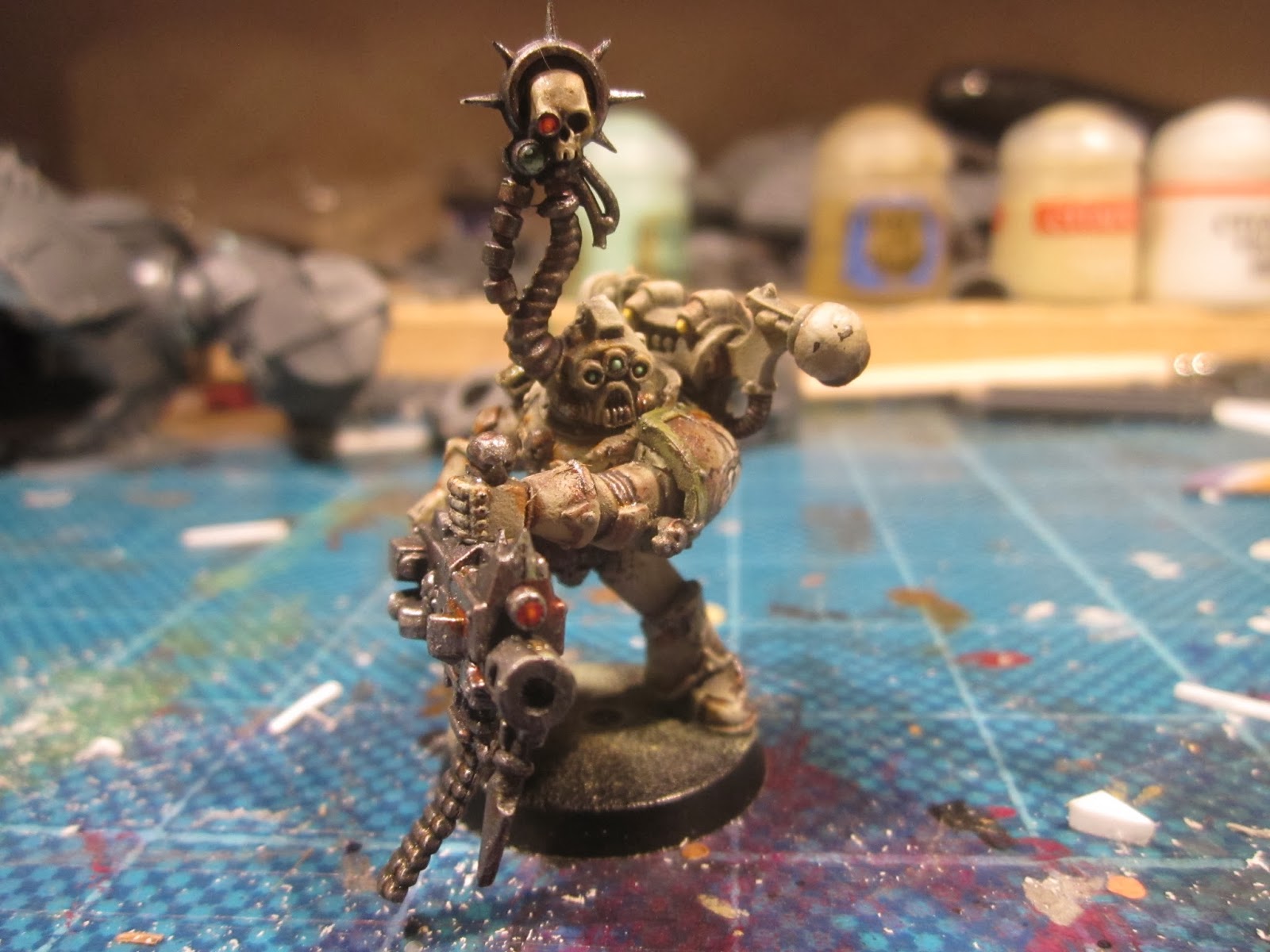 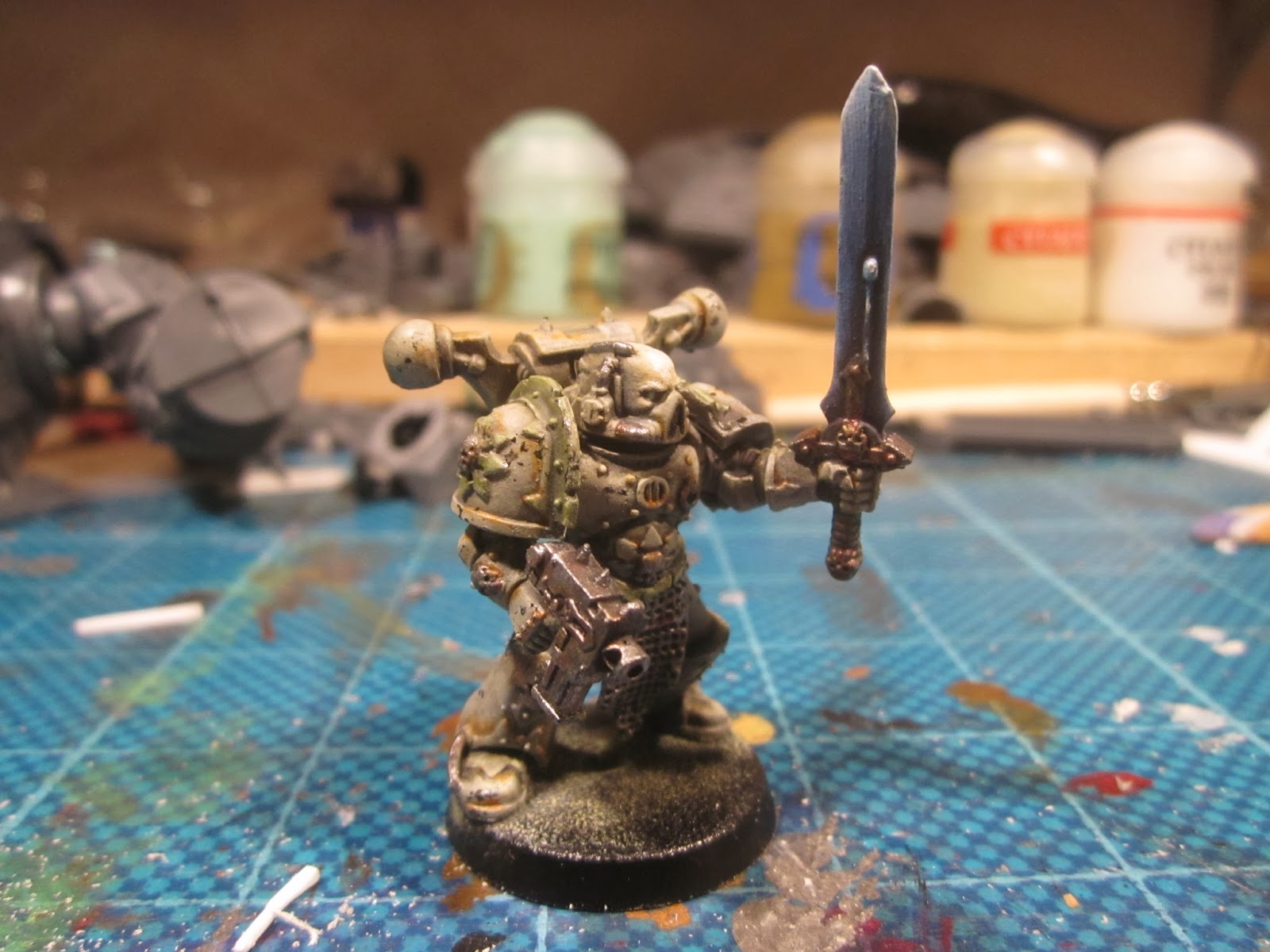 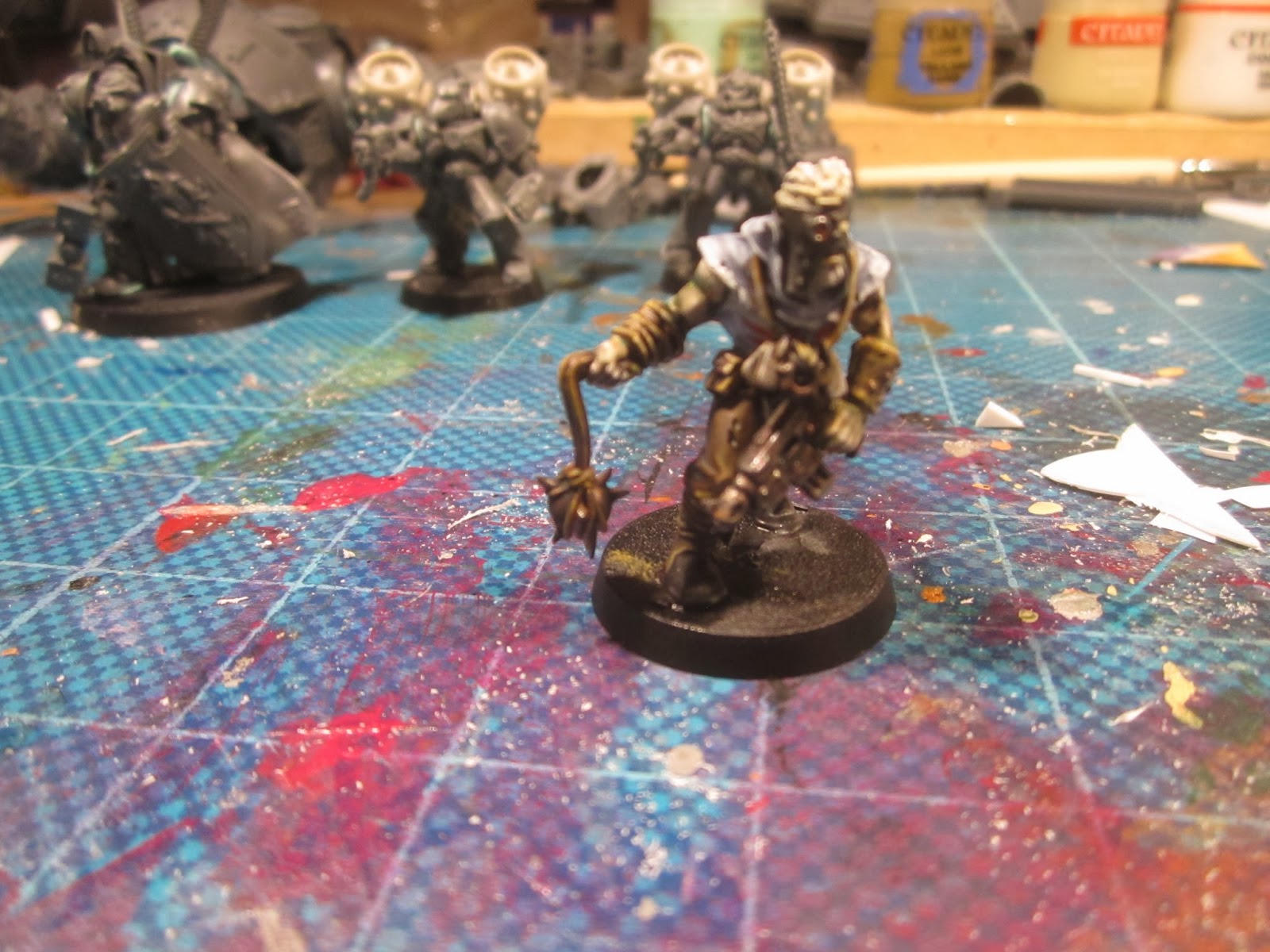 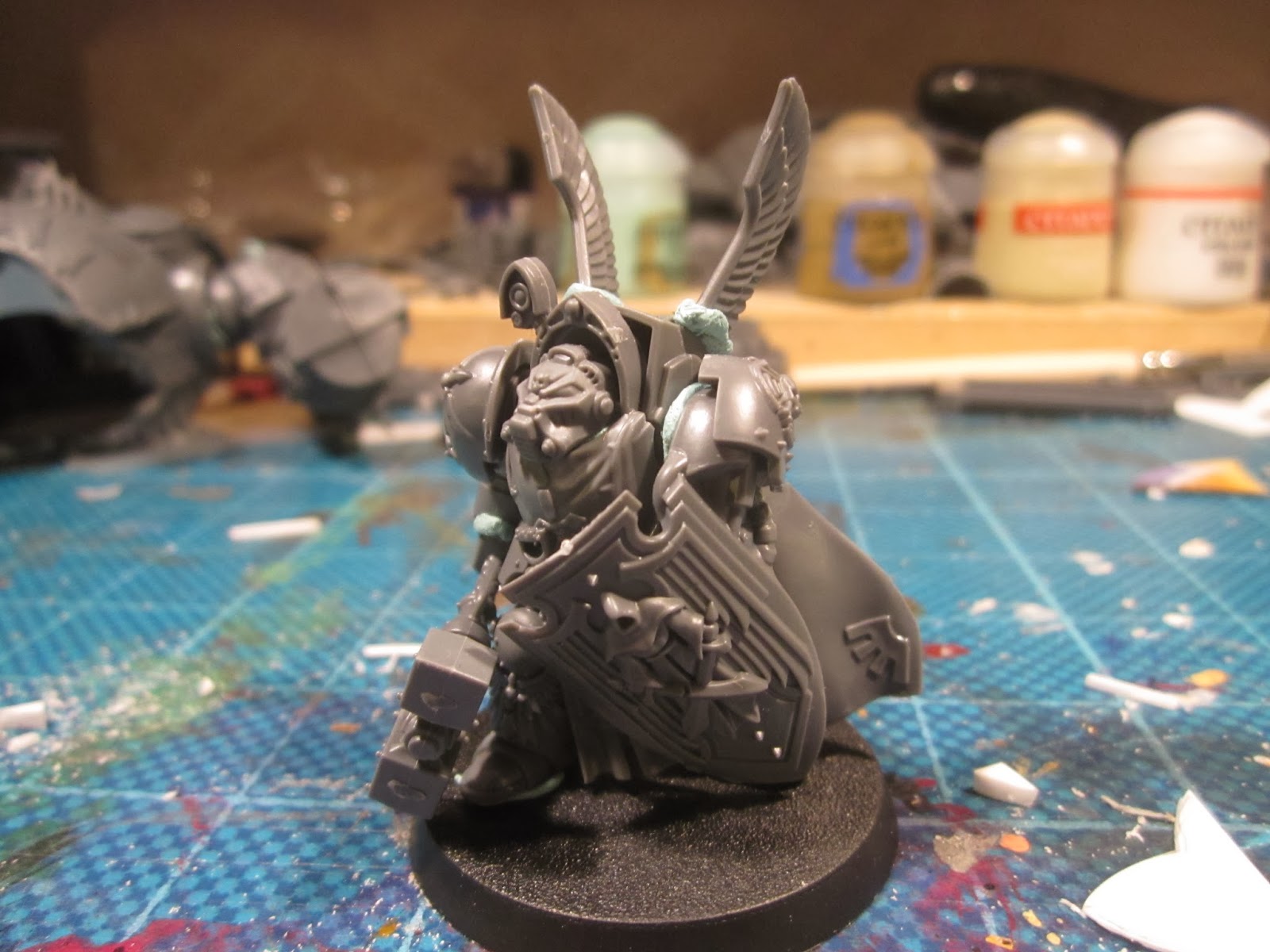 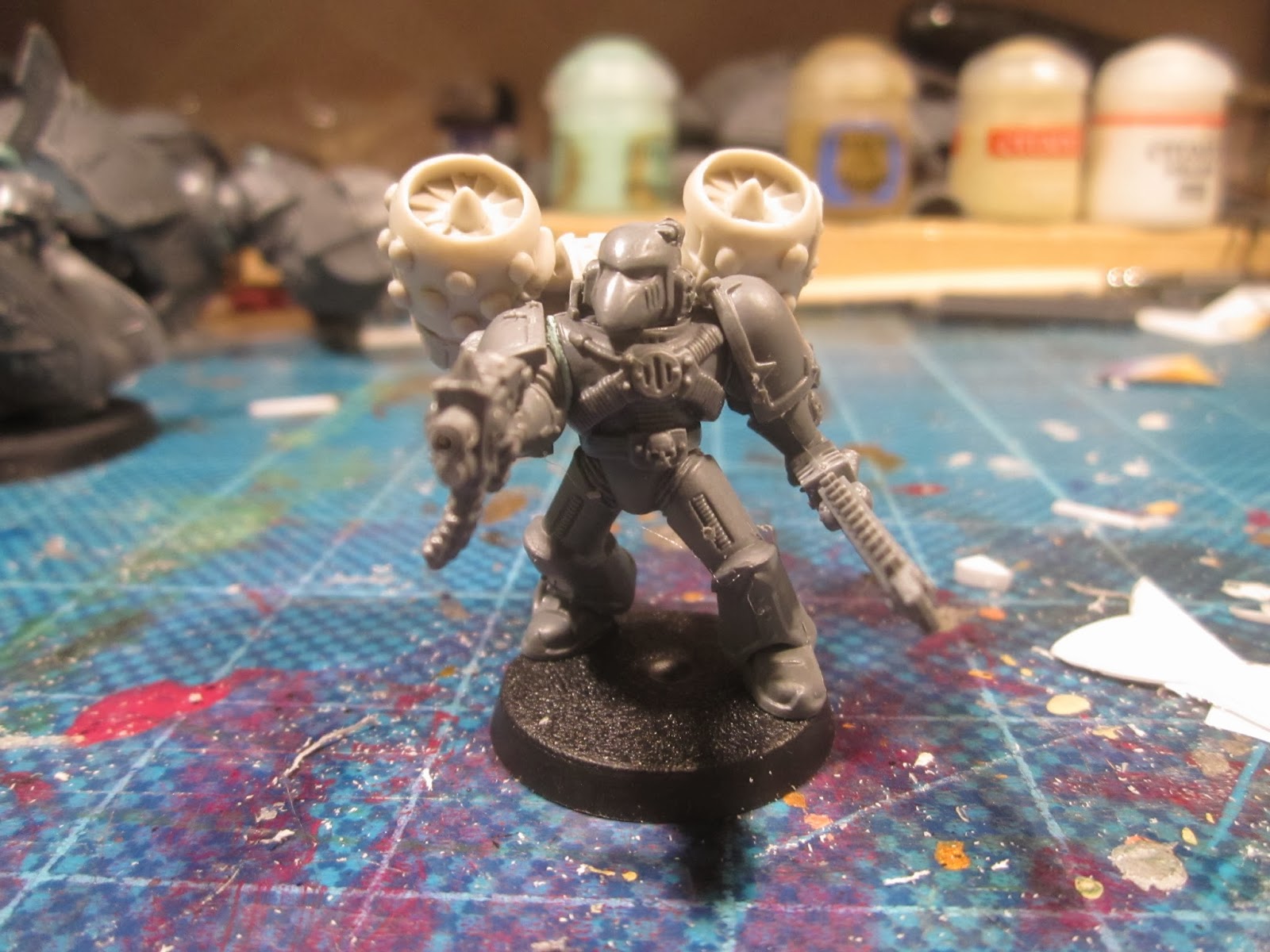 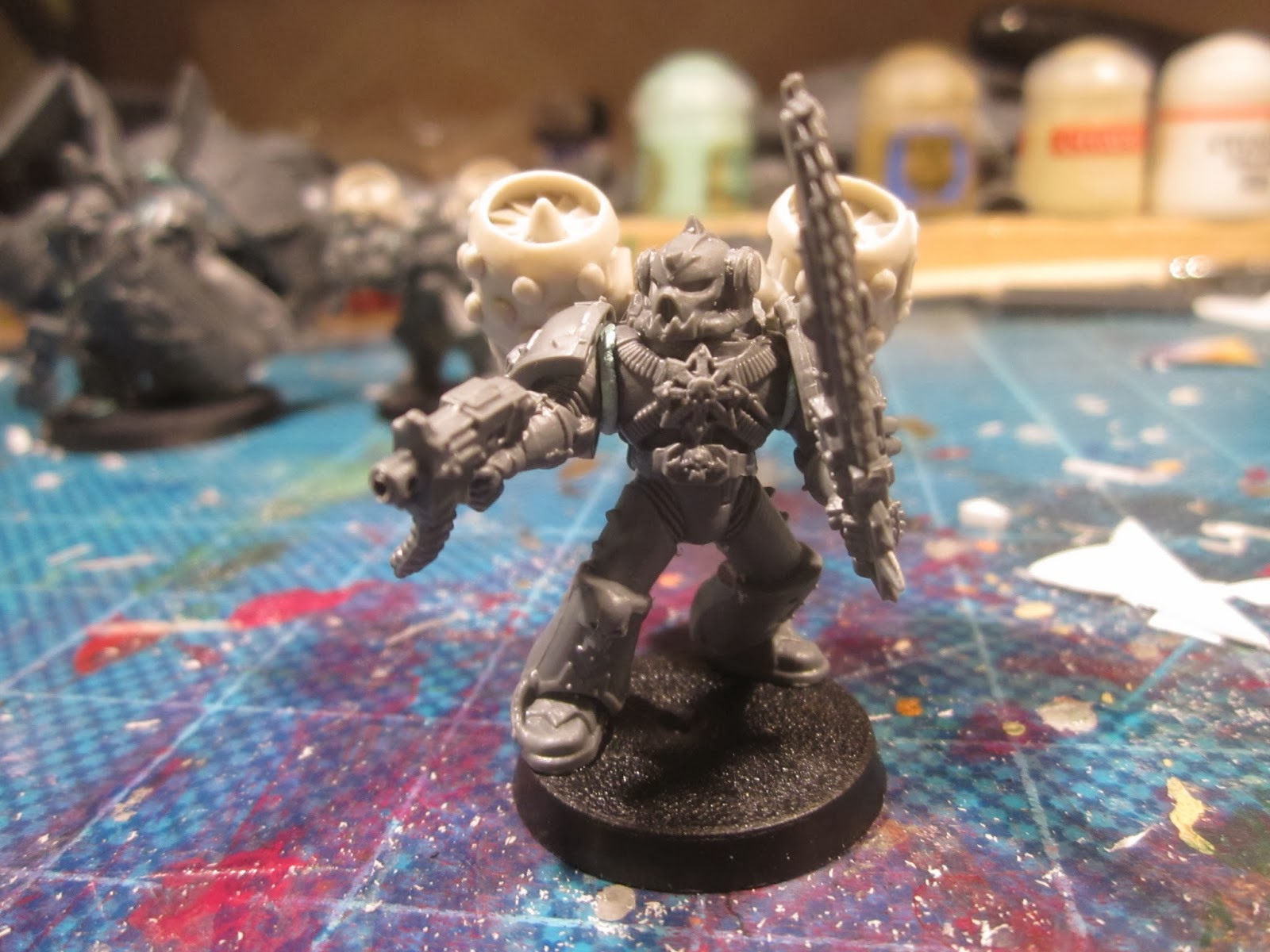 This week as not seen much painting. Most of my time as been spent on building things and trying to get my car to work again. But I did finish of my trio of Death Guard. I also painted a Fallen Dark Angel thrall as well as pepping two assault marines to be painted as fallen angles. I have also been playing around with a Desert Eagle terminator designated as Eagle Guard. But most of the time has been spent on the legs for the Hell Lord. On my last post it was pointed out that the thigh armour looked a bit over dimensioned and it was suggested that I make them smaller. This however is tricky as I am using some plastic parts as decoration and they have their shape which I cant do much about. Instead I thought that I could make the legs more even by adding graves to the lower part of the leg. This has not been finished and they are only mock-up mounted on the legs at the moment. Apart from that I added some pistons to the back of the thighs. I also spent some time to fix the belly canon onto the pelvis, balancing it on three hydraulic pistons. Now I just have to fix the details on the legs and pelvis so that I can mount them properly. The feet also needs to get some attention. Then it is on to the upper body, the axe, the shield and finally the flight pack with wings and the tail...  so much left to do. 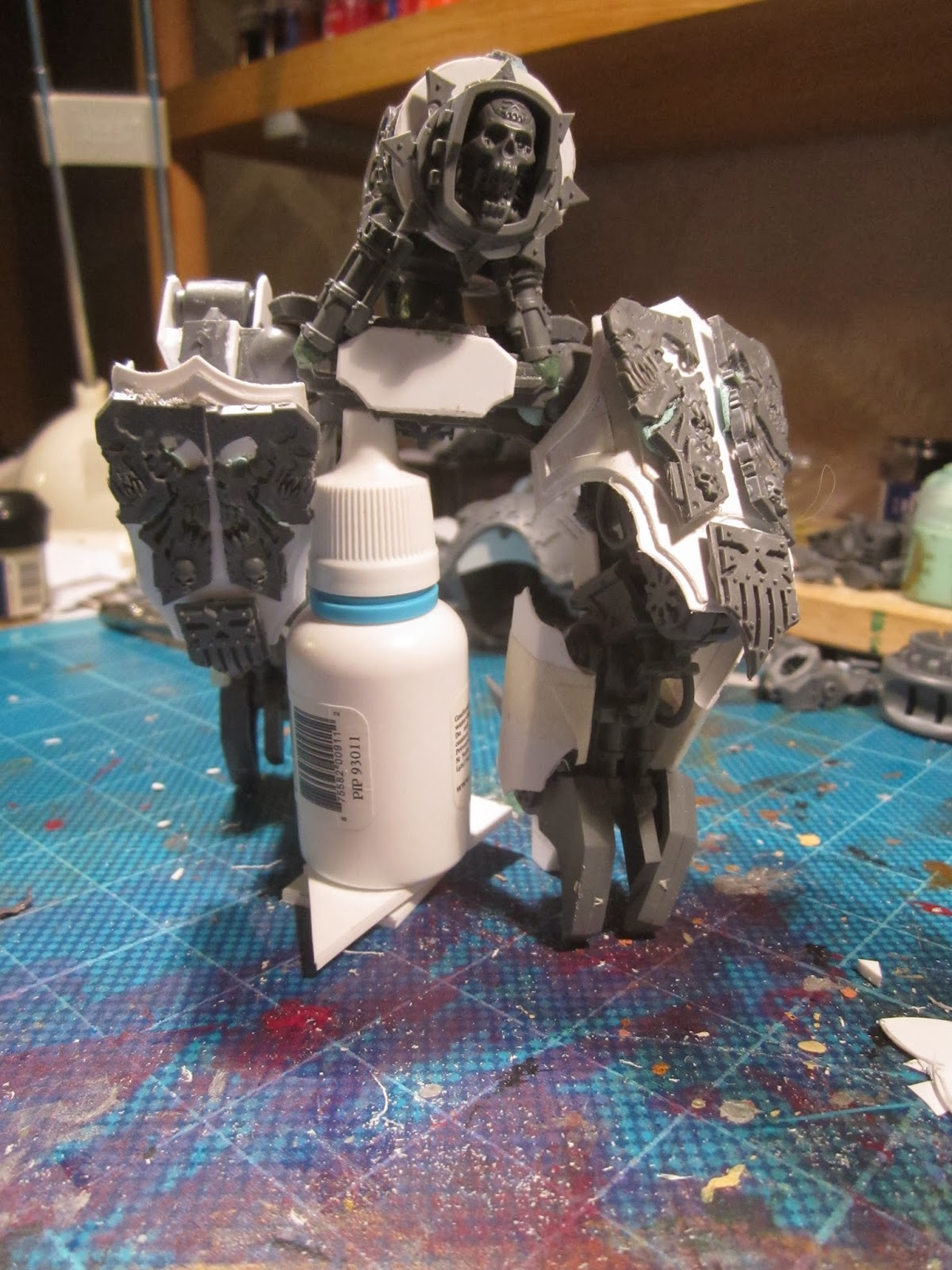 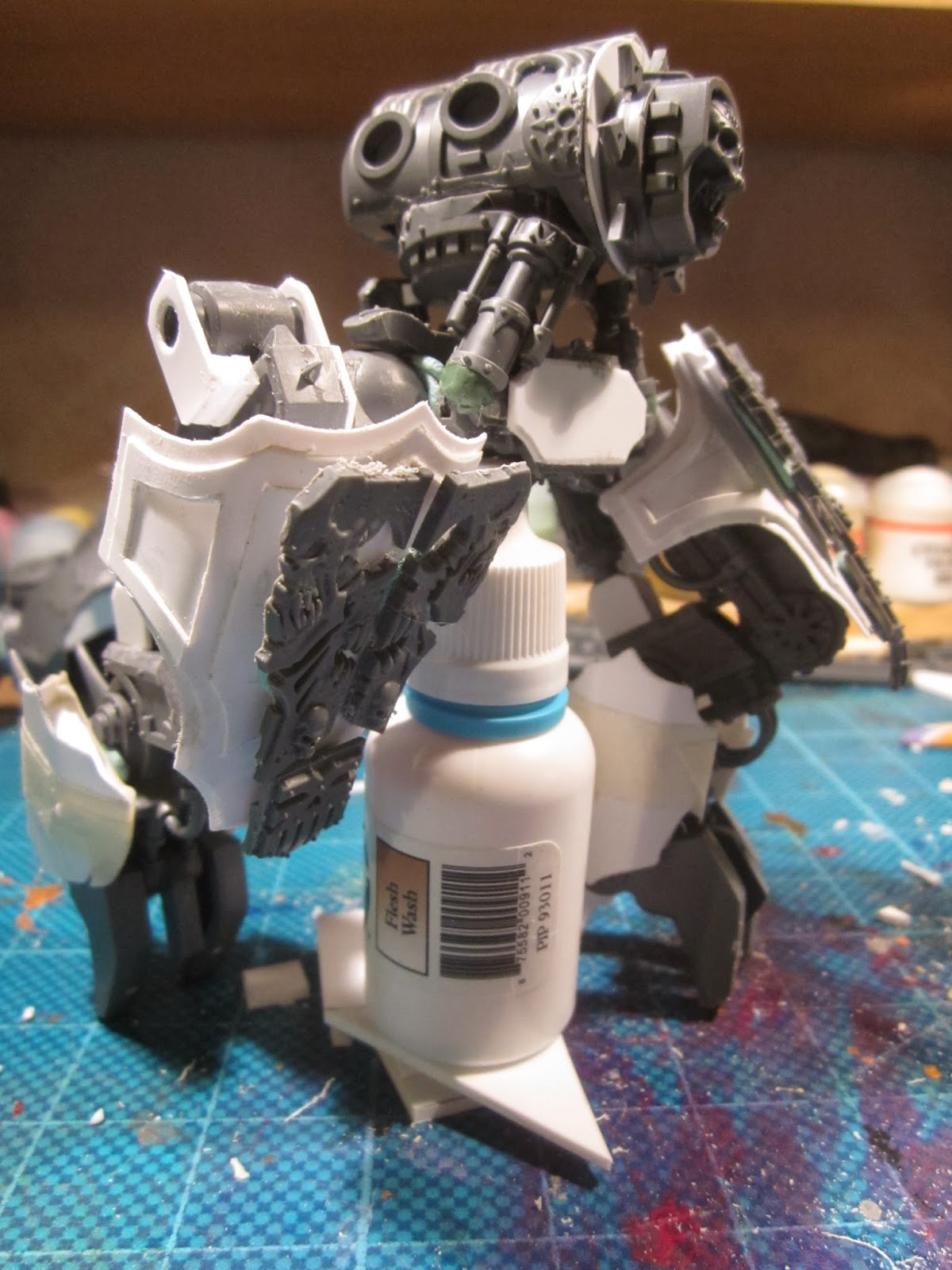 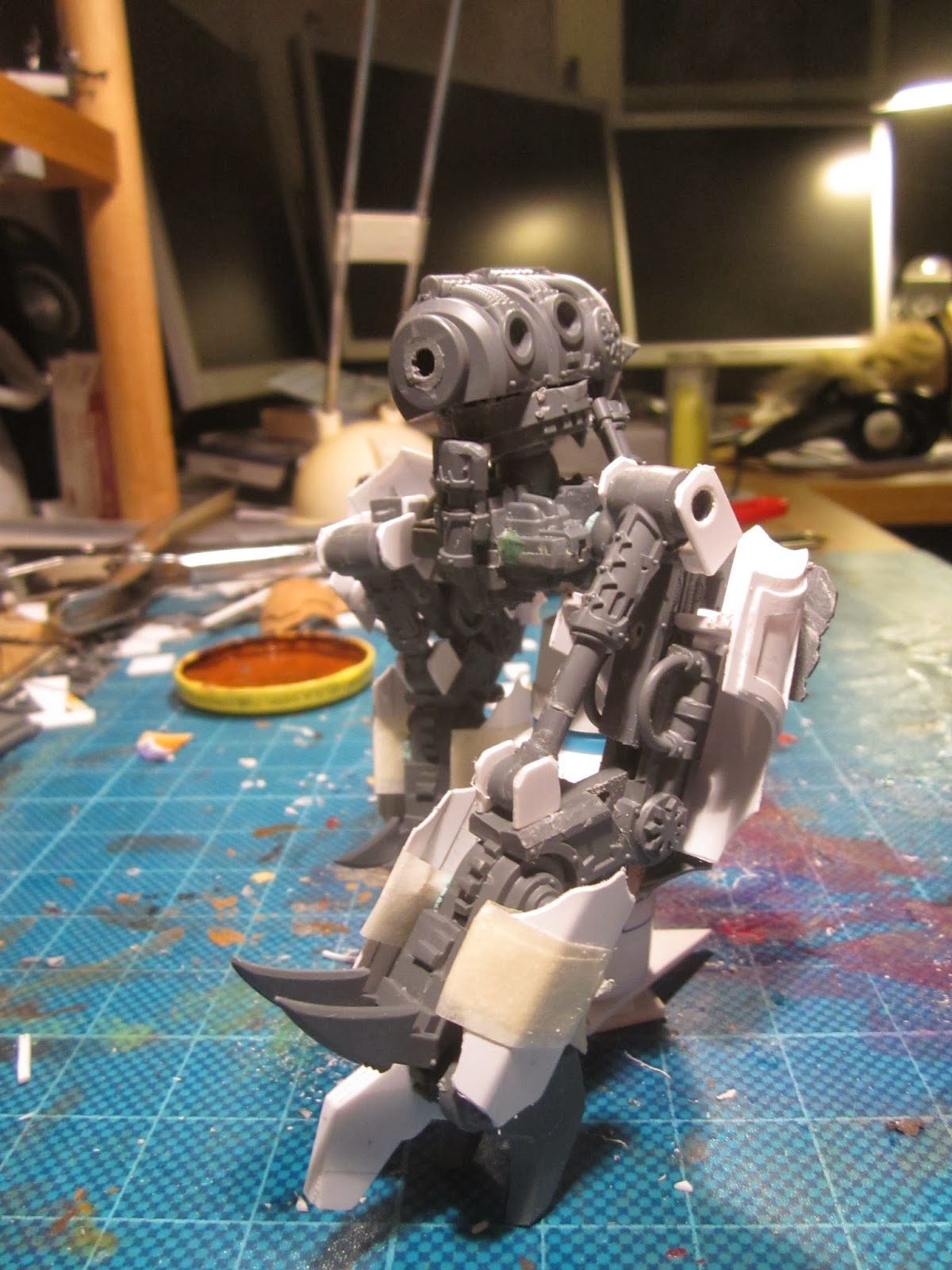 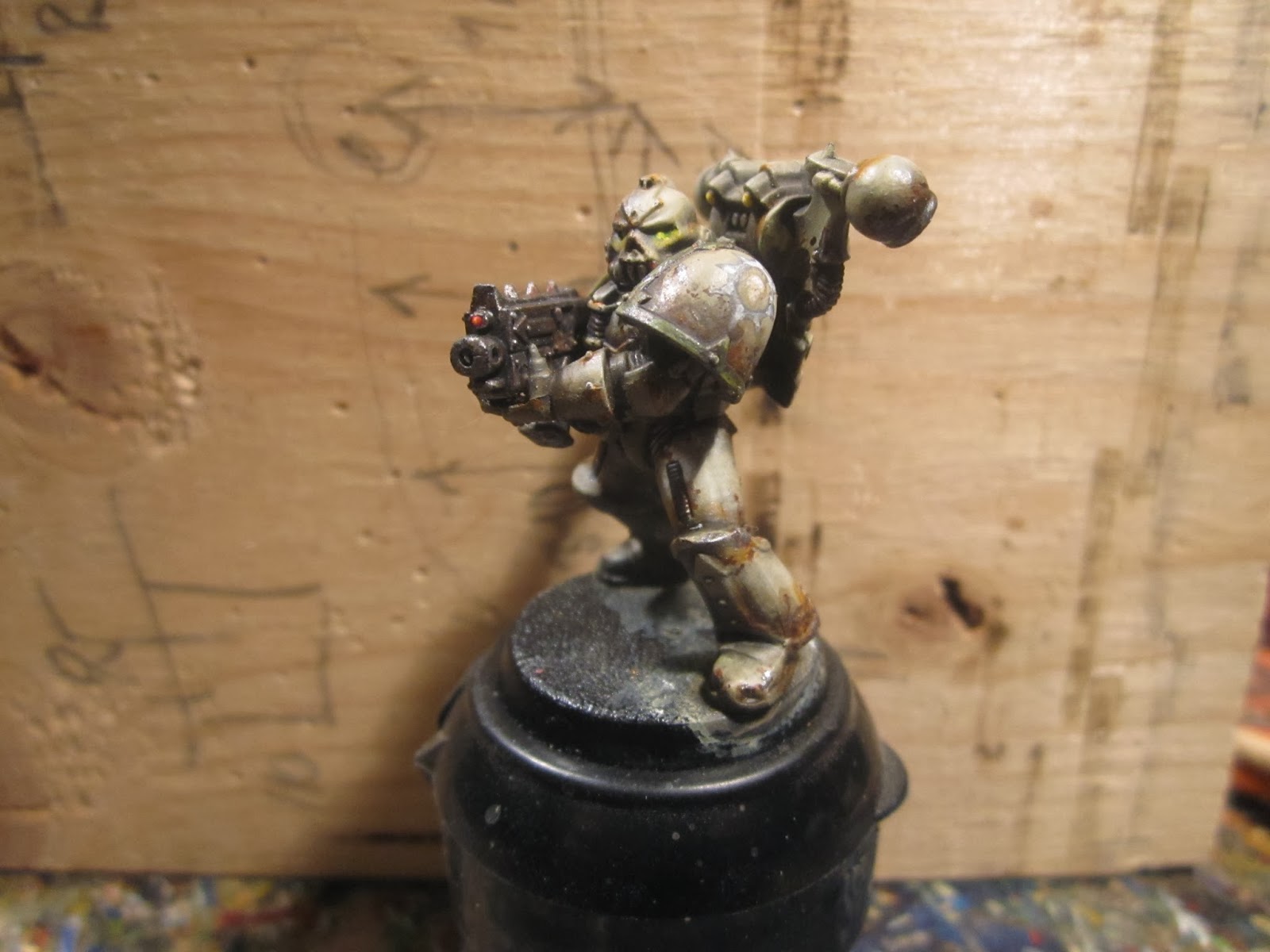 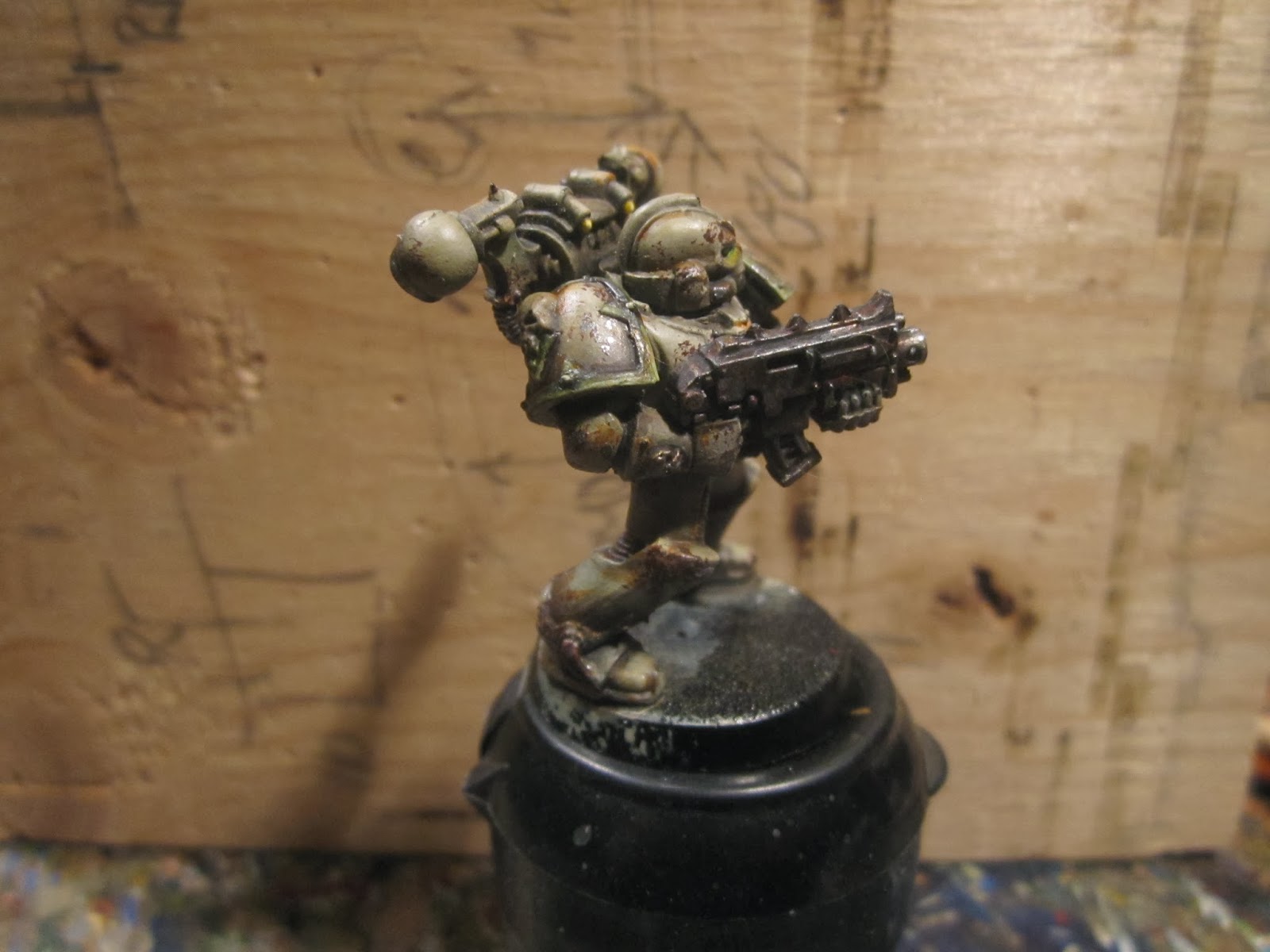 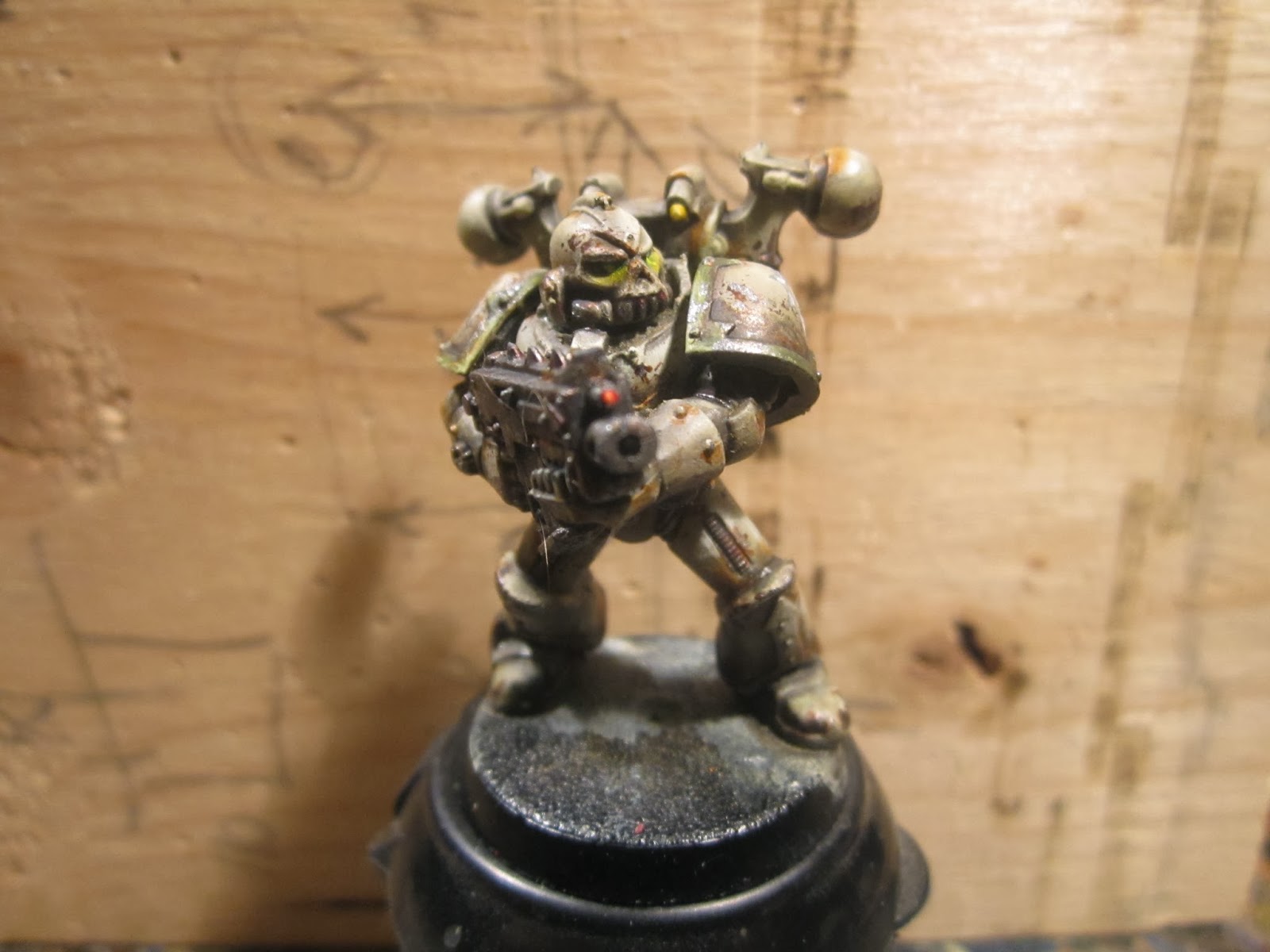 I have long been thinking about painting some pre heresy era models. My fallen Dark Angels might count as a pre heresy paint scheme but painting black is not that exciting (though there will be more of them). I have also thought about buying some FW models and then I need some striking colours to show of the models. I have been a fan of Mortarion since the first times I played epic (might have been the model). However, I am not a follower of father Nurgel, or at least not of his (GWs?) aesthetics for the lord of decay and his followers. I can not see why someone as cool as Mortarion and the Death guard has to swell up, become bloated and spill their entrails. Sure I get the fluff with the destroyer hive and all that, but I can still not get around the plague marine look. But then again, pre heresy they are still cool, and the models made by FW for the Death Guard are also cool so that might be the solution to my problem, paint a cool army in pre heresy. Well, I will fist try to find the colours. Most people paint the Death Guard in white with bright green shoulder trim. In the fluff they are described as anything from grey to marble (colour unknown) to white...  so I take it that they should be in the grey to white shade. I have some chaos marines laying around for test painting so I build my self some stand in death guard. What I have learned from my Desert Eagles is that a monochromatic palette actually works quite well on models. You can achieve different "colour" just by starting or ending at different points in your colour line up. As the model would have green trim on the shoulders I decided to give the white a slight green tinge to pick up the borders of the model and make them blend in better. Then of course the model would have rusted metal and a lot of grime and wear. All in all the painting when rather well. I am not sure I actually got the look I was aiming for. The white is more ash grey then bone white but it goes well with green. I also reversed the colours of the Death Guard enblem, so that the Iron Halo is a bright grey instead of the black mostly seen (it is described as iron grey in the fluff, at least as far as I remember).
I tried to get some photos but it is impossible to get a true representation of the colour with the light I have available (dark out side and bright spotlights on a light coloured model). I will try to get better pics with natural light when I can. I might try to change the recipe for the next model just to see if it can be improved. Maybe go more towards the more classic FW look with a more pronounced white.
Upplagd av Agis kl. 10:20 1 kommentar: 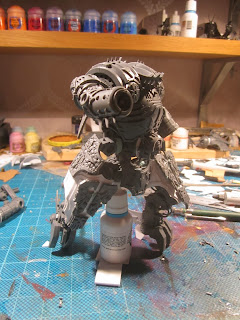 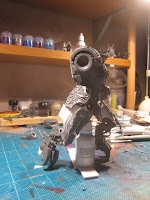 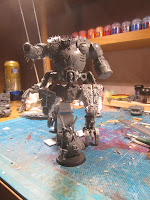 What do you get if you cross a Lord of skulls with a Hell drake? You get a, Hell Lord....  or you will eventually. Just now I am playing around with a build that has been swimming around in the back of my head since my first Lord of skulls build. I want it walking and I want to give it wings. Just now I am just assessing possible ways of assembling some of the parts and building some new ones to fill in for parts that I can not get from the kits. At the moment I am mostly concerned with the the legs to torso proportions. I do not want the legs to be to long with a squat upper body nor do I want to give it to short legs making it look like dwarf. The proportions must stay mostly human. I am using the same leg build that I did for the CC-knight which is based on the front claws of a defiler. I have build new leg amour to cover the thighs and for decorations I split some head crests for the Lord of skulls. The pelvic region is currently very thin as I could not use the original parts from the Lord of skulls as they made the upper body to tall. Instead I have just a small ball en socket type of joint but it will be sured up by the pistons from the Lord of skulls.

I am also working on a flight pack that will attach to the back. This will also hold the wings from the hell drake in an upward position making the model almost twice as tall and a tail.

It will be armed with a great twin headed chain axe and a tall shield and some random guns. 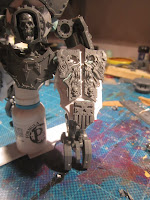 Well that is about as far as I am right now. I will keep playing around with parts and blue tack until I get the build as I want it then I wills start cleaning up the parts and start on the green stuff work. In between I am sure there will be some other models that get painted.
Upplagd av Agis kl. 16:26 1 kommentar: 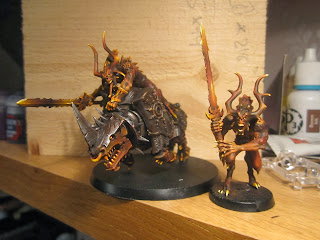 Epic fail. Just because you think you know how to do something, you should not take it for granted. This time I failed with the drybrushing, which is sort of my technique. I thought that I would paint up a bloodcrucher with the same paint scheme I used on the blood letter the other day. So I assembled the model, got it sprayed and set to work. But I forgot that you can not drybruch for to long with one colour run. This is especially true if your drybrush is on the shorter side. So either you use less colours or paint smaller areas. The black to yellow paint scheme used on the bloodletter uses 9 colours that needs to be applied in one go.  So at the end the brush was so full of colour that it was more of a felt pen rather than e brush. This off course meant that instead of applying paint I was rubbing it away. So I really should have divided the model on the rider and the steed to keep a nice even application of paint through out all shades. Well, once started it is only to finish what you have begun, so I did finish the paint job. I am not to happy with the quality but the over all scheme is ok. I did think that I should cover the metal in flaked black paint as I have done on the forge fiend and hell drake, but I really liked the bare metal contrasting to the very bright daemon flesh. Well now that I know how to paint these I just have to paint up the rest. 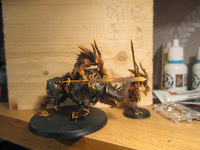 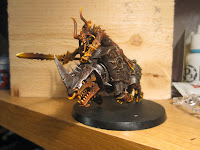 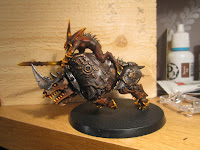