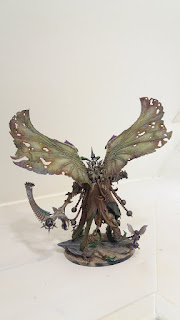 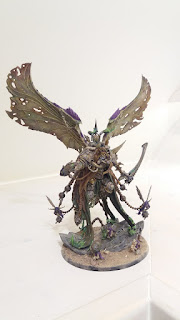 Finally finished Mortarion. This model was interesting to paint. There are so many details and a lot of them are hidden behind other parts so you have to paint it un-assembled to get to all of them, or at lest I had to do so. I think the color scheme also worked out. I tried to keep him a bit more muted than the GW paint job. This helps with the realism. I think that since the models (nurgle, death guard) are sculpted with all these tentacles, etc a bright paint job only enhances the cartoonishness of the models. I still maintain that the sculptors should leave the, smoke, flames etc as optional for the models. It is hard with a realistic style of painting when there are fake effects on the model. All the little demons were a pain to paint, very small, and lots of detail and skin tones to paint. And handling the model during assembly and afterwards is tricky to say the least. I have no idea how people are going to transport and play with this with out breaking thing off.
This is not a problem for me as this will go into the display cabinet and probably stay 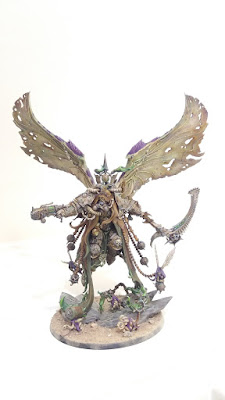 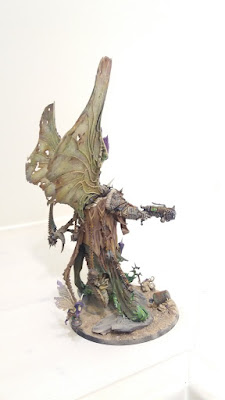 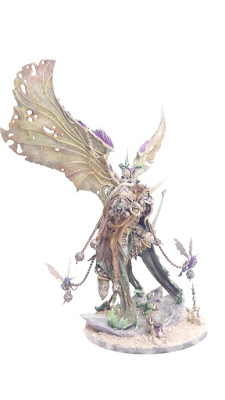 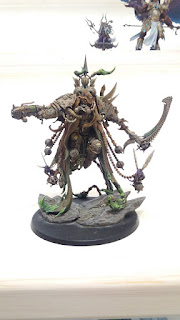 This week I managed to get quite a few hours of painting. This meant that I could finish Mortys head and weapons as well as get the small flying demons attached to the main model. I have also started on the wings. These are just at the first pass with drybrushing at this stage so I need to add some more washes/inks and then drybrush again. When doing these big flat areas it is important to take it slow to avoid icing. So far so good. I am looking forward to finishing this model. It has been fun to paint but it is taking a long time and there are perhaps a bit to many details. It is hard to keep the focus up. But I am on the final stages now. 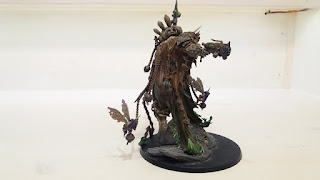 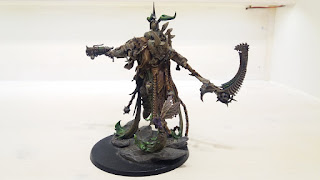 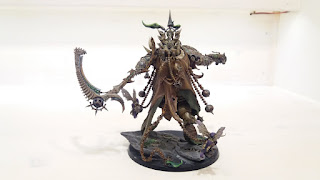 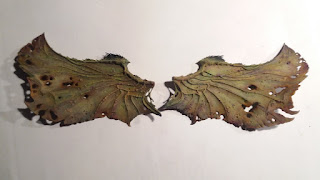 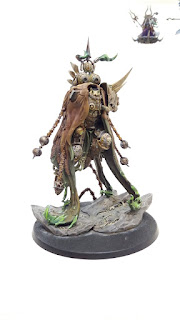 This week has not be great hobby wise, I only managed to sneak in a few hours on Mortarion. But I managed to finish the main parts of the body so that I could assemble the model and attach it to the base. I think he is coming along nicely. My wife is not a fan of the brown upper coat but changing that now will be very hard. I might try to add some more contrast to it with more highlights and deeper shadows. We will see what happens. Next up is the head and the two flying demons. 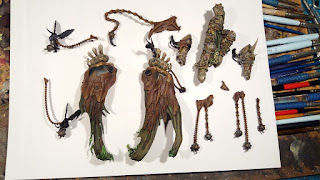 This has to be the worst/best model GW has made so far.

Of course I had to pick up the primarch of the death guard as soon as he was released. Not that I am planing a death guard army or so, but with the models in the Dark Imperium box and all I thought it would be nice to paint Mortarion to go with Magnus. But this model is ridiculous in all the detail and flying stuff. In principle you can't build the model before painting unless you have some extra dimensional skills to get into all the recesses and hidden parts.I am struggling with all the detail on this model so I can't imagine what it would be for some one who just want him for games but is not a great painter. The model is expensive enough to make you want to have a decent paint job on him.

Well, to make to most of it I decided to paint him in sub-assemblies and then carefully glue him together. Once I figured out how much I could actually build before painting I needed to decided on a pint scheme. The original colors portrayed on the box looks a bit to cartoonish for me so I wanted to go with something darker. So I decided to go for a bone white armor, similar to what I made for the death guard I painted recently, and then keep the rest of the colors in green and browns. Once I had colored the white of the armor and added rust, slime etc it was no longer bone color but closer to greenish. Well, it looks ok so I will go with it. Next up were the robes. Here I when with a green under coat and leather overcoat with rusted mail in-between. The flames at the bottom of the robes turned green ( I know I have said it before but I will say it again; I wish GW sculptors would stop adding smoke/flames to the models). I was a bit unsure about what to do with all the chains hanging from pieces of cloth from the robes. Either I would attach them from the beginning and cover the joints with green stuff. This would however make it very hard to paint the robes beneath. On the other hand if I left them off I always risk having a color miss match when attaching them and the joints will be visible. Once again I would wish that the sculptors would thing a bit more on the finished model rather how cool it can look in the CAD before cutting it up for casting.Well be that as it may, I will try my best with the models I am given. Once the cloth was painted I started out doing the rusted metals.For the death guard I have decided to do another version of the rusted metals than what I normally do. In this case I wanted it to be a more solid, dry rust layer with just hint of bare metal showing rather than the other way around. I thin k it turned out quite well. All in all I think I managed to keep the palette quite homogeneous. I will add some more point colors in all the small daemons flying around and on the wings. 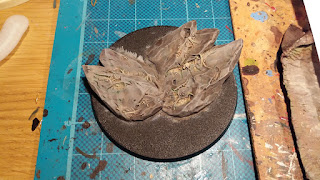 The base is also an interesting piece. I do not know if is meant to be stones, or some semi organic thing that is filled with bones etc and bursting apart. I choose to portray it as stone...  with some touches of "chaosification". I tried to add some marble veins to the stone but I did not get it to work properly. I thing I would have needed to paint some contrast between the two sides of the veins to make them look more realistic. As it is they are barely visible so I will leave it bee.

Next step is to finish up the details and assemble the body on the base. Then I will get a better picutre of what Mortarion will look like and if I need to change anything (if it is not already to late at that stage).