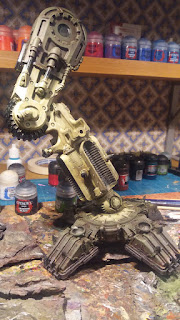 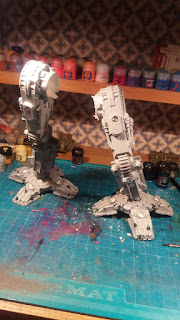 Finally I have started to paint on the actual FW model. I started out with the feet and legs as these were the only parts I have assembled far enough for painting, and the most critical part to paint before continuing with the build. As this model is crazy detailed and highly 3D some of the parts need to be painted before some others are assembled if one which to make it a bit more easy for the panting. To stop paint going were the glue for the other parts need to go I used masking tejp to cover the insides of all sockets and also a little patch were the toe pistons attach. I hope this is not a bad move since a lot of the techniques I use are really hard to touch up if something gets damaged in the rest of the assembly process.
Well, onto the techniques used here. I wanted the feet to look really worn, rusted metal and flaking paint at the bottom and more grease and rust further up. After a base spray of black i painted the bottom of the foot black and added some brown, red brown and orange paint in some random patched to give some depth. After this I dry-brushed on several layers of different color metals, also with some random coverage. This was followed by some inks and washes before a last dry-brush. Once this stage was done I used masking tejp to make some random patterns along the bottom of the foot and toes. The edges were then covered with the base paint I am using for the titan to give a lighter layer between the metal and the paint. After this I used my standard Northern Ghost green recipe on the bottom of the foot and toes. After drying I removed the tejp to reveal the metal beneath. Sadly some of the paint came of with the tejp so I had to do some minor touch ups. Over all I am pleased with the effect even if it could be more visible, the metal and the dark green paint blend together some what. We will see what happens one I get to the weathering stage. 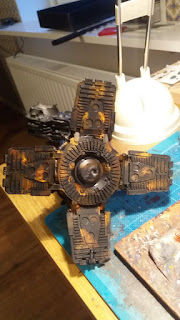 Well, once the foot was sorted I started with the rest of the leg. I had decided to use some more colors on this titan than I used on the others to achieve some more contrast. On my resent knights I tried to paint the backside of the armor plates in a lighter green color, representing the base paint used to protect the metal against rust etc. The effect was kind of what I wanted and I liked the color, kind of the same as used on aircraft, but it was not visible enough. Since the lower legs are mostly covered with armor plats I decided to paint not only the backside of the plates but also the whole lower leg in just the base paint so that it is visible through the gaps between the armor. With the pose of the leg I am sure this will show up.

When prepping the model I noticed that the thigh is actually not just a solid piece but is actually consisting of two parts (cast as one), and there seams to be a dampening system in place. Initially I had only planed to paint the parts below the knee in the base paint but now I decided to go all the way up mid thigh to the joint. There is a risk that it will look like the titan is wearing shorts but I think that with the armor plating in place and some weathering it will look alright.
So far I have painted one leg up to pre-weather and just started on the other. I will paint both before starting with weathering and chipping to keep it coherent. This will take some time as the legs are huge and my painting style is very slow. I have to break each leg into several areas (5) that are painted separately. Each area then sees nine layers of paint just to get it to this stage, so I am expecting the painting of this beast to take up to a year or so depending on how focused I can stay.
Once the legs are done I will fix the pelvis and the pistons there and once that is assembled I will attach everything to the base before gluing in the rest of the things. I hope that it will work out ok. 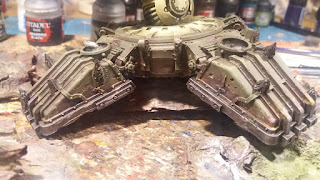 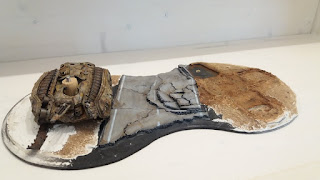 This must be a fist for me, finishing, or at least starting a base before the actual model. Well, to be true I have started painting the insides of Varangian but that is also not FW parts, I still need to get some paint on resin. This is about as far as I am going to get with the base until the feet are attached and I can do the final parts. I think the foot print worked out fine, some of the detail of the underside of the foot can be seen and I hope that it will be visible also with the foot in place. Normally I do my bases using natural sand and do not paint them. In this case there were a lot of the plaster showing through the sand in the foot print. So I had to try and paint it in color that match and also give the prints some more contrast. The chimera is supposed to be an abandoned wreck, left by the rode side, until it gets step on by a Warlord. It turned out nicely, it really has that rusted and abandoned look about it, I might need to clean it up a bit as it looks quite messy. The colors for this was choose so that the model would not stand out on the base. I do not like when the base overpowers the model it should support. Next up is to start painting the feet and legs of the titan. 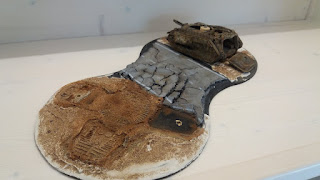 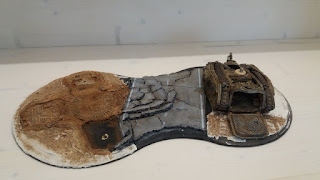 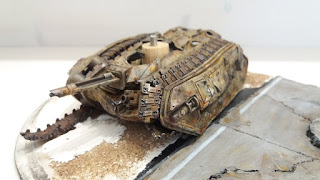 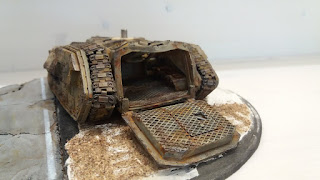 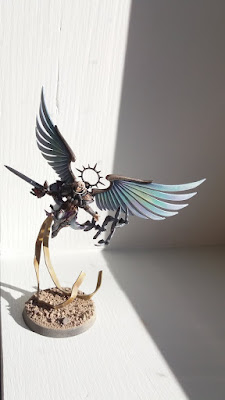 A few month ago I gave Saint Celestine to my wife as a birthday present. I told here that either she could paint it herself  to match her other sisters in her army, or I could paint it and try to match it to her earlier models. She opted for the latter option so this is kind of a commission work as she got to decided on the colors etc.
Her old models are silver with red and purple cloth, white casings on the guns and straight silver blades. 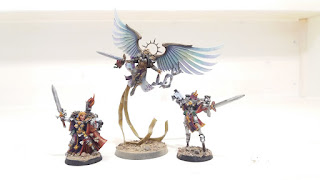 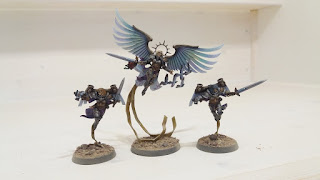 So I set to work. My basic silver painting scheme gives a slightly darker and more contrast rich color as I start form black and work my way to wards the brightest silver instead of starting with a metal base paint. So Celestine and here body guards are a bit darker. I stuck with the purple cloth, adding perhaps a bit brighter high lights, giving the fabric a more glossy look. For the wings my wife requested white but with the colored effect I earlier used on Magnus and Ahriman. For the blades I also used a multi-color blend even if it is very subtle. All in all I and most importantly, my wife, is happy with the outcome. I could have wished that some of effects might have been optional and that the models were not on the "flight" stands, but these are otherwise lovely models and if the mythical plastic sisters ever show up I might have to paint myself an army. 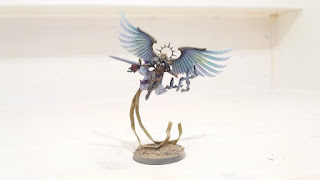 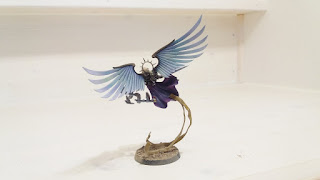 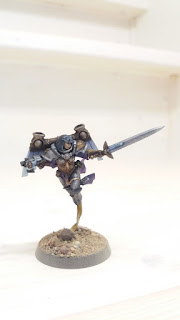 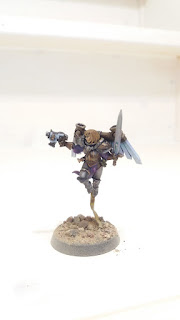