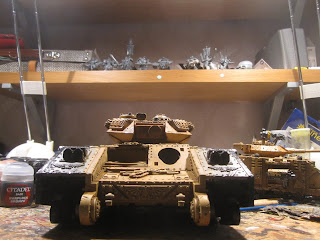 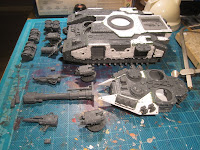 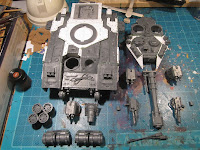 I have been busy at work and with the house now that the snow finally has gone. But I have managed to get some hours in on the Desertblade build. Once I got the hang of working with plastic card things moved along nicely. I wanted to keep as much of the detail of the original as possible so I keep the amount of plasticcard as low as possible but I still had to make a new top to the hull as I lowered the turrets position and extended the rear deck. Once the plasticard was attached I added some bolts buy using a wire and some paint. The wire picks up the same amount each time and you can just add it as a drop. Two or three times of this will create a raised bump. Much easier than making plastic nuts, especially as they should be rounded on marine vehicles. Once all the parts where assembled I gave them a coat of black and started painting. As I dry brush my models I have learned not to paint to large surfaces at a time as the drybrush will get clogged and you might get lazy if the areas are to big and not work them over properly. Currently the base colour is 15 layer of paint before adding detail and battle damage and weathering. The turret is now painted as well as the centre part of the hull. I am starting out on the track covering and the side plates, after this I will add details and such before starting on the smaller parts and final assembly. I do like how it is coming together. I suppose this will take me some time to finish. Then I have some marines to paint, but I have already come up with the next conversion project, it will be a dropship, smaller than a thunder hawk but larger than a thunder chick. We will see when that happens, hopefully the Desertblade will be done by then. 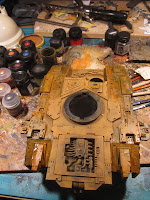 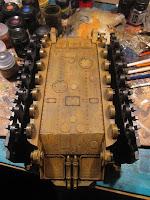 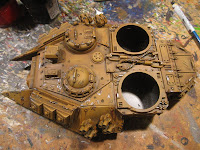 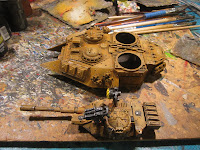 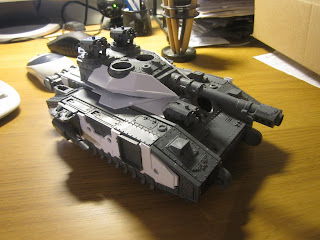 During ester I had some vacation from work and it was spent divided among fixing with the house, eating and drinking with relatives and doing some plasticard work. I have always been envious of those who can scratch build anything from plasticard and make it look like it came straight out of the GW factory. Me, I am just proficient in reassembling models in new ways making new models but they are basically just combination of parts already available.
Now I thought that I would try my hand at some basic customisation of a kit using platicard and a base model. What to build (as if I do not have a lot of unfinished projects as it is)? I have always liked the baneblade, ever since my first games of spacemarine. But I have never owned one, not in epic nor in wh40k. So a bandblade it would be, but my days as an imperial guard commander is far behind me, I only have time for my Chaos, Mechanicum and Desert Eagles. The Forge World Fellbalde is however a spacemarine super heavy tank used during the heresy which shows that marines could have super heavy tanks and it fits right in with my back story of the Desert Eagles. They are after all guarding an abandoned weapon storage containing wargear collected over a period of some 10k years, containing any thing from the heresy to current times spanning all chapters and so on (it is a mystery of how this stash ended up on a desert world and who put it there, but once found it had to be guarded).
In the beginning I liked the Fellbalde model a lot and I was almost about to by one. But as I though about it it looked to bare, I dont know how to express it but it is just tracks, with some rather flimsy side panels, some large las-cannon mounts and a cupola with two large pipes. Instead I decided to use the Banebalde model and some plasticard to make my own version of the Fellbalde. So I started searching the net for what other people had done, mostly it came down to two approaches, either you just take the Baneblade, paint it in marine colours and say it is a Fellblade or you by an upgrade kit from a company ( have no clue which one they use, but they all look the same) and add it to your Banebalde kit. 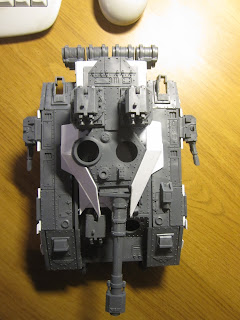 To get a feeling of what I could do with the original kit I stated to play around with MS paint and some pictures of the Banebalde and soon came to the conclusion that it would look much better to make a model based on a modern tank like the M1A2, T90, Leopard II or Merkava and paint it up for my Desert Eagles. This also meant that the original Banebalde weapons out fit would be more suited for this build than the dual barrel turret of the Fellbalde or the quad lasers. However, the Banebalde is very similar to a post worldwar II tank like the centurion and it needs quite a substantial rebuild to look modern and like a space marine tank. So the M1 Desertbalde was borne. I made some ad on side plates to go over the original side plating but kept it small as not to loose al the detail. I also bought some Landraider upgrade kits, ie some predator parts, so that I could exchange the gun turrets of the Banebalde with marine versions. I also choose to swap places between the twin linked heavy bolters and the las-cannon turrets. I also decided to remove the housing beneath the turret and lower it so that it came more in line with the track coverings. This however meant that I could not mount the heavy bolter turrets on top of the track coverings where the las-canons used to be as the turret would hit them. But this was solved by my need to make the turret larger to match the look of a modern tank. I added some angled plates to the front of the turret and some gun boxes to the back, putting the Heavy bolters on top of the turret. I also made some changes to the back, removing the shrine and the double barrels. The back is now sloping upward like on the rihno and the fuel barreles are mounted in a row across the back.
Well that is as far as I have come, now the model is resting before I add some more details, I find that it is not good to do the build in one go. In stead I let it bee for some time and then I come back to it with fresh eyes and see if it still holds up. So this might not be the final look but so far I am happy with it.
Upplagd av Agis kl. 12:52 1 kommentar: