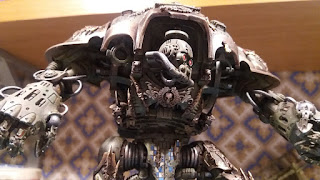 This week I have focused on finishing the armor plating for the Gatling Knight. I did not get as far as I would have liked so there are still the shields for the fists and some other small plates left to do. But it is coming along nicely. I did try my hand at some free hand motifs on the shoulders, beneath the chaos growths. I tried to make it look like the designs are flaking of and giving them a worn look. The growths are however in the middle of it so it might be hard to see what it is meant to be. On the left shoulder it is supposed to be a shield and on the right a winged shield with a talon. One thing that is nice with painting it like it is flaking of is that I do not need to be as good with the free hand.
As i mounted the torso to the legs I noticed a clearances issue with the ammo bands and the knee on the right leg. This is something I will have to look into and see if I can fix in a good way. Well that is it for now. 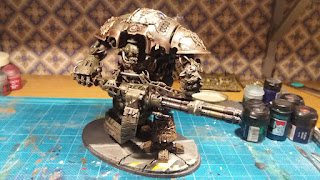 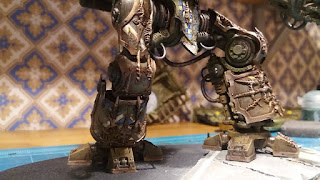 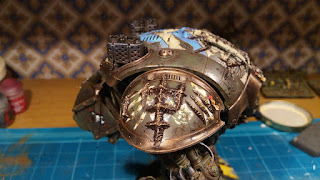 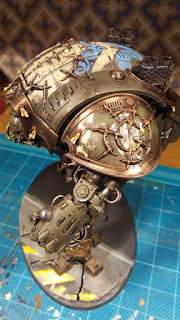 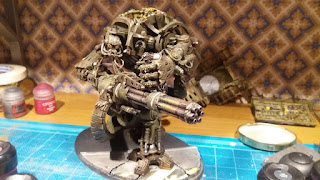 This week I have once again been away from home so there has not been much time to paint. I did however manage to finish two more Electro priests while away and this week end I managed to get a few hours in on the knight with the gatling. Not much to say relay, it is still a work in progress and the pose might not be 100% as I just mocked it up to see what it looked like. Once the arms are done, I will do the leg armor and then I can make the final pose. I think it looks good so far, so I am happy. 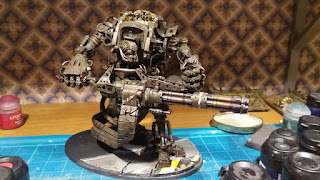 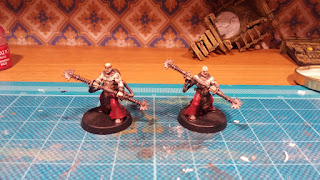 It has been some time since my last post. That does however not mean that I have not been working. There has been some holidays and family occasions which have taken a large chunk out of my hobby time but the most time consuming has been building my new models cabinet. Our house is shaped like an L which means that on the second floor the rafters are intersecting in the joint between the two house bodies. This area would normally just be a dead space in the wall, but instead of sealing it up we decided to build a shelf with some storage there instead. I had hopped that it would be an easy build but it turned out that the space was not just 45 and 90 degree angles so I have been running up back and forth between the garage and the hobby room trying to get everything to fit. It is not done yet but most of the difficult stuff has been done. Now I just need some lighting and some glass doors. The I need to see what will move from my glass cabinets to this new cabinet.

Since I have also be working this means I have been away from home a bit to, so I had time to finish my Kataphron destroyers. I like these models but I am not sure that they fit in with the mechanicum. For me Mechanicum are walkers, not tracked... . Here I thing GW/FW missed out an opportunity to make some really unique transports/tanks.

And at home I painted my first Tzaangor. Here I choose the same color palette as I used for Magnus and Ahriman. I think the multicolored metal I used of Magnus really works for these guys. Still have nine to go, and some sorcerers.
I have also been painting along on the inside panels for Varangian. I think they are turning out ok. I which there would have been an official inside for the Titan, but I guess this have to do.
I am also trying to finish of the Knight I have been working on for some time. Here it is mostly painting all the green parts and getting the pistons etc blocked in. As soon as that is done I will do the armor panels.

So even if there has not been that many posts about it I have not been idle. Hopefully I will get back to some more regular blogging now that the cabinet is coming along.