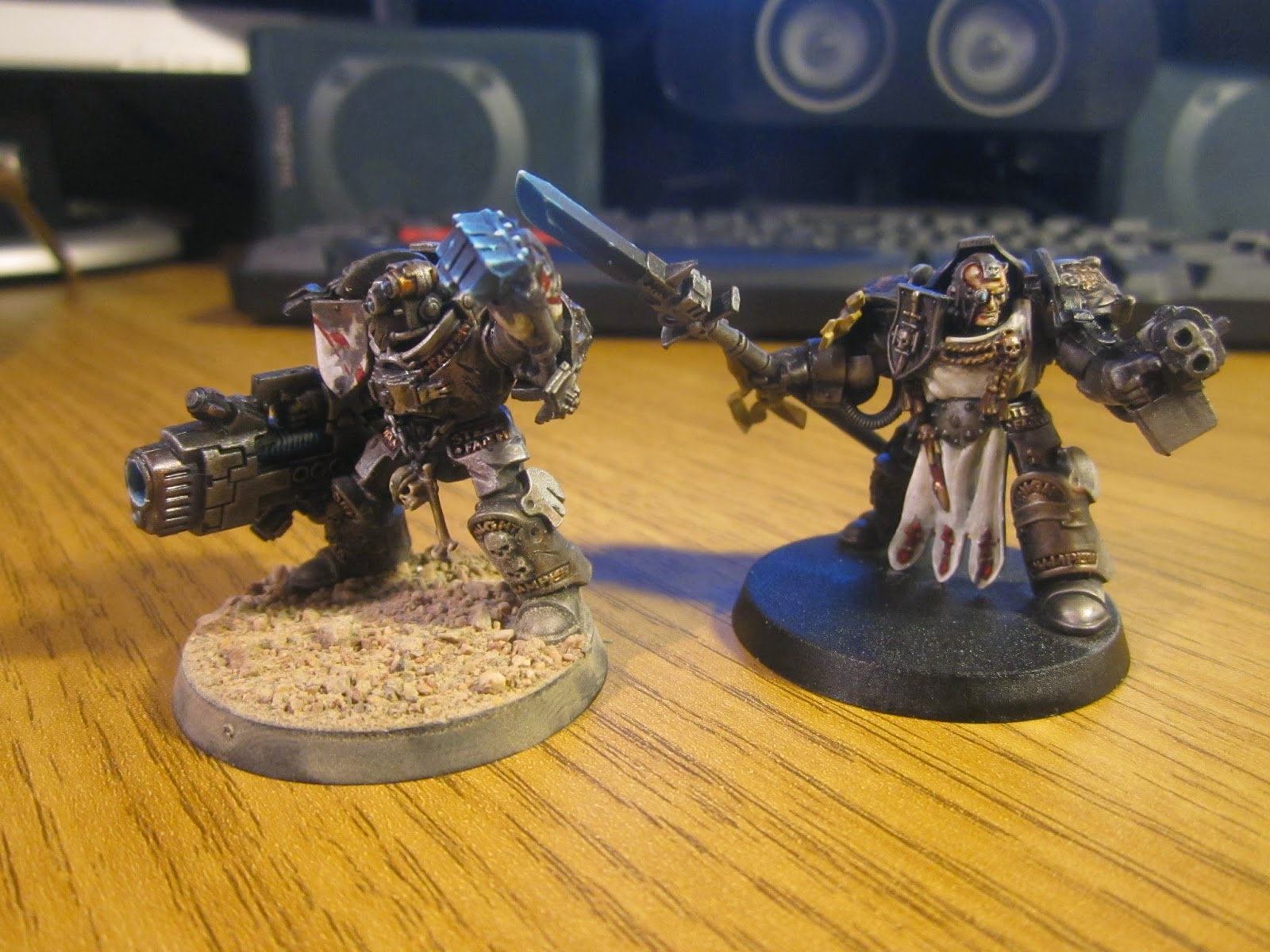 I usually do not go back to a model that did not turn out as I had hoped, instead I tend to build a new one and hope that it will be better the second time around. However, the Grey knights that I bought a while back was never meant to be a large number of models, I just got inspired when the Lord Inquisitor trailer came up. I made a plasma carrying guy with a flamer on the other hand and a short blade. It all looked better in my head than what the model turned out to be. So I decided , that since I don't have or plan top have more than this squad of Grey Knights I might as well fix it. So I removed the flamer and replaced it with a power fist. At the same time I assembled the last two remaining models, a sergeant and the banner man. The sergeant got painted together with the replacement arm, the banner man will be up next. I might by more boxes of grey knight for the parts in the future and as such might end up with more of these guys any way. We will see. 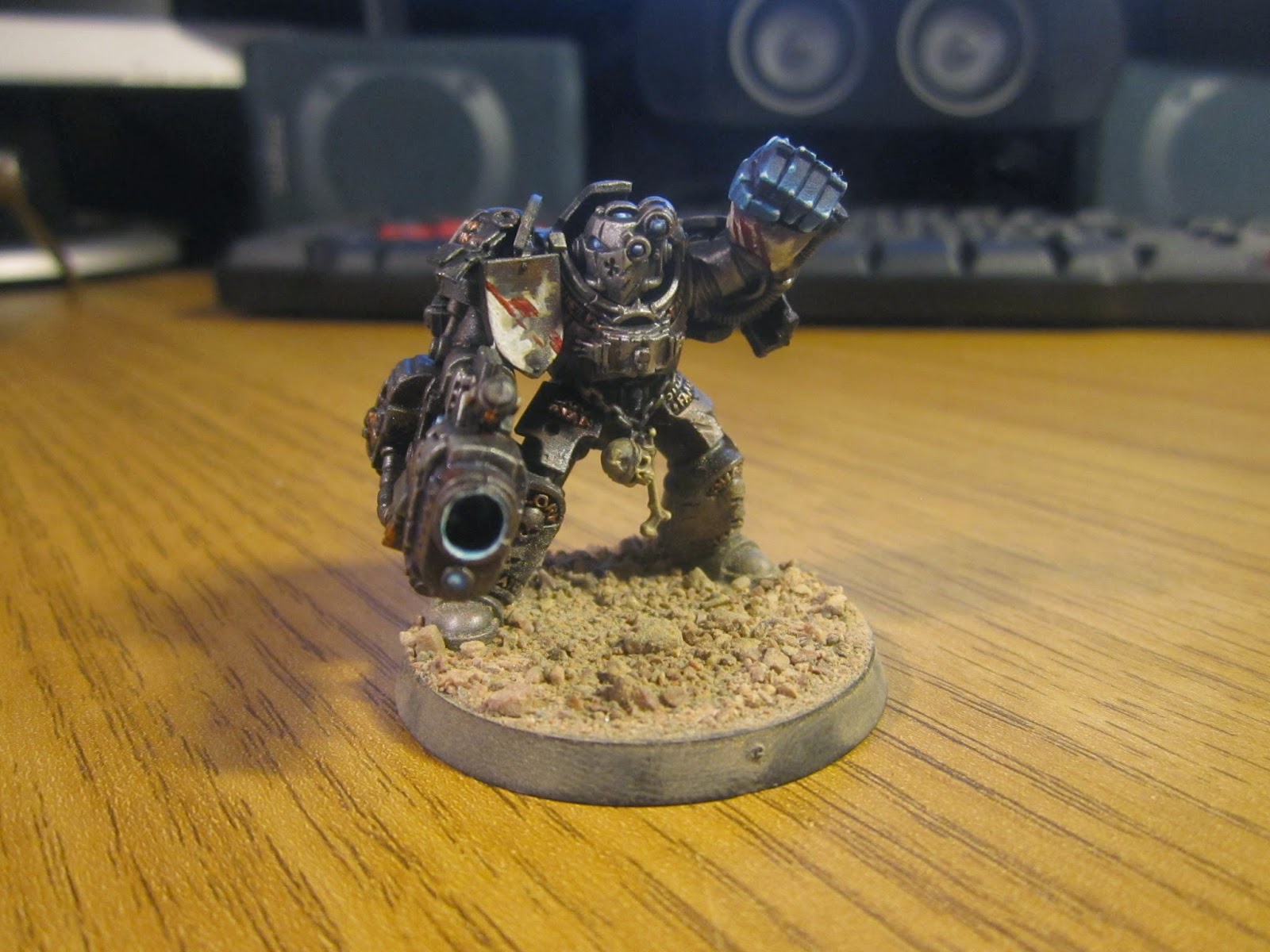 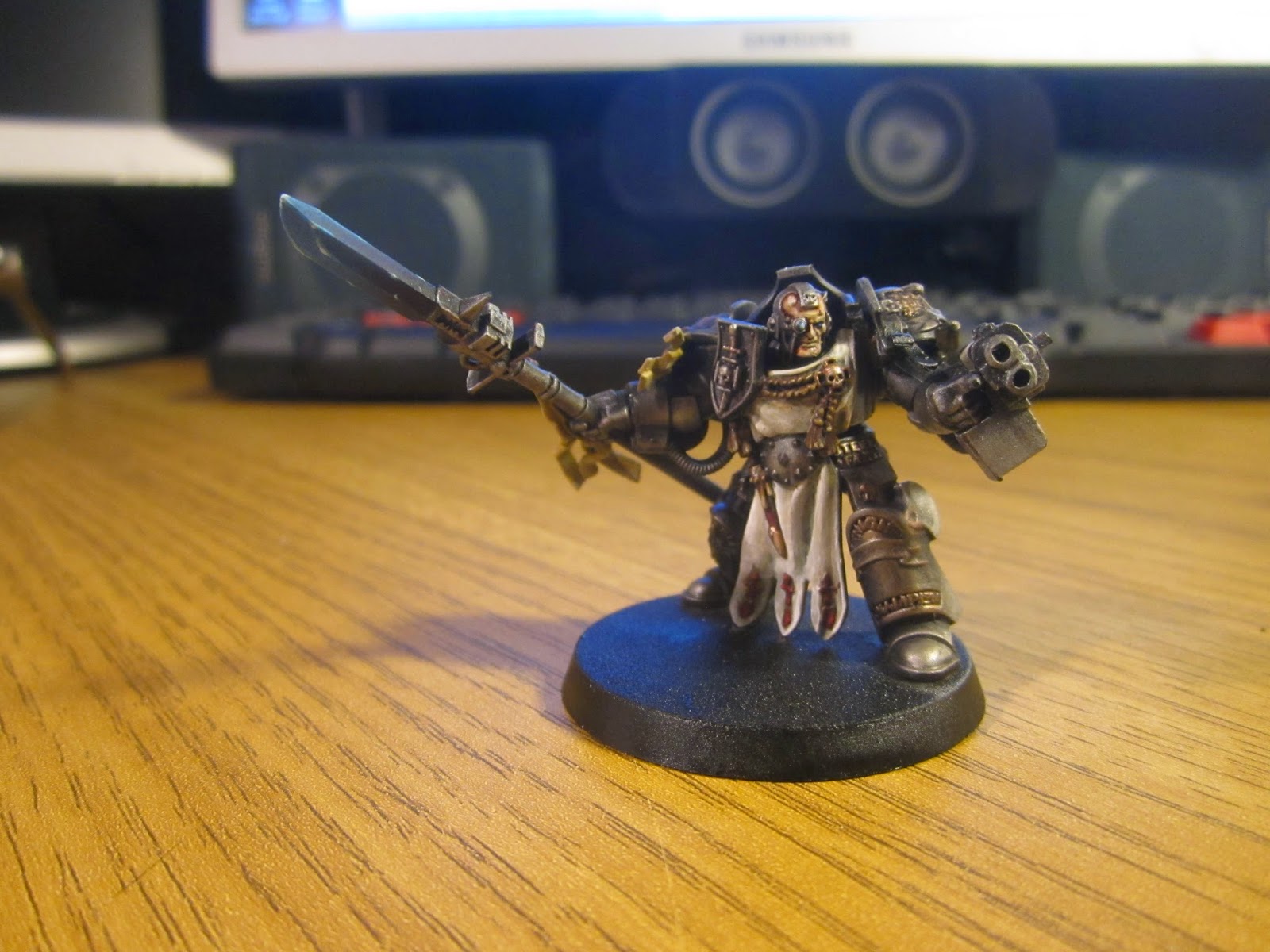 Some random stuff that has been going on. 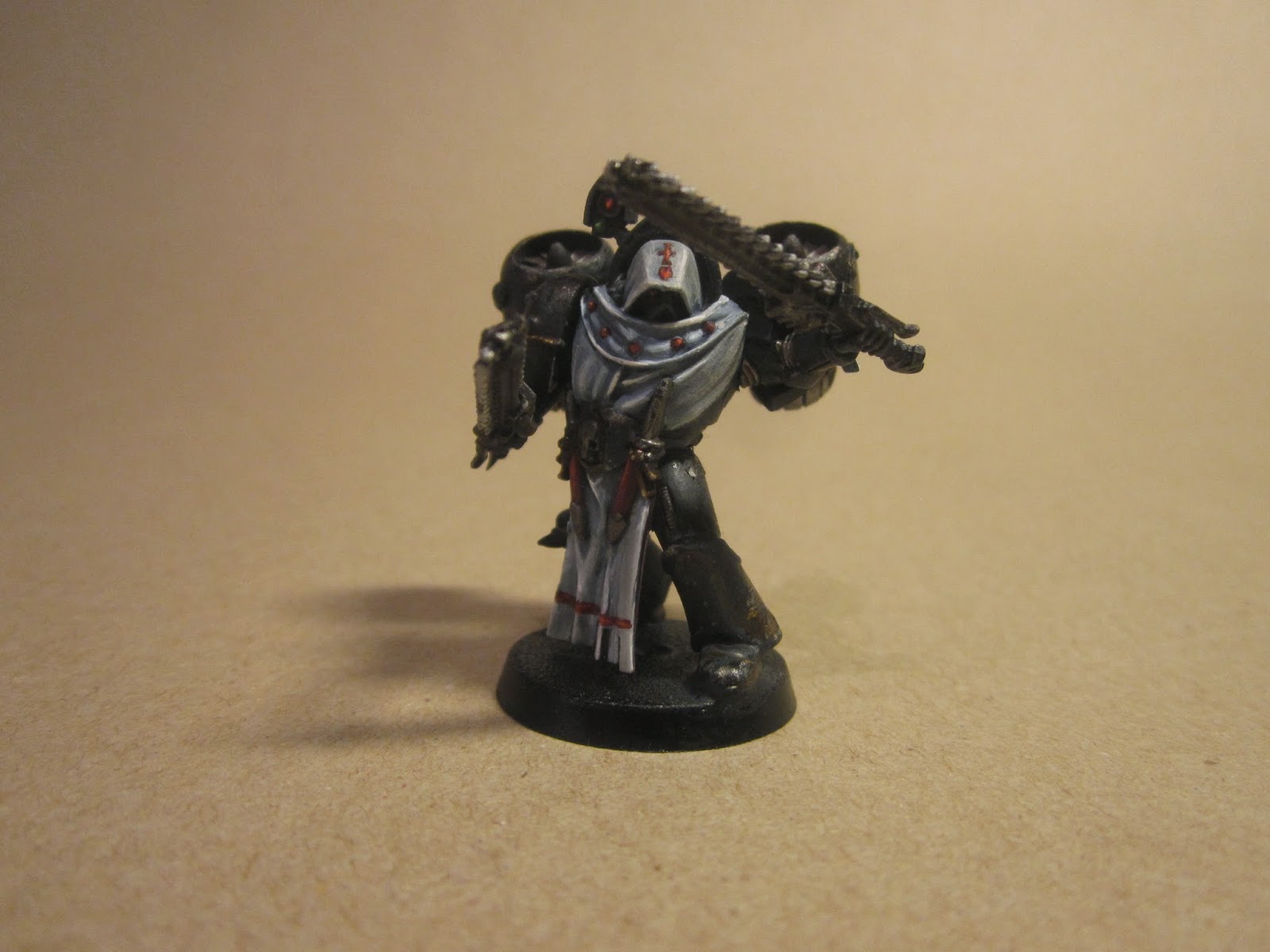 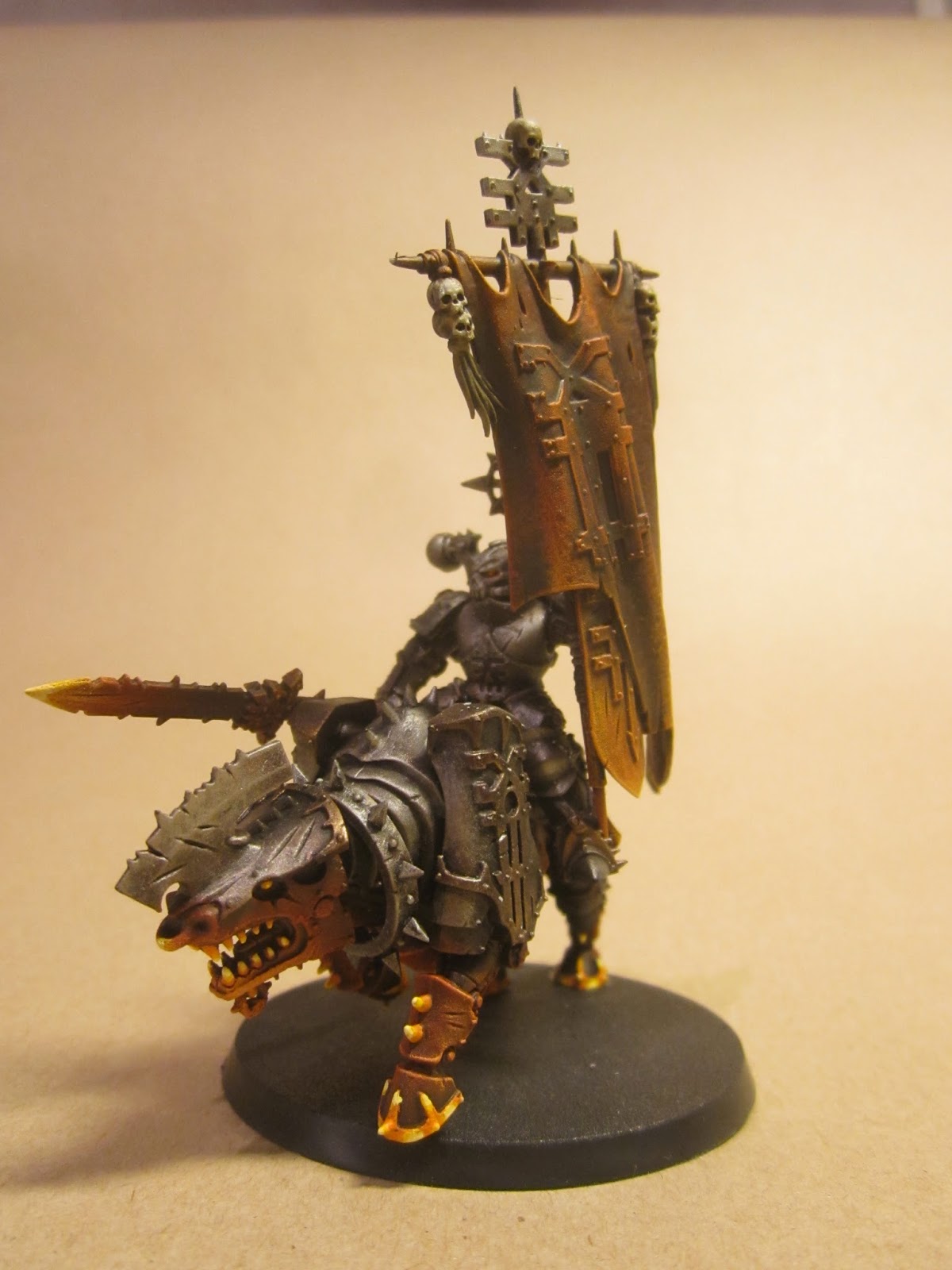 So, here we are again. I have not been able to finish of any large models lately so this will just be a short update on some of the smaller things. Fist I assembled the last of the Khorne Blood crushers/marines on juggernauts. This one has a standard but is otherwise pretty much the same as the other two, I am not sure if I like how the contrast between the shield and the banner turned out, but for consistency with the rest of the squad I will leave it as is. 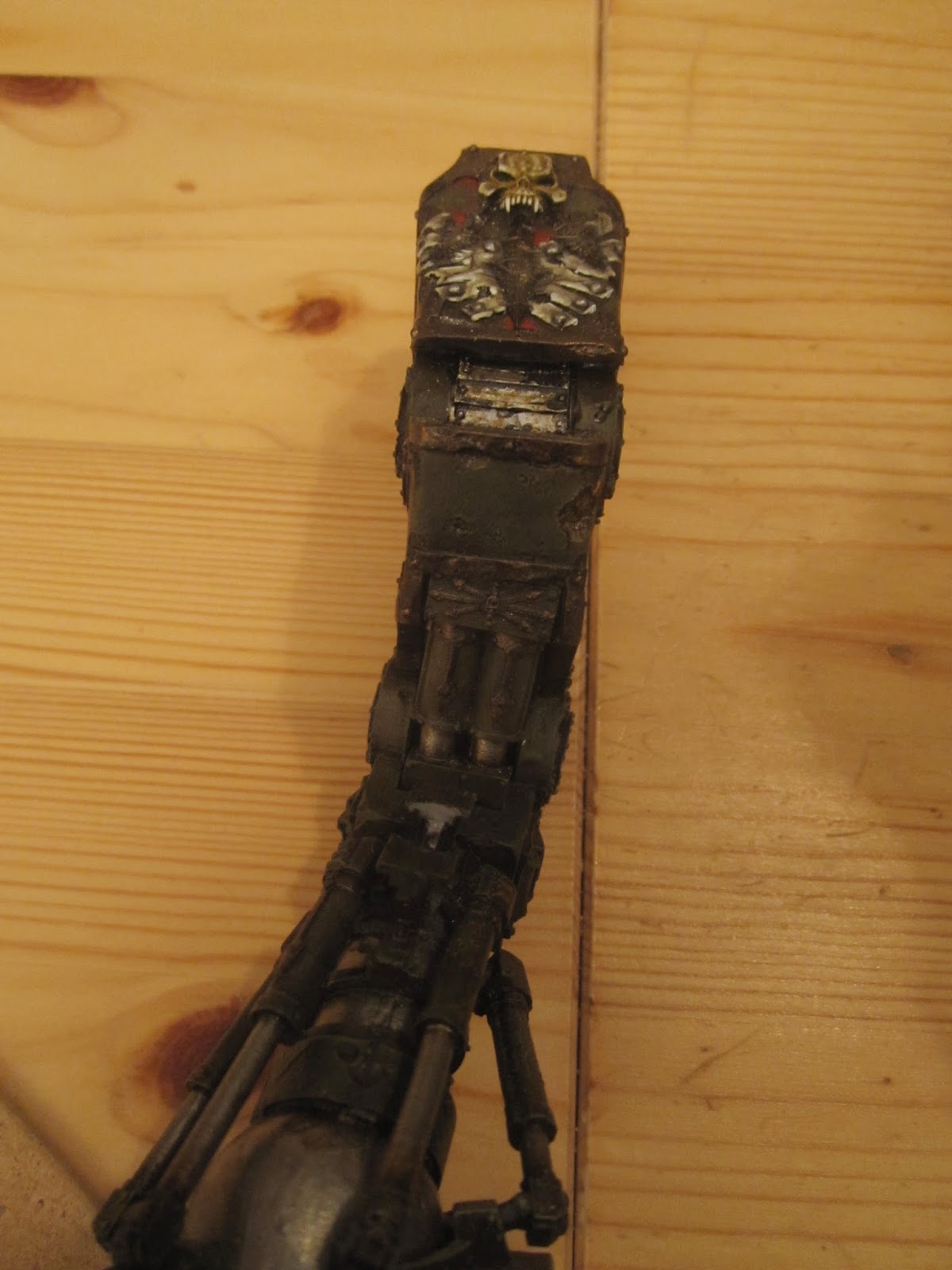 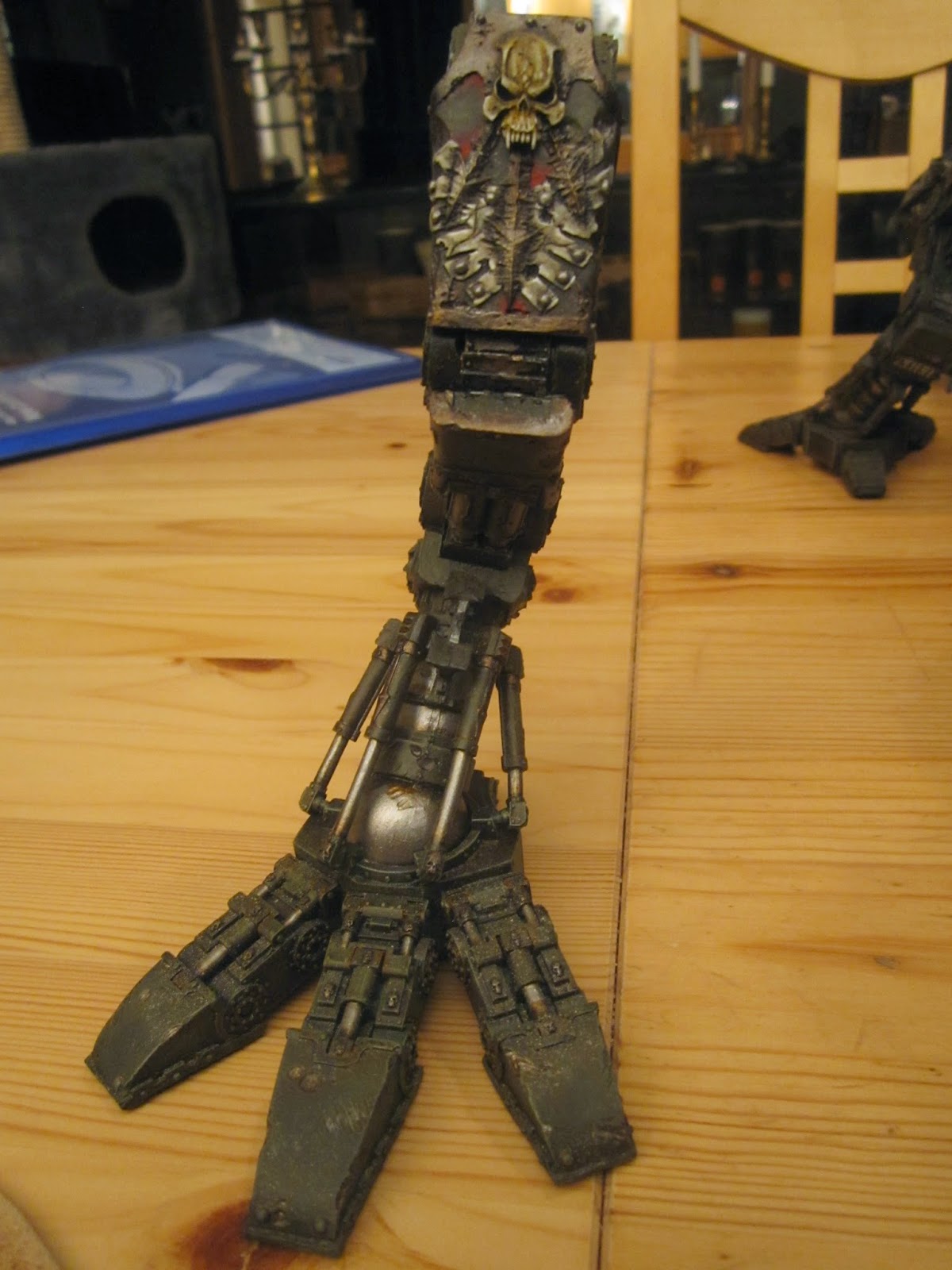 Then I also had a bit of a rescue mission. As I mentioned in a previous post I had noted that one of my War hound titans, Unbearable Perversion, which is in a dynamic walking pose had started to lean over more and more. When I built the titan I made sure that each leg could stand on its own and that when attached to the pelvic the plane for the upper body was horizontal. Once assembled it balanced well on it own. As it did balance by it self I did not mount it on a base, as I tried to keep the foot print as small as possible. However, quite a lot of the weight of the titan is resting on the front leg as it as both its feet in a row with the back foot of on its toes. As the model was standing on a glass surface the back for did not have any grip on the ground and any force transmitted through this leg meant that is wanted to slip backwards. This put even more weight on the front leg and the knee started to twist and bend as the top of the titan wanted to tip over. This part of the leg is also quite fragile as it only consist of a thin resin plate joining the upper and lower knee joints supported by the added piston assembly The front leg also started to come apart at the joint between the leg and the ball joint, joining the leg to the pelvis. So I had to pull the leg assembly apart, straighten the leg with a hair dryer, make a base to join the front and back leg, and reassemble it again. I am hoping that joining the feet at the ground will help with the forces a bit better as the back leg cant slide out from under the titan again. When I was making bases I decided to put bases on the other two titans as well for symmetry. They are so far un-decorated but I will get around to it eventually. 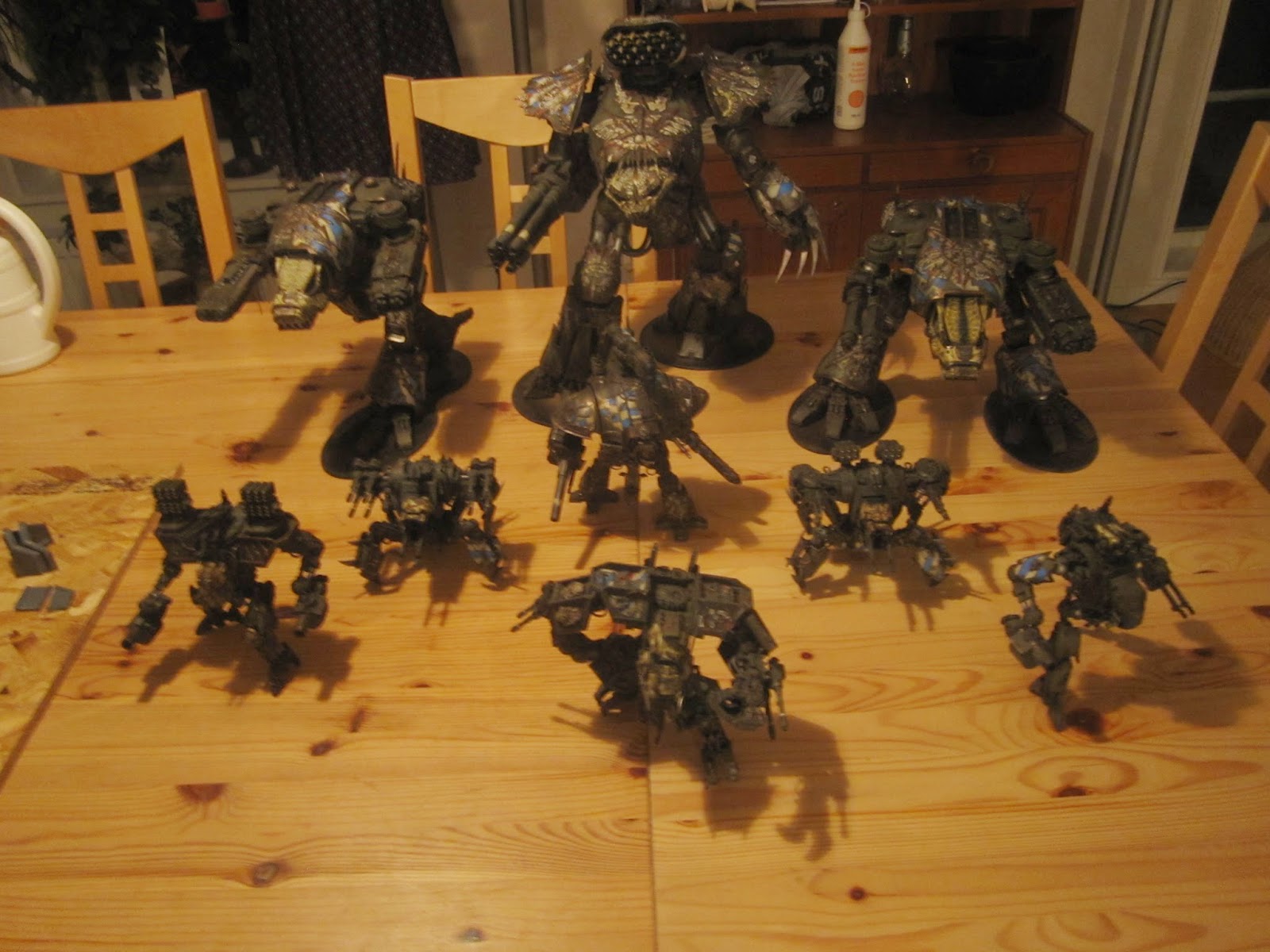 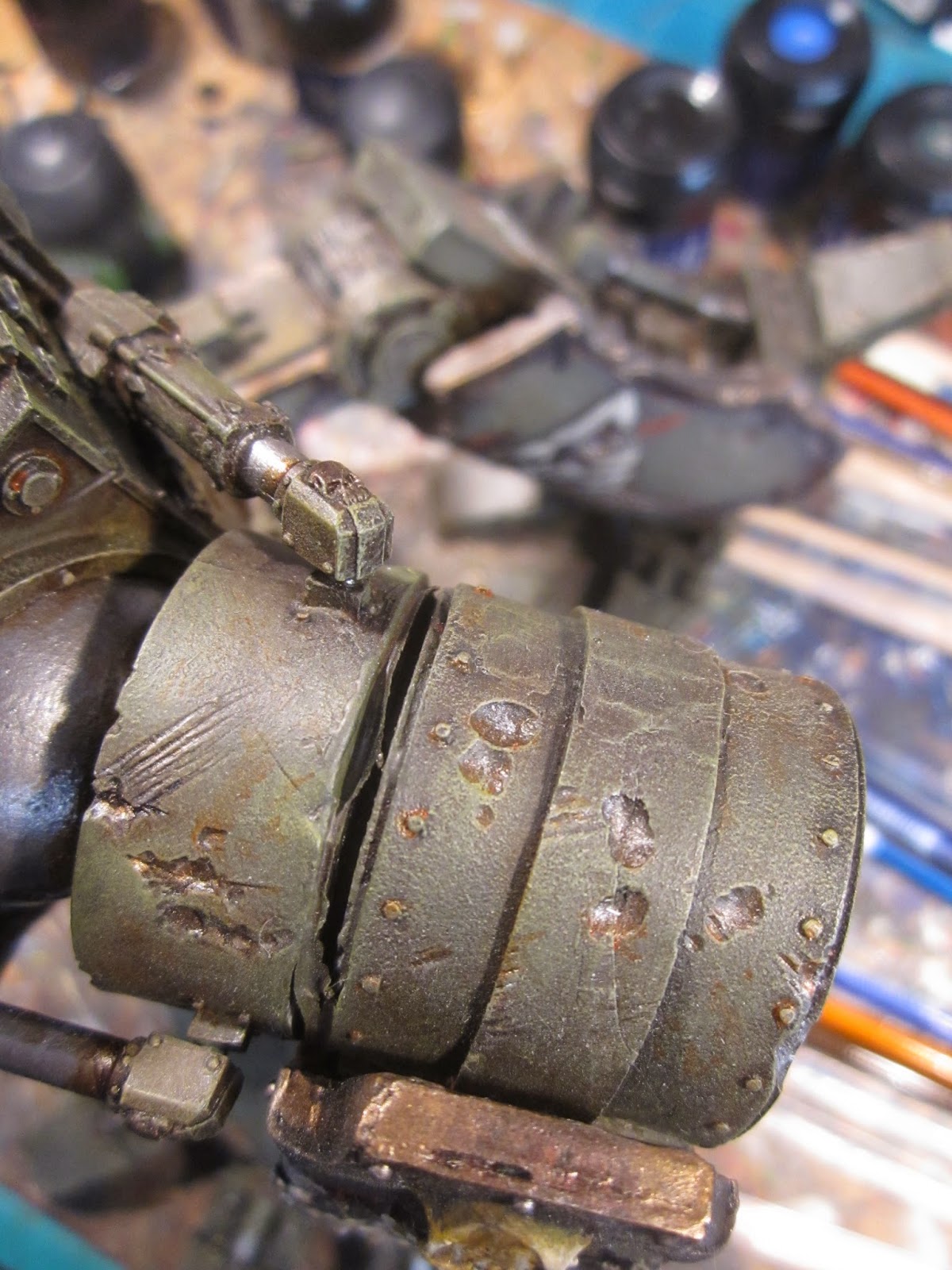 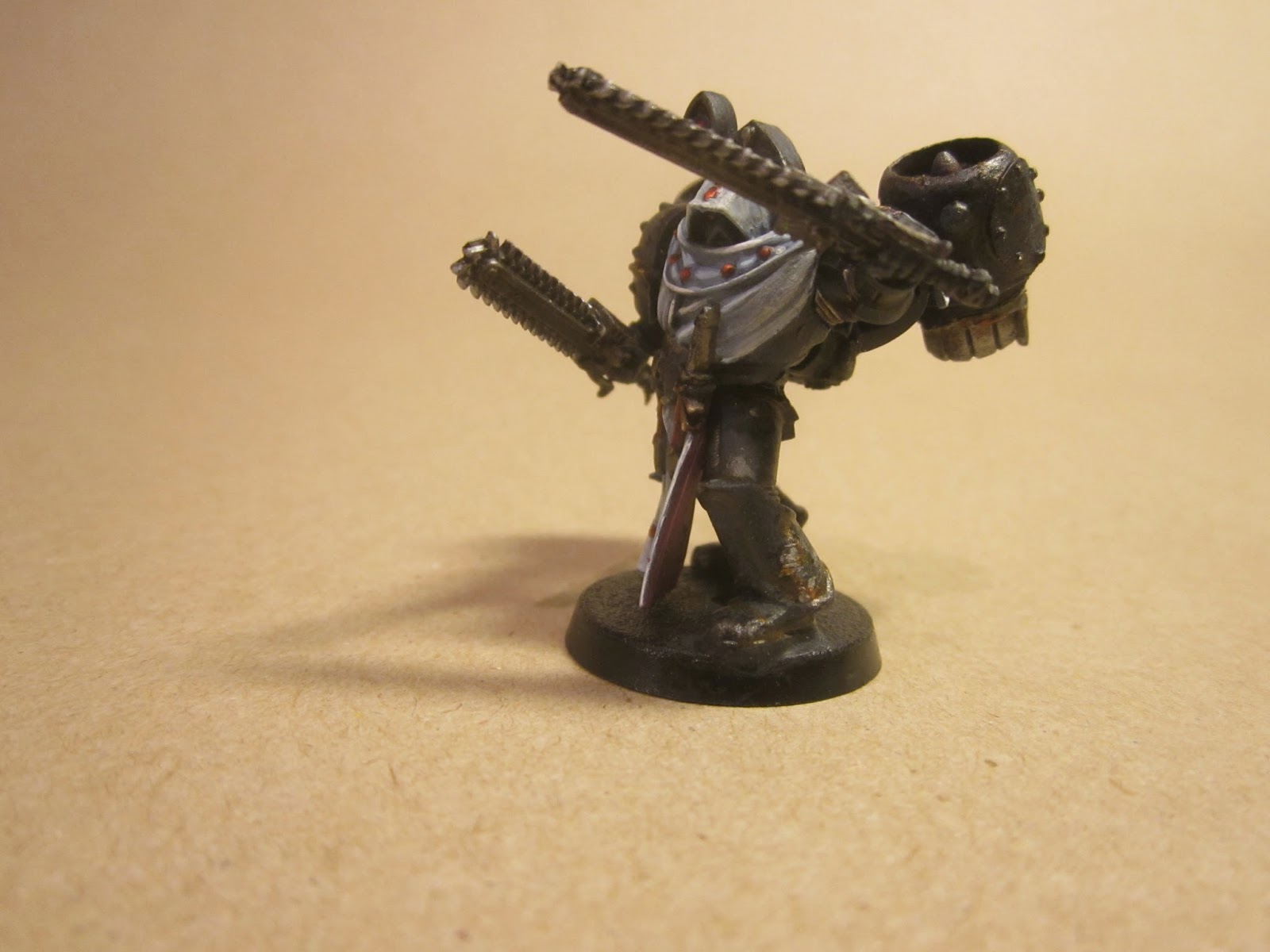 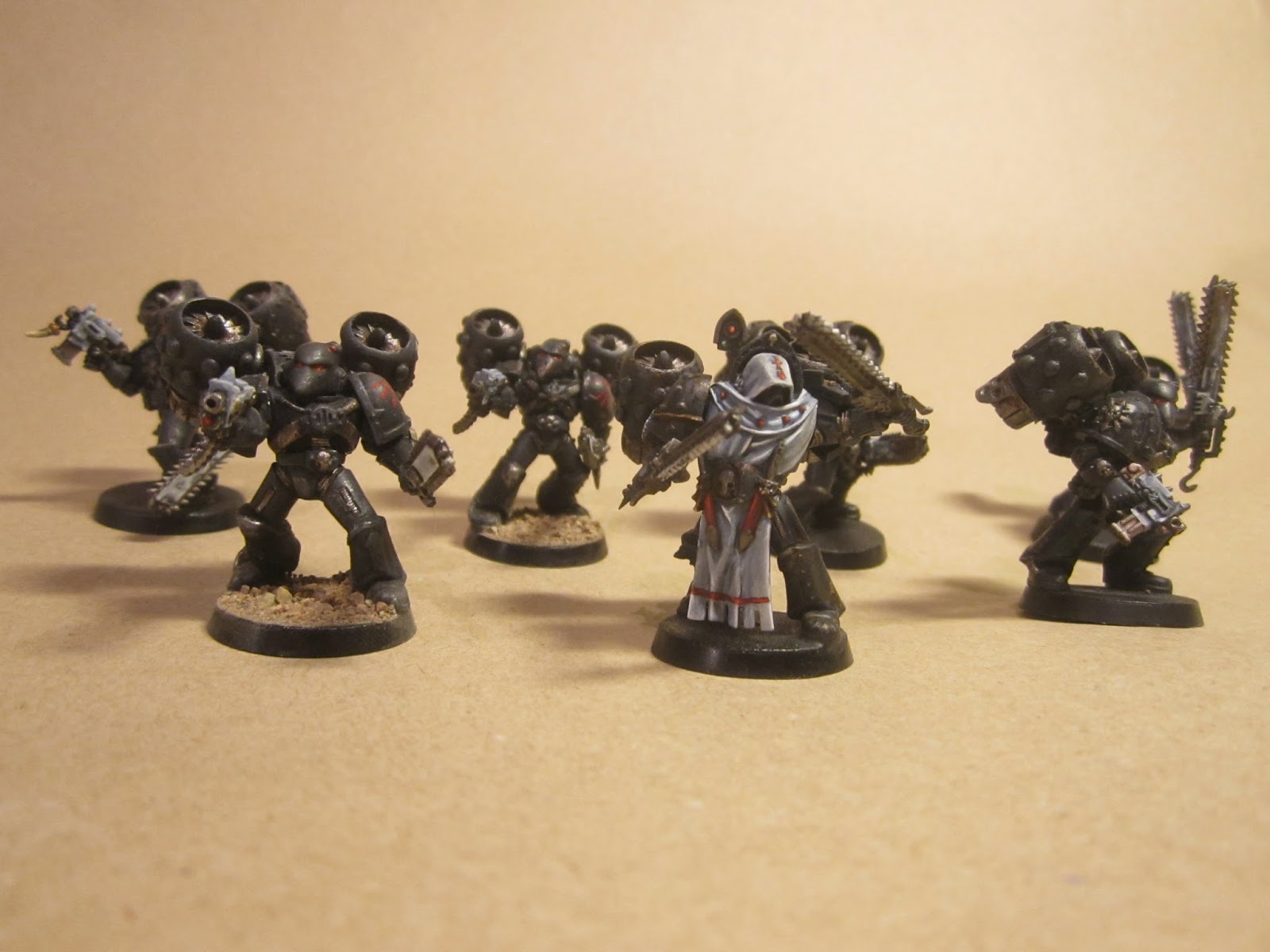 Lastly I present the sergeant for the Fallen Dark Angels jump infantry. I thought that the sergeant from the Dark Vengeance set look much better with the tabard rather then the traditional full robes of the Dark Angels so I decided to try to make my own version of this. As this aesthetic also carries over in the Death Wing set I decided to try to marry a chest piece from the Death Wing with the back peace of a normal power armor. I think the result is quite nice even though I had hoped for a better fit between the two pieces. All in all I think the Jump Infantry is looking the part with the black armor and their pre-heresy jump packs. Well that is all for now, I will keep shipping away at my stock of unpainted and un-built models and we will see what turns up here.

Update from away from home

Just a short update on the Khorne daemons I am working on when I am not home. The last Blood Crusher is mostly done so I will pack it up and bring it back home for assembly. The Drake Rider is now underway and I am almost done with the Drake body, one wing left. I am quite happy with how it is turning out. I almost forget that is assembled from parts of different models, just some small unevenness where different parts met, but over all I find the parts looking good together as the style is similar in their design. It is going faster then I though to paint it so it might be done soner than I though, well, I will have to find something else to paint. 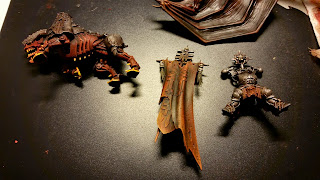 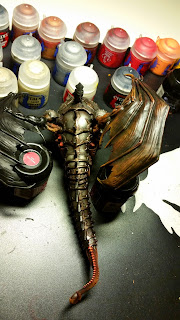 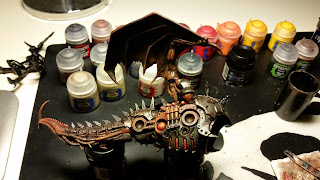 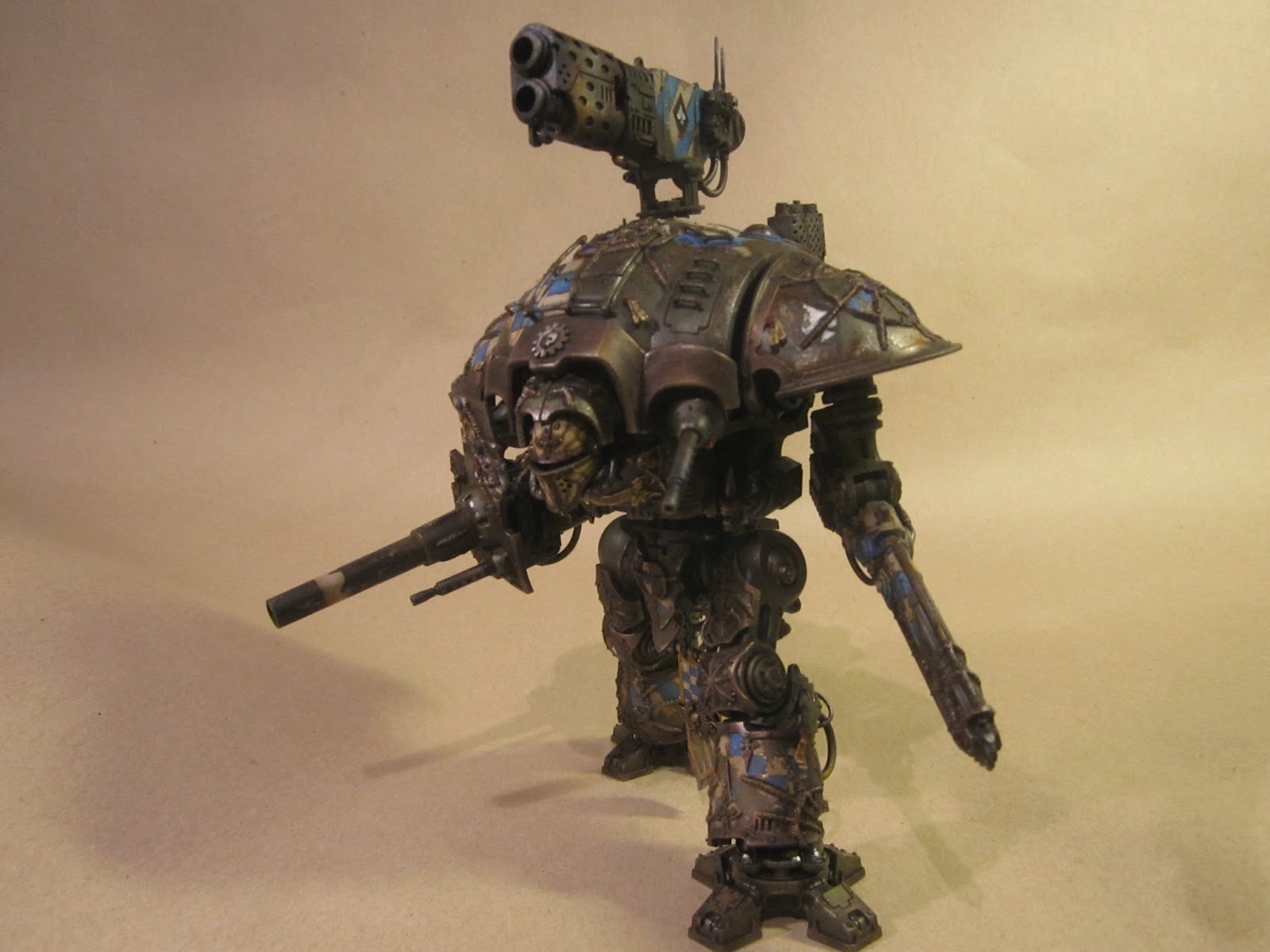 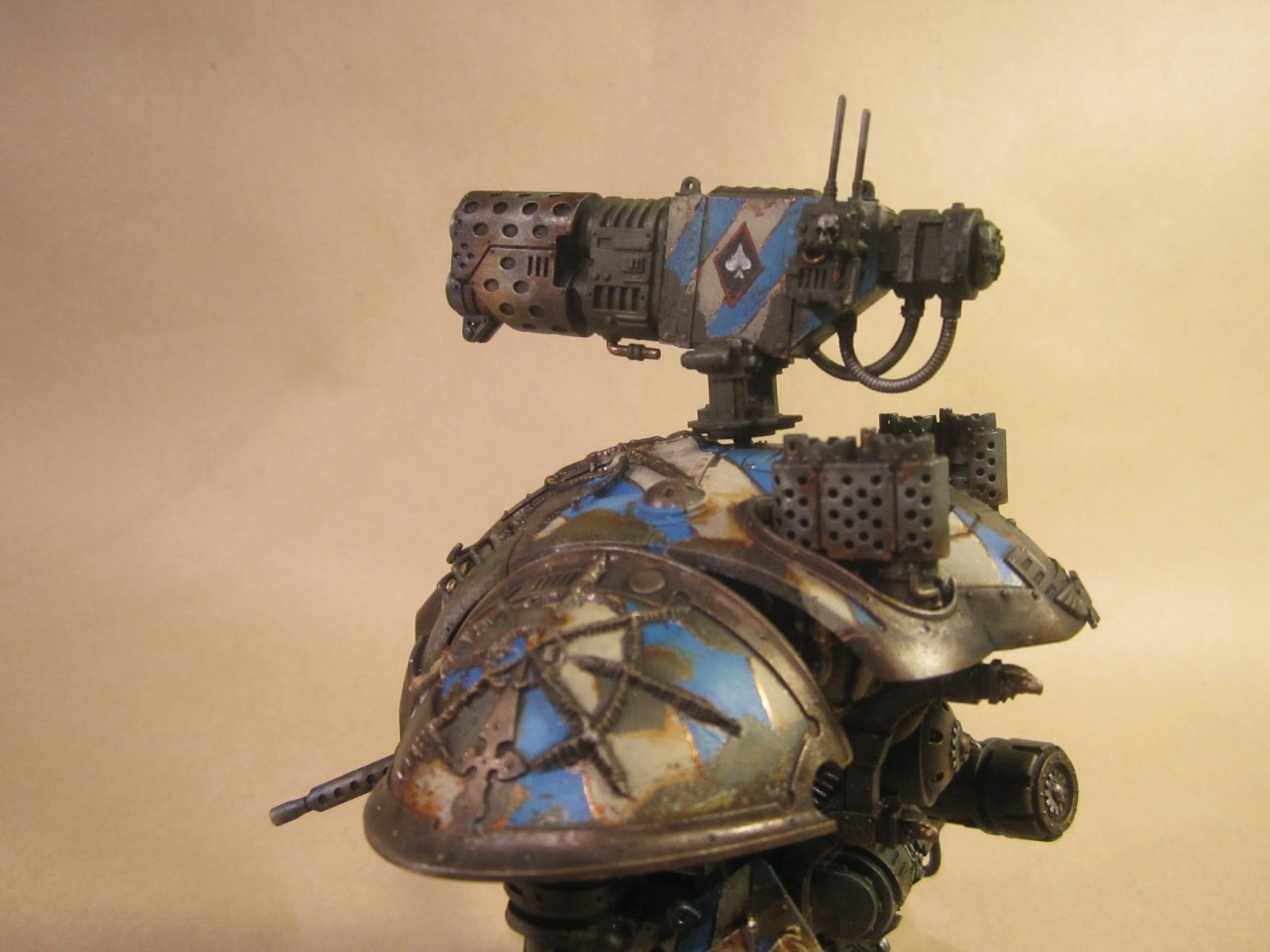 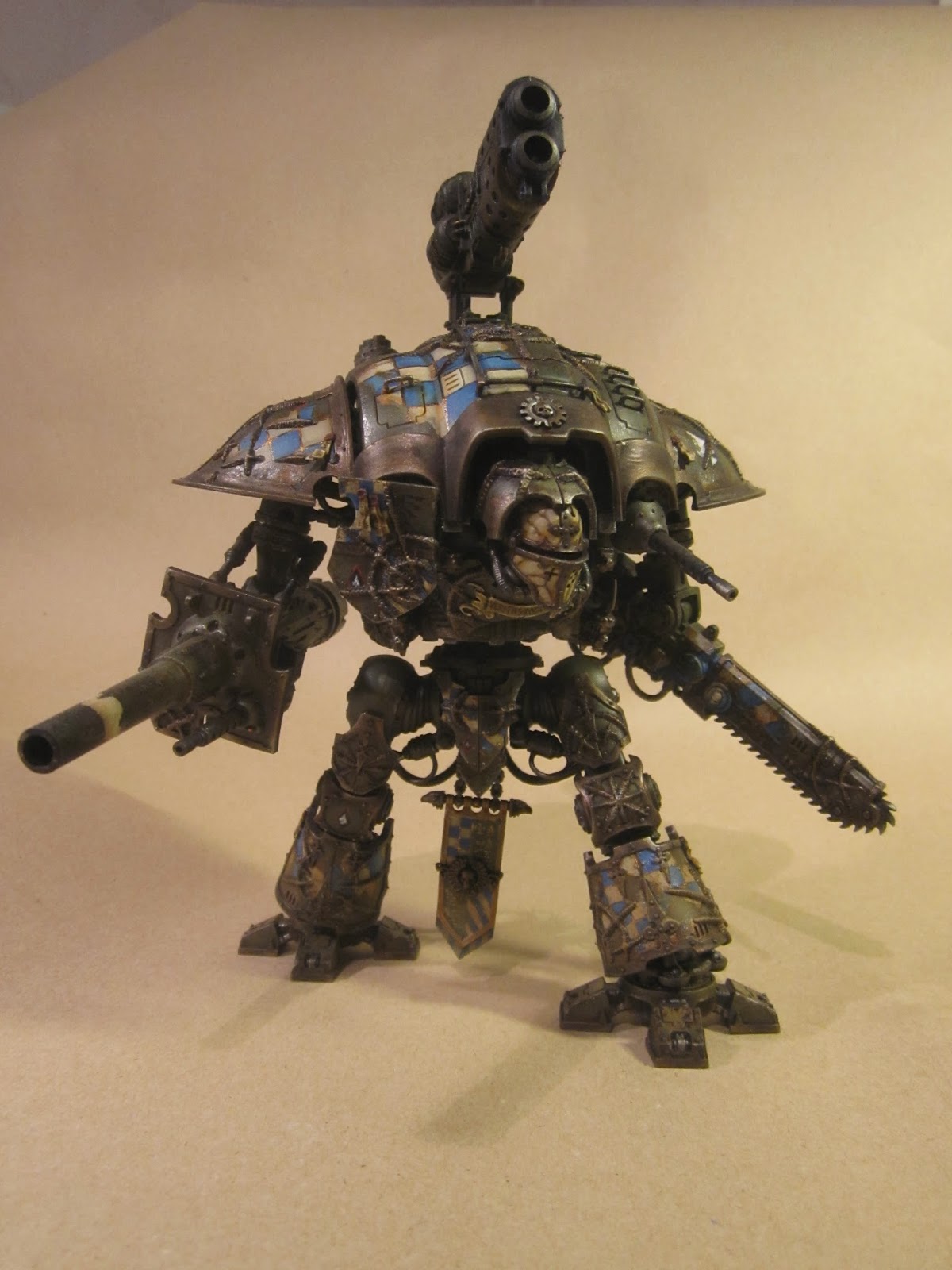 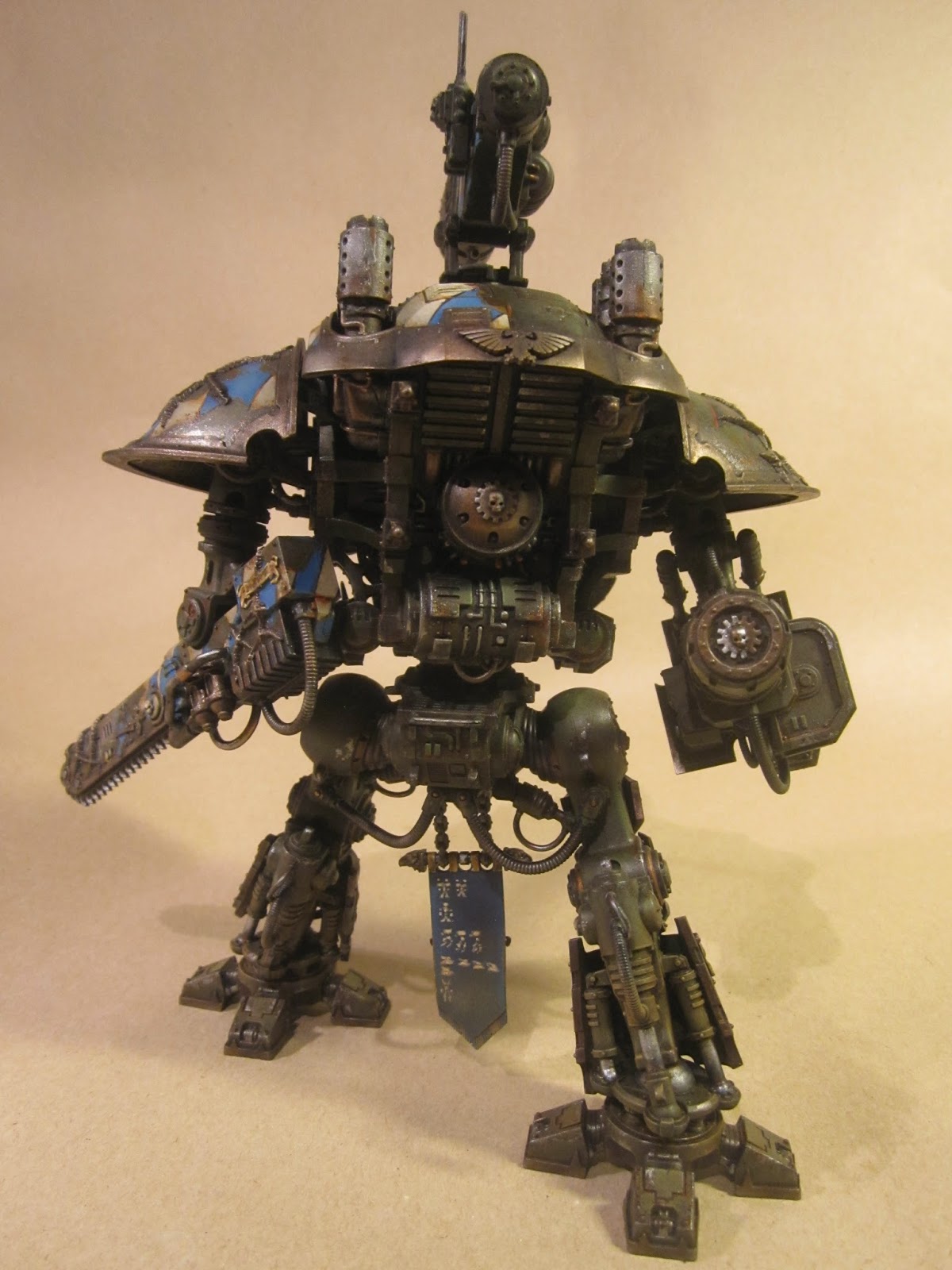 Ever since GW released the Imperial Knight Kit I have been a bit upset about the lack of build options with the model. Most other kits nowadays have  multiple weapons set ups etc. The knight kit only has two weapon options. FW is cranking out some nice alternate builds but so far you cant buy the weapons separately so that is not an option at the moment. When building the Knight I have, I decided to build it with the rapid firing battle cannon on the arm and not to magnetizing it, as I have seen many others do. This left me with some spare parts and as I am thinking about a new Knight build I wanted to test if I could build a back/shoulder mounted Thermal cannon from the parts left over. This is just a quick build as it is more of a test than a sharp version. I painted it to match the knight I have and mounted it in the hole behind the driver compartment. It looks a bit bigger on the pictures than what it really is due to perspective but I think it looks nice. I know that it is not legal in game termes but as it is removable it is not a big deal. I am not really sure this Knight will have it mounted like this at all. It might get transferred to some other model later on. We will see... 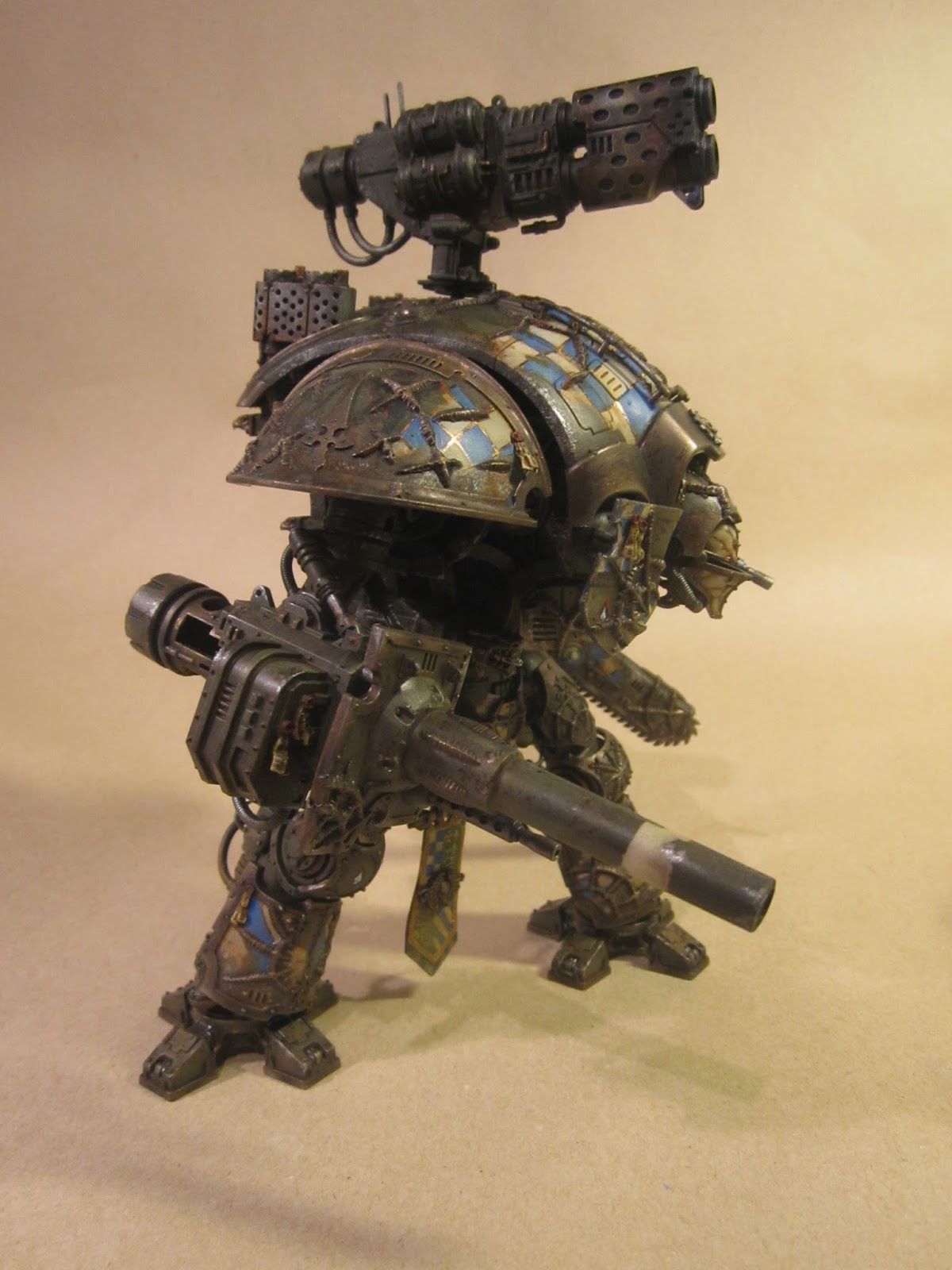 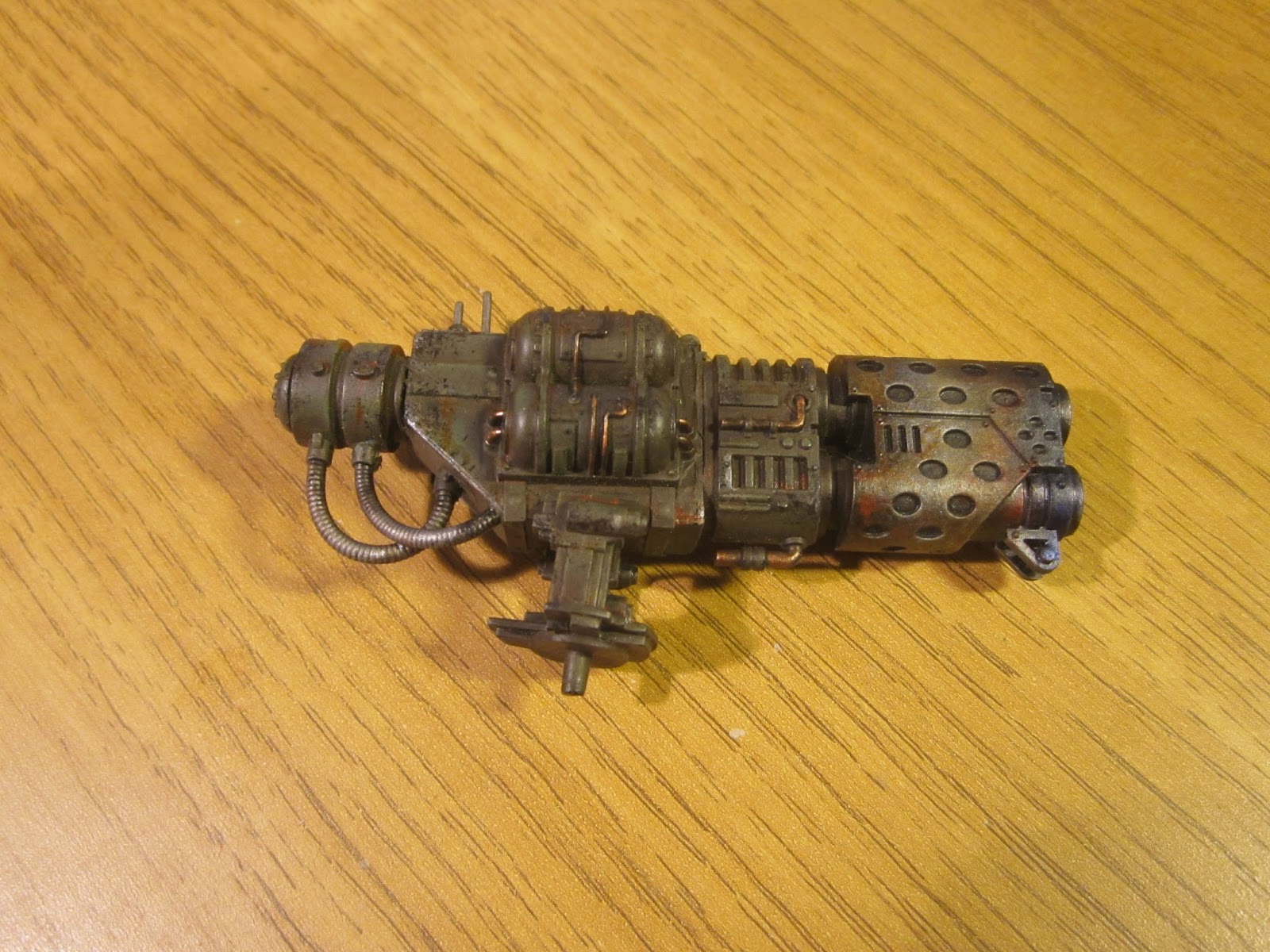 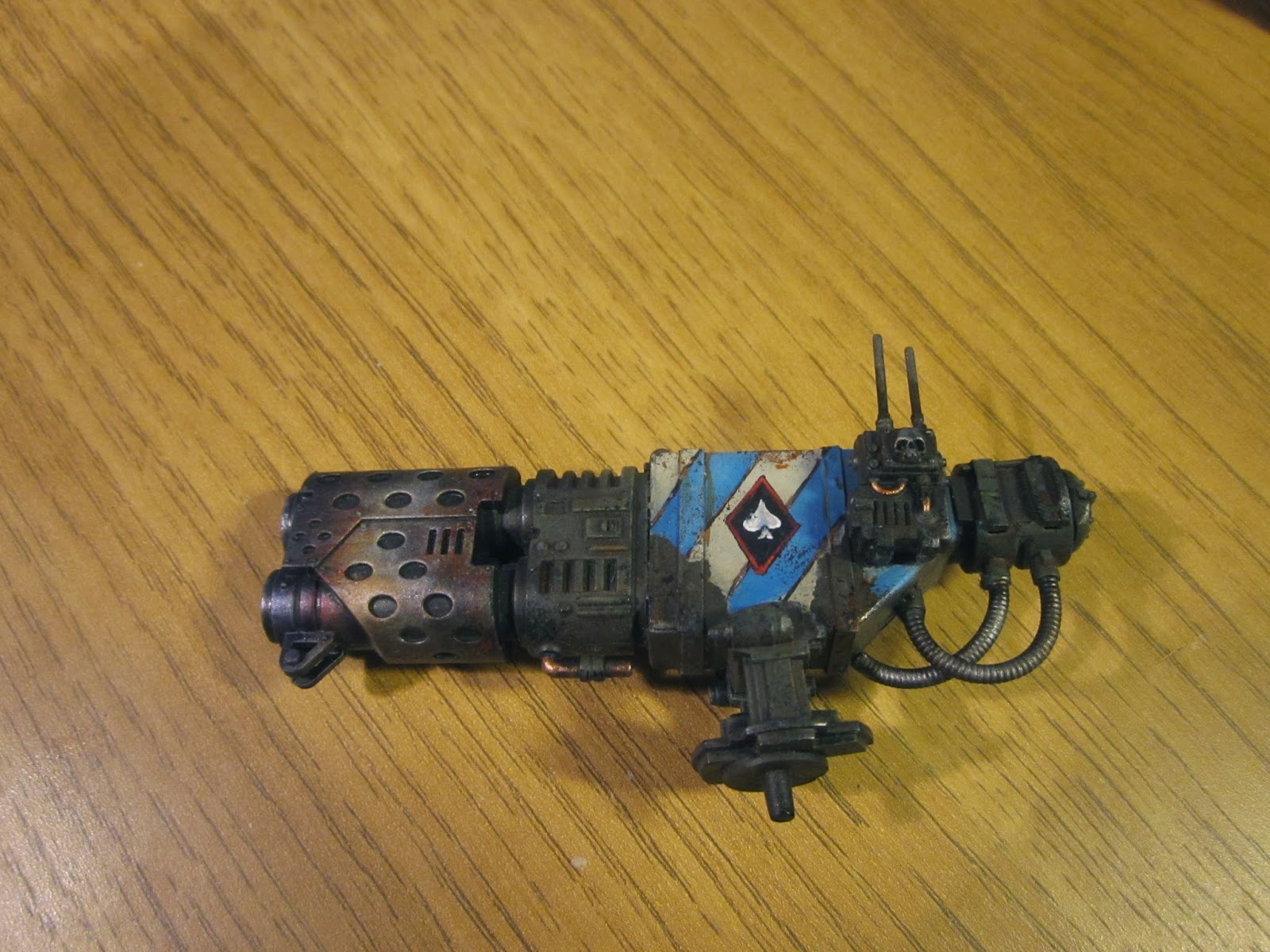 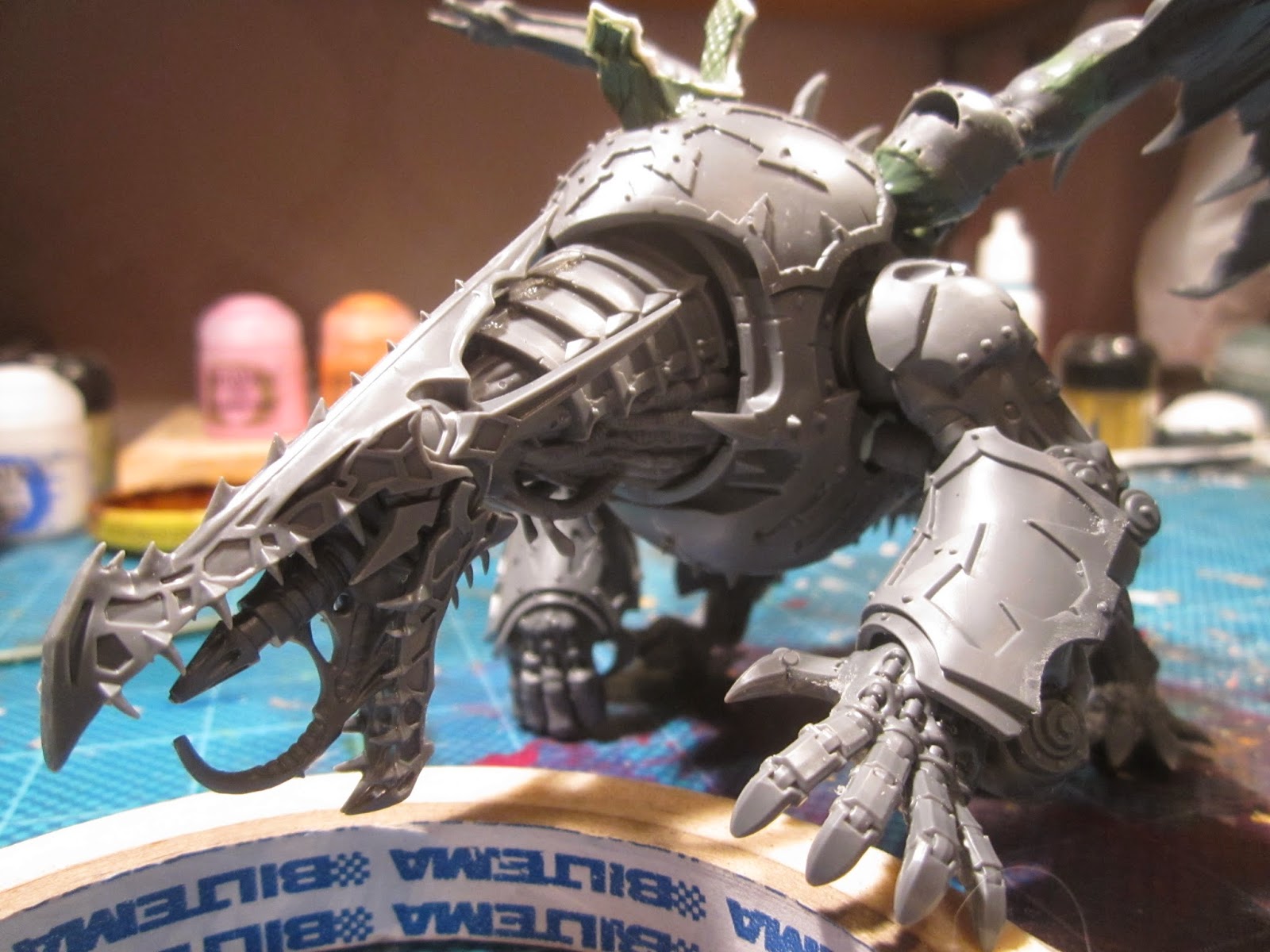 This is something that I have been working on on the side. As I have finished most of my Blood letters, Blood crushers etc at a way from home I decided that I needed a Boss to lead them. I couple of years ago I came across a Hell Drake build someone had done on the net, combining the Mauler Fiend with a Hell Drake kit. As I did not have a Complete Hell Drake kit lying around I decided to combine it with the Daemon prince instead and use what Hell drake parts I had for the build. In the end I think the Drake works. I am a bit out on the rider, I think I need to get medieval on his ass (bring out the file) to get him into a deeper seat, now he almost looks like he is flying. I still have one day to work on it before it goes to paint. 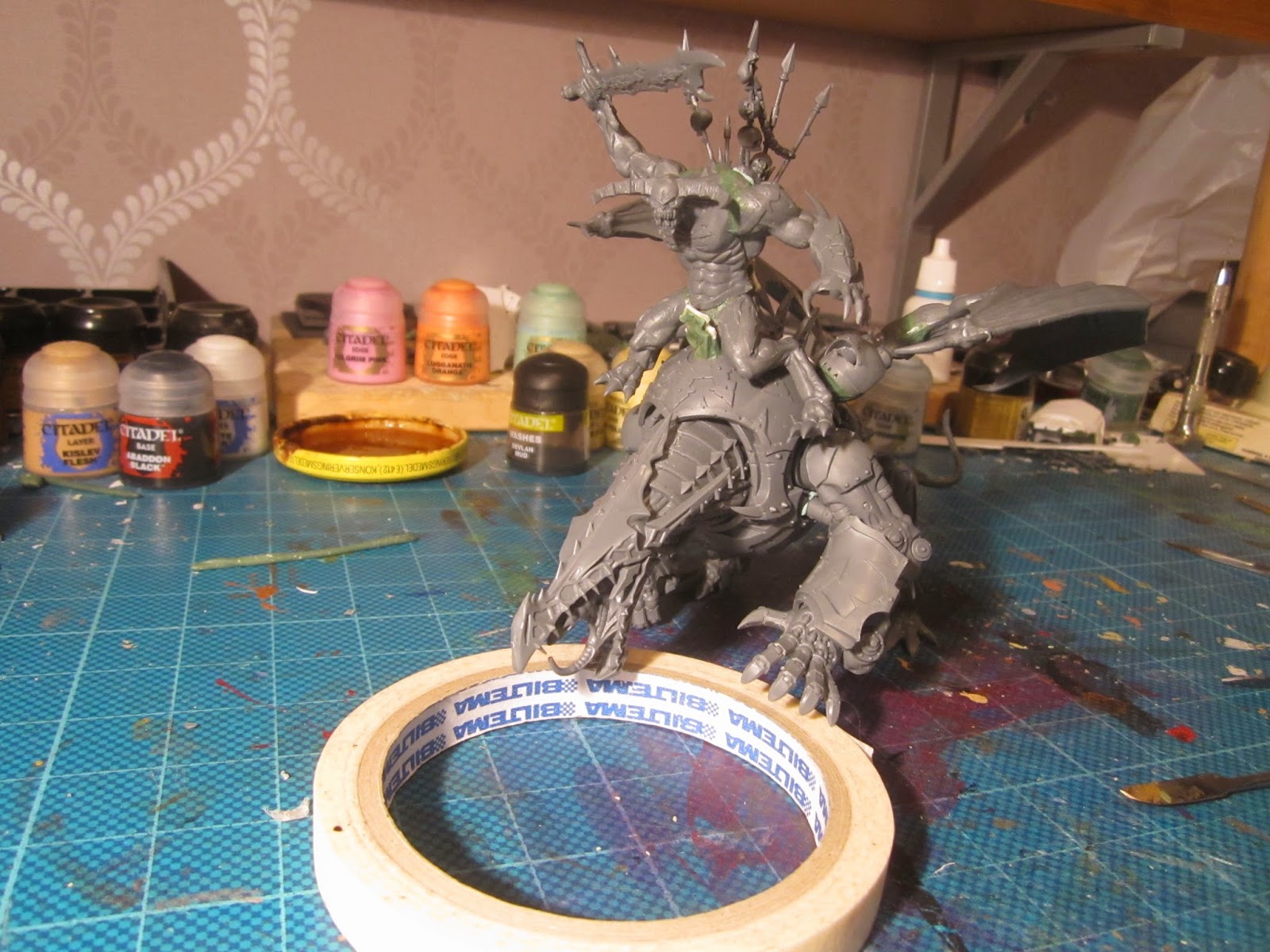 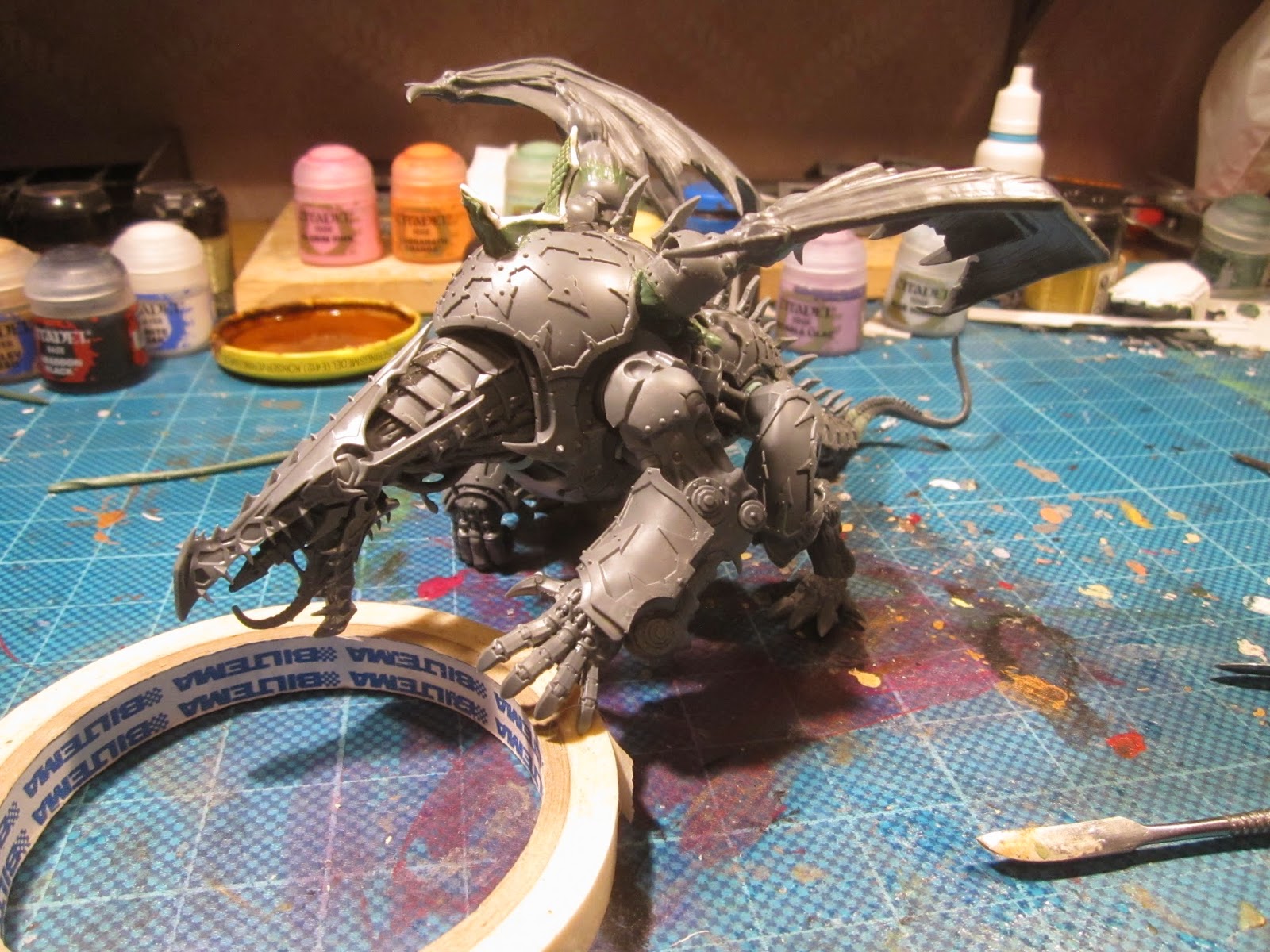 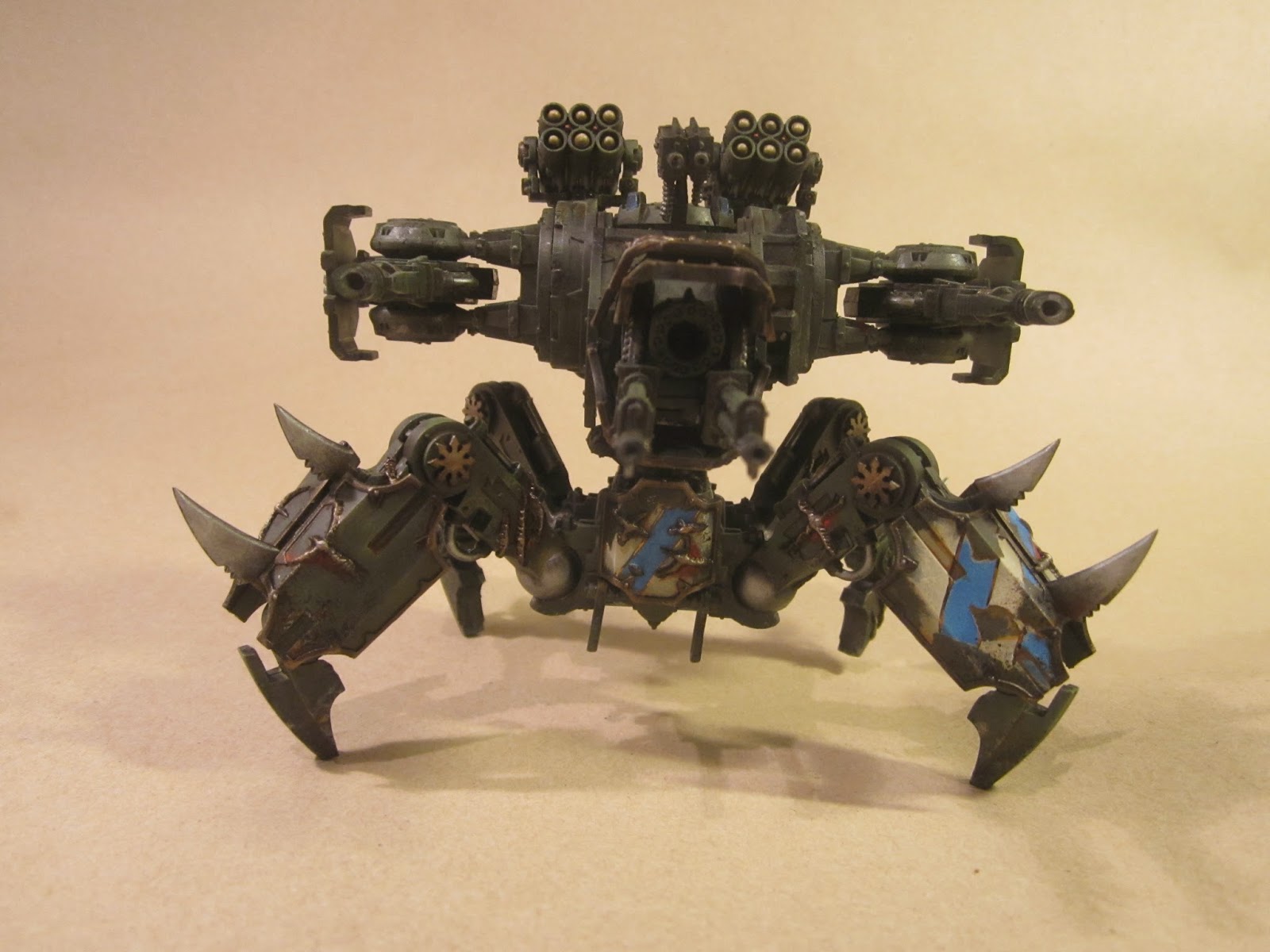 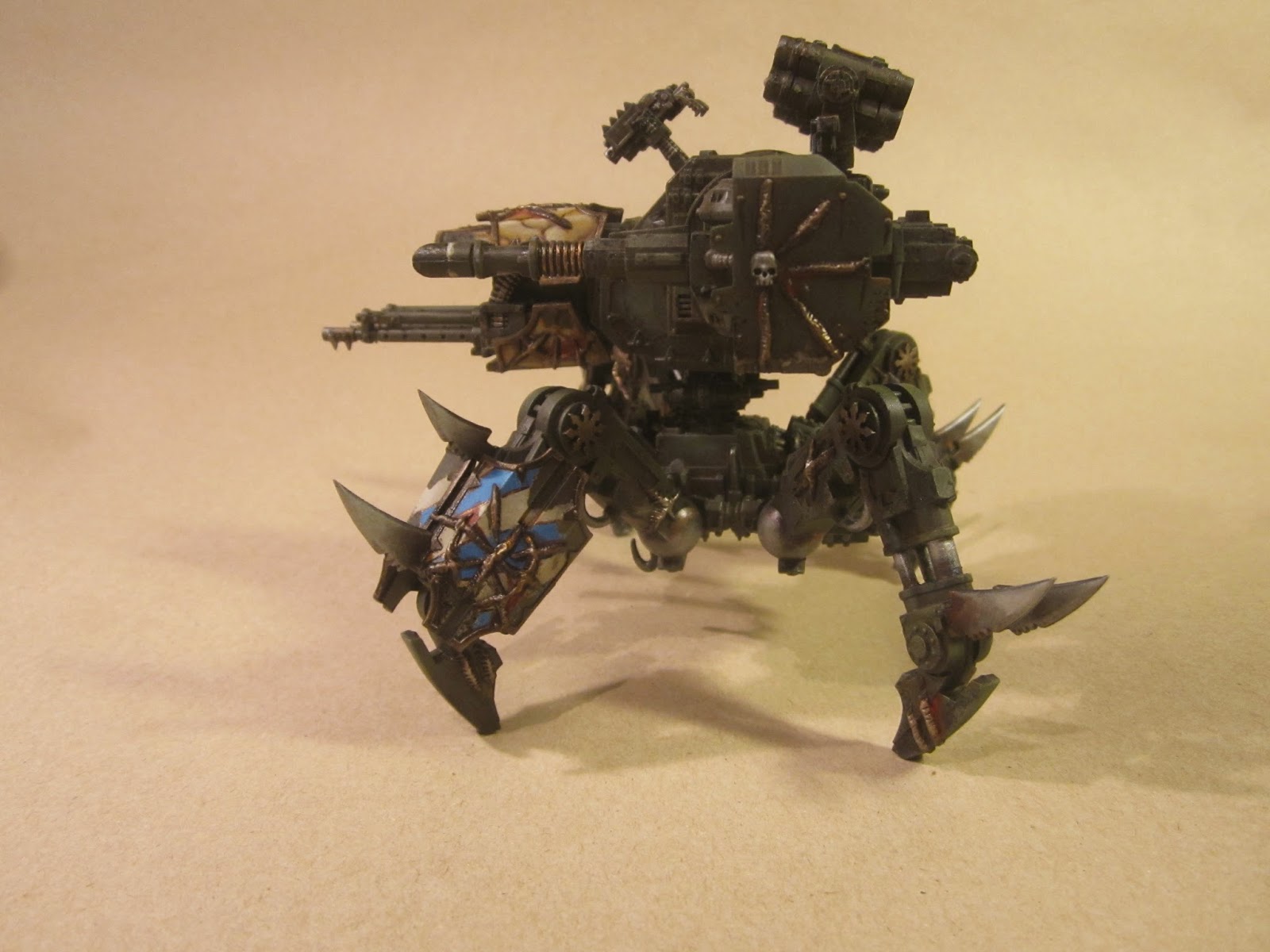 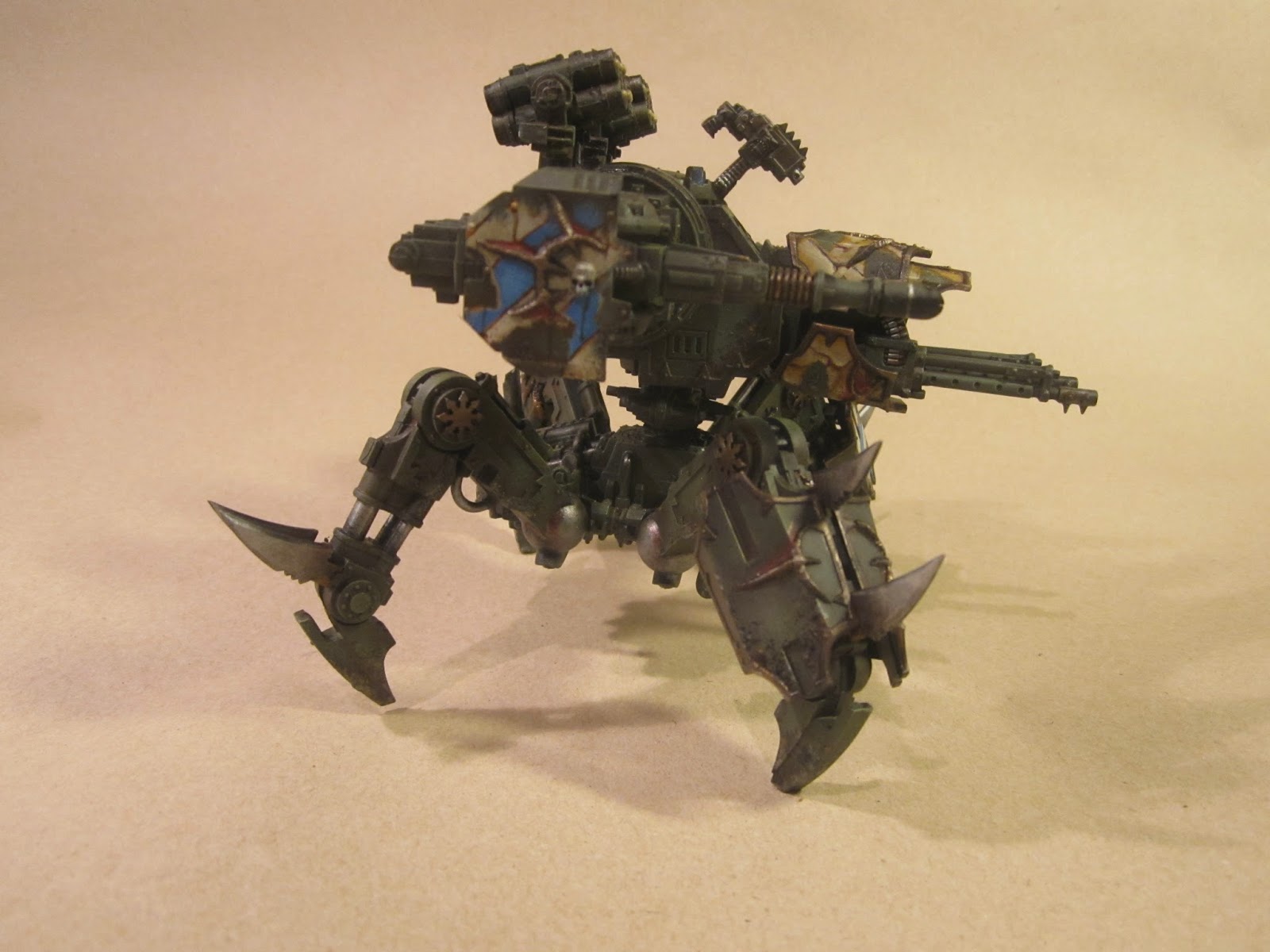 I have finished my second Myrmidon Walker. This one is equipped with two icaros las-cannons, a battle cannon, twin linked reaper auto cannons and two shoulder mounted missile launchers. I think it gives a nice contrast to the first Myrmidon Walker which has the dual quad linked auto cannons instead on the las-cannon and the shoulder weapons. They still have the same silhouette but they are still different enough to give the pair some individuality. Now I just need to finish the build of the super heavy Myrmidon with the quad lances, I am looking forward to that one as it is the main reason I build the Myrmidon Walkers in the first place. Hope you like my take on the Myrmidons. 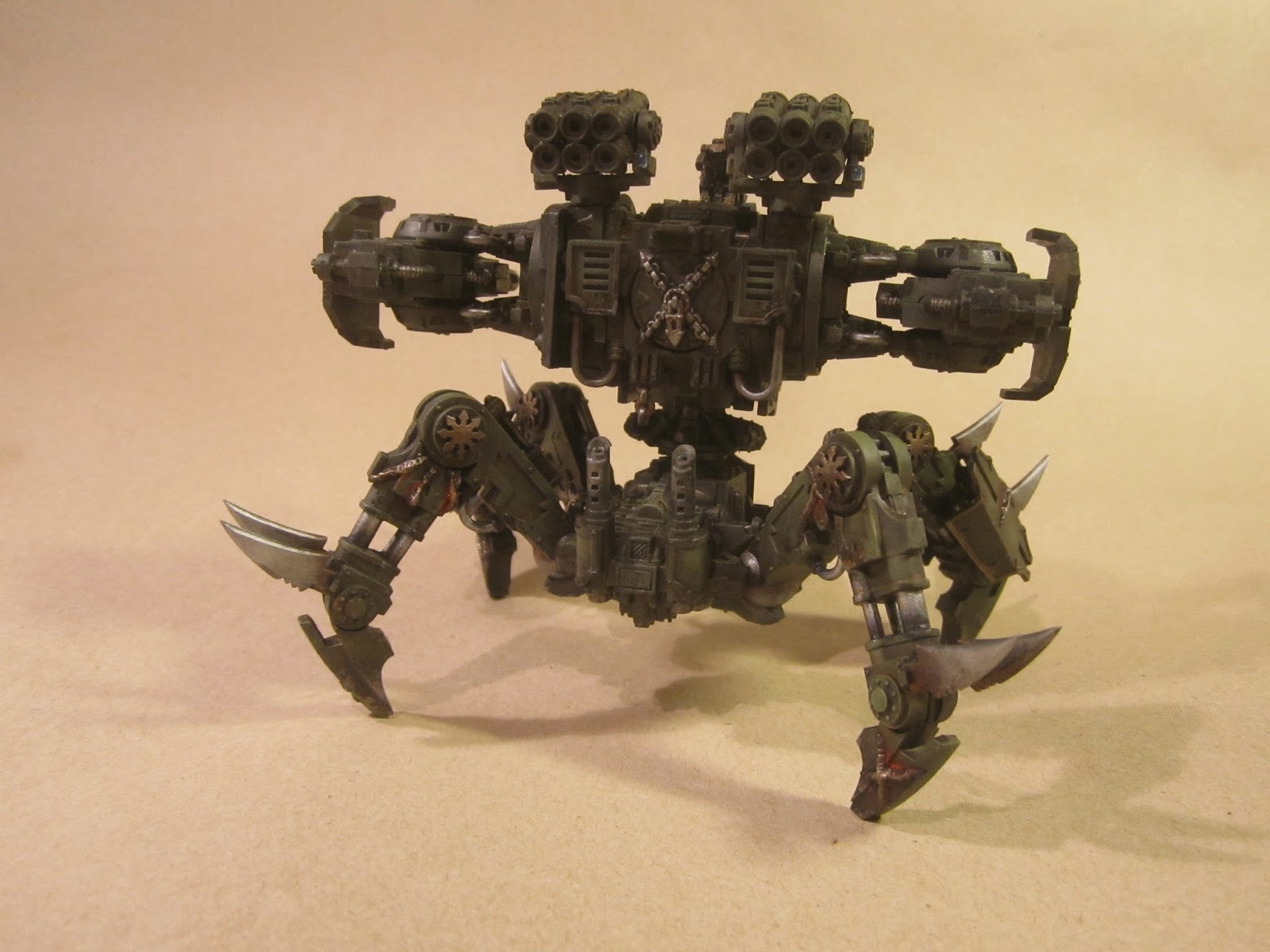 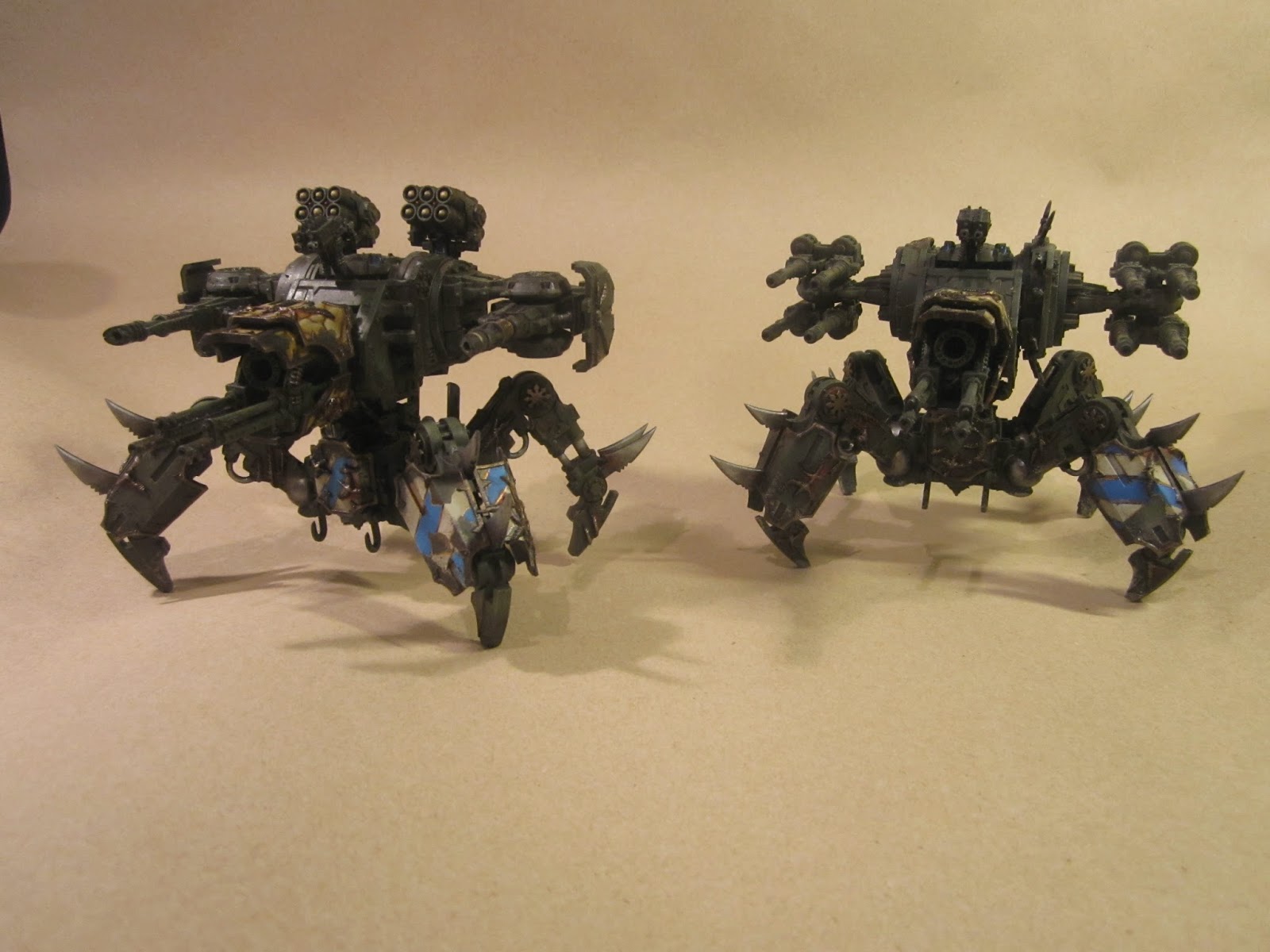 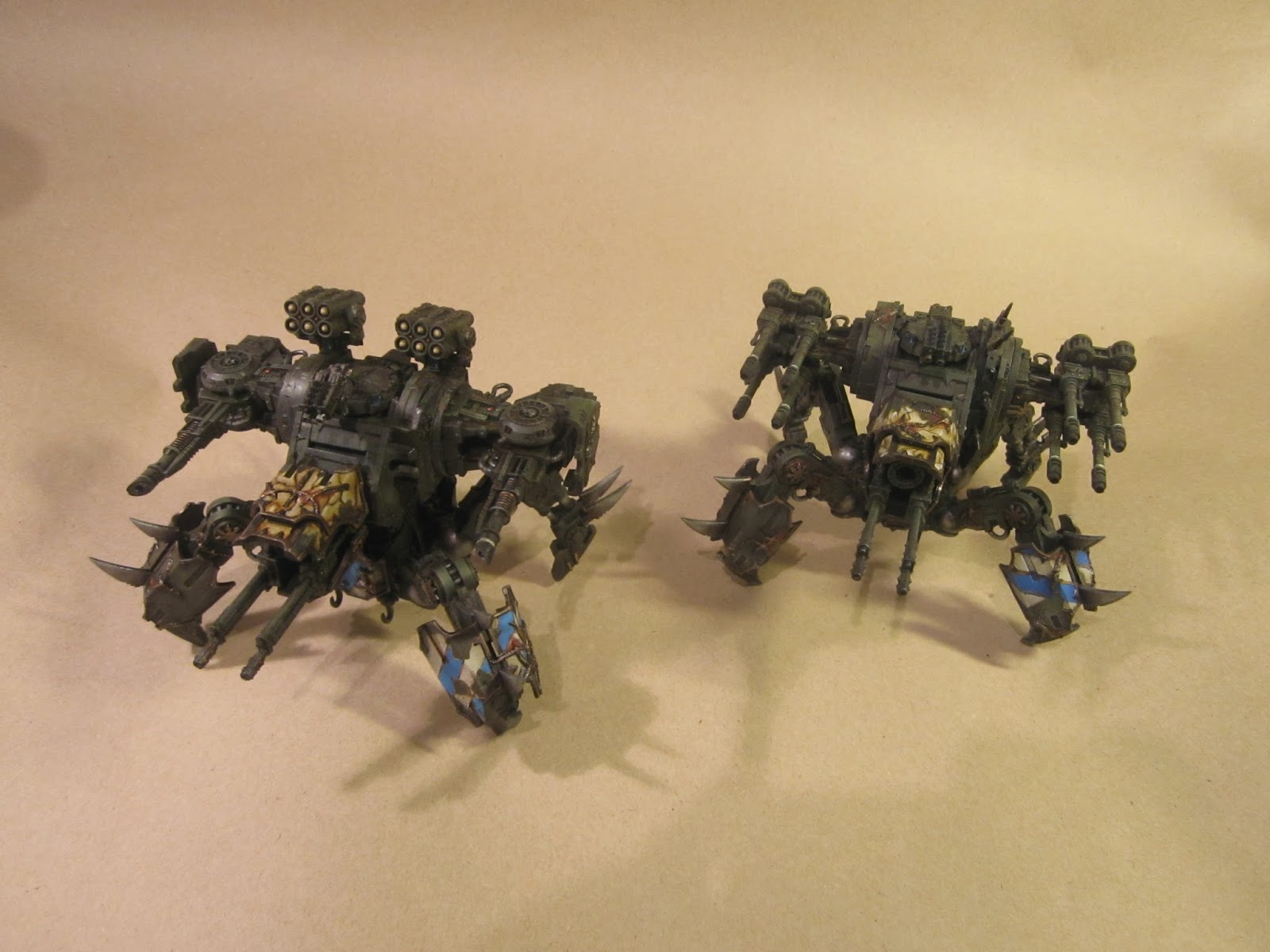