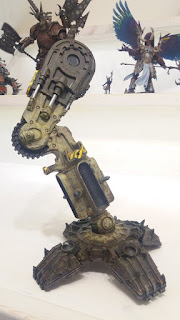 I finally managed to sit down for quite some time today and get some chipping, rust etc done on one of Varangian's legs. It is not done, I need to finish the metals, but then I can mount it to the base. I am however not sure about the chipping, it looks a bit messy in places, but there is so much to paint that it easy to speed up just to get it done and then it is not as crisp as it could be. All in all it is a learning process for me, and most of this will not be too visible in the end.
I like the contrast between the light and dark green, but the chipping and rust on the dark green is not as visible as on the light green. But this is certainly something I will carry over on to the rest of the model.

Once I finish this leg and the other leg I can glue the them together with the pelvis and cut all the pistons to length. Who knows, I might finish the legs to Christmas this year instead of last as I though then. I am seriously in over my head with this model. 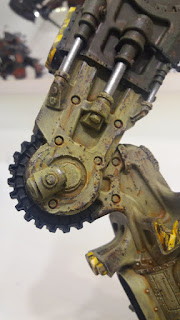 Since the last pictures of the Primaris Ultra Marines were a bit smeared and that I got a request for some better pictures I took some new ones. 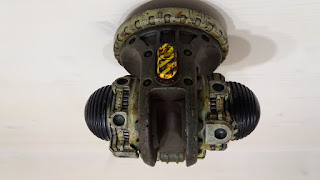 I have just finished (almost) painting the first piece of the Varangian exterior. For this piece I had to try out the weathering and shipping that I will use for the whole titan. As I was not sure how it would look, since I normally do this on smaller models, I started with the pelvis, as this will mostly be hidden any way. I have painted the shipping in several sessions trying some different techniques. The upper rim was the first and here I tried using brown and orange paints to actually paint some larger rusted areas. In the end I think it looks more like leopard spots than rust. The second part was the dark green areas were I tried to down play this a bit and add some streaking. It did not turnout as well as I hoped. So in the end, for the leg rings and the back I just did some light sponging and orange/rust lining. I think it looks better, not as cartoonish as the painted rust spots. I am still pretty happy with how it looks. There is so much detail on the model that I think less is more in this case.

Now I will give the legs the same treatment so that I can glue them together and pin them.

I am still around. Since last I have been doing some random work on some of my projects but have not felt any hobby mojo. I have tried to paint some primaries marines, worked on Varangian and finally done a Death guard.

The primaries marines were painted as Ultra marines to go with Gulliman. For these I tried a variation of the technique that I used for Magnus. As it has become more popular to do shiny metallic paint jobs, especially for the Thousand sons, I though I would try to make them less like smurfs and more gritty. To do this I did a metallic drybrush in four stages of the minis bringing them up to white metal. Then washed them with watered down regular paints, and a light dry brush. This was then topped of with yet another layer of metallic drybrushing. This gives the blues a more blue gray look and bright highlights when subjected to strong lights. In normal lighting they still look like blue marines.

For Varangian I finished the base paint of the legs and pelvis. Now I will start with chipping, weathering etc. This model is so huge that I have to break it sown into sub areas as I can not do every thing in one go. I have also worked a bit on the GS motifs on the shoulders. Here I am really taking it slow so that I do not rush it. It will have to grow as I am getting accustomed to the design and gradually adding detail until it feels right. I do not want to have to remove it and restart!

Finally I painted a Death gurad. With the release of Mortarion coming up I decided that I once again would try get the colors right for the Death gurad. A few years back I test painted a few "normal" chaos marines as death guards but did not really like the colors as they were to much towards the green. I am more into the white of the pre-heresy scheme. So this time I did a bone white base with some green (northern ghost green) detailing. Metals and hoses were done as "pure" rust with a bit of metal showing. The tentacles and fleshy parts were done as pale flesh. Over all I thing it looks much better than my earlier attempts so I think Mortarion will get the same treatment, but perhaps with a bit more color shades.

And I do apologize for the quality of the pictures. I think my battery was low and hence the flares and streaking.