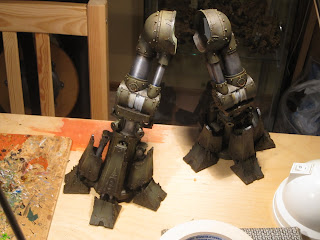 This week has been a combination of frustration and satisfaction. Half way through the week my brown ink ran out. This is the main base color for the titans on top of the green. So I went to my local hobby store to resupply...   but inks are no longer sold by GW. Instead they have something called a wash. Last week I bout a black wash as my current black ink is running low. According to the attendant that should be the same. But it is NOT. Luckily they also have the P3 paints so I bought a brown ink from them. I have not figured out what the wash is for but it is not as a replacement for inks. I have now tested both the new ink from P3 and the wash. And I must say that the wash was useless, at least for what I wanted to do with it. The P3 ink was more like what I am used to. So the main paint scheme of the titans are saved for the time being. But the black ink is also running out which is a  greater problem as they did not have a black P3 ink, I dont know if there is such an ink but if there isnt I am in serious trouble. 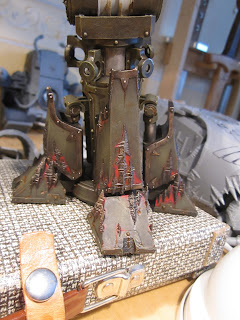 Well, apart from my paint troubles painting has gone well. I have now painted the Reavers legs and one foot, or actually both feet's are painted but only one has got the border work and red areas. I am quite satisfied with the idea, but I am not sure it comes across as a paint effect rather than some red lighting. I still have the other foot to do the same way, then it is on to the hip and pelvis. There is also some green stuff work to do on the armor plates. I managed to do a nice mechanicus emblem on the Reaver body, I might put a pic on that here later on. Once I get the legs attached to each other it is the second warhound that will get its legs done. Painting is going much faster than I though it would, which might be that I have had more time to put into this project than I usually put in to painting.
If I am good and paint a bit on my deamon prince (featured in a previous post) I might get to start on a defiler night also. This is a bit of a risk but as most of the construction work is done on the Titans I could do with a conversion project. =) well we will see about that later on.
Upplagd av Agis kl. 10:53 Inga kommentarer: 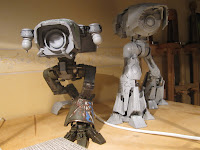 Its has once again been a while since the last update, which does not mean I have not been working on the titans. As I states in the last post I intended to bring the reaver, Joluns Wrath to more or the less same state as the war hounds. As can be seen to the left, It now stands by it self. I have magnetized the waist so that the torso can traverse. Putting the foot together was a pain, the pistons to the toes where a nightmare to cut to the right length and get them mounted, especially at the extreme position of the foot. I am pressing the envelop of what the feet and legs where meant to be able to do, but I think I can get it together. 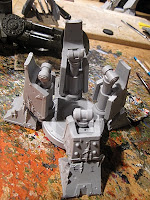 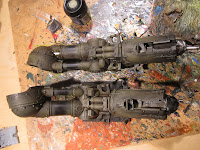 I have left the foot and the leg unattached at the moment. I have pinned them together for the time being. This lets me paint them separately but still assemble them temporarily. I started painting the legs which got the same green brown paint as the war hound. I opted not to paint the "hip balls" in metallic as on most reavers that I have seen. I am trying to keep the paint scheme as military as possible, which means that i try to avoid having to many base colors. 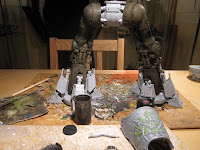 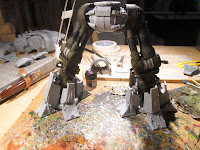 Hopefully they will not be to uniform at the end. It is a risk painting everything in the same color as it is easy to lose details and structure. But I hope they will look more like gigantic war machines rather than large colorful toys. I think I will have to get the armor plates and upper body of Unbearable Desire painted soon to see how it looks. I do not want to repaint all three titans if it does not work out. Still I am pleased with the results so far so I will keep going. 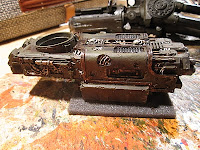 I could not stay away from the war hound so the mega bolter got some paint. It is still only base painted and it should receive some more attention with details. Now it is only the body left to paint, and the armor plaiting. I will probably spray it some time this week and start with the painting. I also have to try to find some more paint, I am starting to run out. I hope that I can still get hold of the right colors as the ones I am using now are quite old.
Upplagd av Agis kl. 09:13 2 kommentarer:

More plasma blast gun ...and something else. 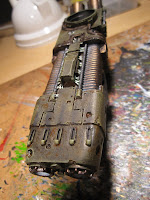 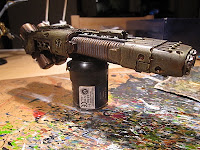 So I have painted some more on the plasma blast gun. I added the borders to the armor plating, the chaos growths etc.

It is basically finished, i.e all parts are painted but I have not done any free hand like numbers, warning signs etc.  This is something that I will come back to since it requires more concentration than I can muster at the moment. Right now I will stick to painting by numbers. =) 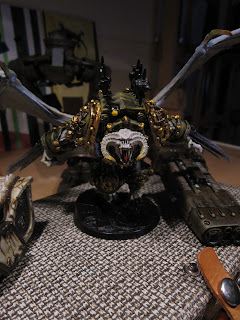 This is another project that I have been working on for some time...  5 years or so. It is still not done. I really dont like to paint chaos trophy racks and it has been kind of holding me back. If I get stuck with a detail that I dont feel comfortable painting I tend to stall the whole thing. Most of my painting is done as relaxation so if it upsets me, then it get put on the shelf. Well, eventually it will be a demon prince leading my chaos space marine army, or at least his own contingent of jungle chaos marines. The army is teamed around different mercenary bands lead by a champion. They are not necessarily attuned to specific chaos gods, it is more a way of getting to paint different schemes and still use them in the same army. Though I have to admit that there is one troop from each power... except nurgle. We will have to see what happens with this army. The titans are sort of demanding some ground support in the form of scitarii, defiler nights and perhaps a robot or two.
Upplagd av Agis kl. 14:14 4 kommentarer: 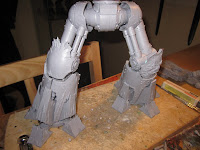 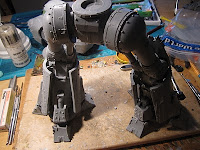 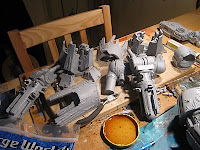 So, now I am almost at the same stage with the Reaver as I am with the Warhounds. The legs have been constructed, pinned and magnetized. The leg assembly can still be broken down for painting. The only things remaining are the toes and gluing the hip joints to the pelvis. This time I use super glue to attach the hip joints to the legs when dry fitting the stance, I have learned from the Warhound not to use blue tack for this... Hopefully they will break away easily once the joints are glued into the hip. Then it is only to start painting the inner leg structure. =)  I will hold off with the armor platings so that I can green stuff them in the same way as with the Warhound armor.

I could not stay away from Unbearable Desire so I started to paint the Plasma Blaster.It is not finished so I will put more pictures here later when it is done. At the moment only the green plates are painted and the inside of the barrels. 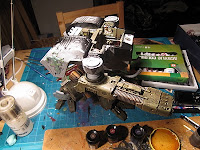 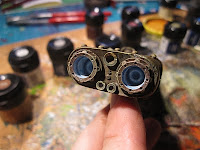