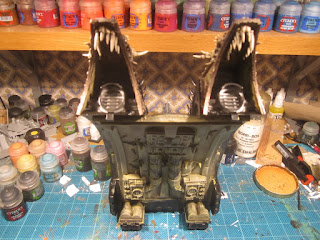 After spraying the back and the in-take cowls I could not wait, but started on the heads of the Void dragons. I needed to see how they turned out and if I should go on with the rest. I think they turned out ok, they are the first large scale sculpts I have done, and quite frankly, at lot of the design was improvised. There are some parts of the sculpts that didn't turn out as I wanted but it is what it is now, and I think they look great. It will be nice to see them together with there rest of the spine and the back. 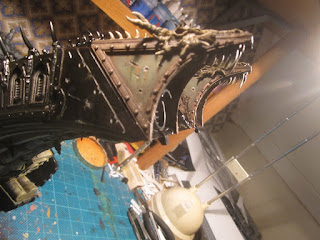 As for the back, I have already started the painting on the inside as it needs to get done before starting on the out side. It is taking time since the spike on the back means I can't put it down while I paint so my hand starts cramping. This means I can do to much before resting.
Well I am on my way to finishing of the body of Varangian.
and that feels great. 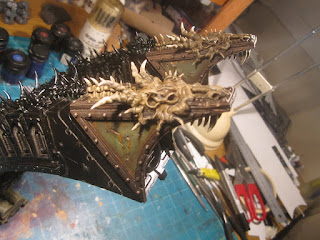 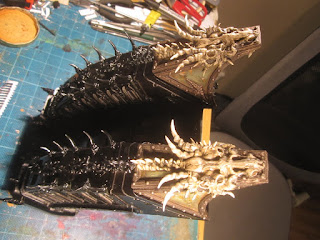 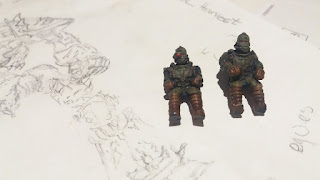 Did a quick paint job on the two green stuff pilots I cast using green and blue stuff. I am happy with the result considering it was my first tries and that they will most likely never be seen. I will be back with some WIP pics on the Hellverin later in the week. It is taking longer to paint than what I thought.
Upplagd av Agis kl. 12:15 1 kommentar: 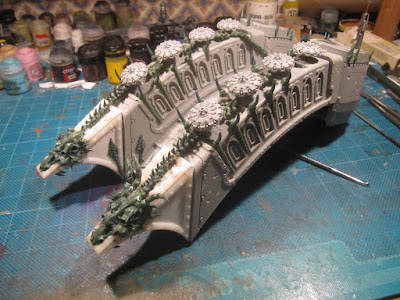 The internet has spoken! After the last post about the dragons on the cooling ridges I asked for some advice on the design and in the comments I got some good advice. Like my wife the internet did not like the rib cages, so I decided to remove them and go with my original idea instead (it had already been started). So instead of having ribs the cooling ridges now has some spiked bone ridges between the side vents. In the end I agree that this looks better than the rib cages. Once this dilemma was sorted I got the mojo going and have been working on the rest of the pieces. I sculpted some horns for the dragon skulls, added some small spike on the eye bow ridges. I also sculpted the last vertebra to connect the spine to the skulls. To fit the void shield projectors with the spine I had to raise them up a bit. So they are now more like umbrellas hovering above the spine. This means I need to do some sculpting on the under sides to tie them into the rest. I also need to add some more of the back bone to connect things. I also added some chaos growths to the main vent exhausts. This means I am almost ready with the back piece and can soon start painting. Once this is done the main body of the Varangian will be done so I am closing in on a major mile stone in this project. 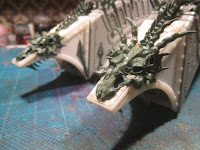 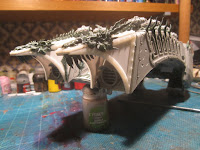 Apart from green stuff sculpting I have also been painting on one of my Hellverin Armigers. When I bought the Preceptor knight I finally got my hands on a "real" knight pilot. Since I am not bout to by a lot of knights just for the pilot I decided to try blue stuff casting some additional pilots as a test. I must say I am really impressed with the quality of the cast. I have tried press molding green stuff before from green stuff molds. But you can't leave the mold in place as the green stuff cures as you will not be able to remove it later on, and you also need some lubricant to release the green stuff from the mold, this has always lead to loss of detail and some warping. With bluff stuff you just let the green stuff cure in the mold and then you can just pop it out with very good results. I still have some problem with the amounts of GS needed to the cast so I get some unseemly mold lines, but they will not be visible once the pilot is in his/her seat. Since I have a good surplus of skiitari helmets I decided that they would work instead of trying to cast the real helmet. This process will save me much time in the future as I do not need to build the pilots from scratch any more (unless I want to off course), which will be good if I am to build a full super heavy detachment of armigers... (preceptor and 12 armigers). We will see if it gets that far... it is a hell of a lot of models to paint and build, but it would be cool as a scouting company for the rest of the knights and titans. 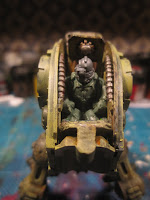 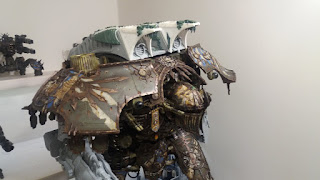 I have been working on some decorations for the cooling ridges of the Varangian. My initial thoughts were to have some rib like structures on the sides between the cooling vents. Then I came up with the idea of also having some sort of skull covering the intake cowls, which then off course led to the idea of having a full skeleton along the whole cooling ridge. But that also meant a ton more sculpting and I do not know if I am up to the challenge. Right now I am working on the skulls and some rib cages...  I already have spines going along the whole structure. I am not sure how much of the skeleton to actually make...  as it is now there will be skulls with a spine and some ribs. There is off course also the option to make some front and hind legs with the appropriate attachment points. My wife is however skeptical to the whole ribs idea and so and thinks it is enough with just the skulls... so I am a bit hesitant to put to much effort into this if it risks being scraped in the end. 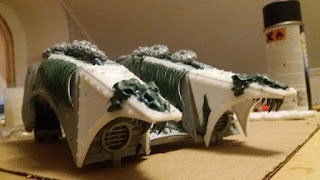 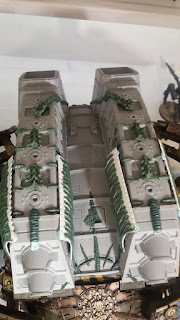 The sculpting is far from done yet, but just to give a view of what might be...
Upplagd av Agis kl. 12:44 3 kommentarer:

General WIP and an Exalted Sorcerer.

This week I have mostly finished some of the models I was working on when the Entropy project hit. First of I finished the Dark Angel terminator I was working at the time. I had also started a  I also finished a Vorax for my Mechanium army. Once this was done and I had settled some of the itching I had for working on the rusted up armor plates of Entropy I decided I would treat my self to a "character like" model, butterfly syndrome. So I picked up one of the exalted sorcerers I got from my wife I while a go that I had been saving for such an occasion. These models are crazy detailed, even if they are not true character models, and they are a joy to paint. Due to the very high level of detail I could work with a very simple color scheme as I the details will give the model all the depth and contrast it needs without having to many color fields. That being said I did choose to make the armor in the same way I did on Magnus and Ahriman, i.e. a silver metal with streaks of blue, violet, green and yellow. I think I managed to get the colors a bit better this time and I really like the effect. The rest was also done similar to Ahriman, purple robes and a color shifting white cloak.

I also decided that it was time to start with the arm weapons for Varangian. This is something I have been putting of, waiting for the back piece to be finished, but I am starting to realize that the amount of work I have to put in to the dragons is taking to much time. So I drilled out the barrel of the volcano cannon and added some magnets for the shields. For the fist I decided that I would magnetize the wrist so that I can rotate the hand later on to the right position. So I added two 10 mm magnets with a 4 mm central hole to the wrist pieces and a 4 mm M4 rod going through both magnets and being anchored in the elbow. This should make it solid enough not to drop off. I have also been thinking about the mega bolter and how to magnetize it. Both the back of the hand and the underside of the mega bolter is rather detailed so adding big magnets was out of the question. The two pieces are however extremely well molded to each other so the mega bolter is really well oriented and can not move in the plane of the hand two pair os small, 4.5 mm, magnets is enough to keep it from falling off. I put them on the armor trim and hope that the thicker metallic paints will keep the magnets covered. I still have not added all the parts to the bolter but so far it is sitting still. I could add another pair of magnets at a third position if it turns out it is not enough.

Well that is all for now...  I will add some small standard chaosifications to the volcano cannon and then I can start painting. The shields need some more advanced green stuffing so they will have to wait a bit. 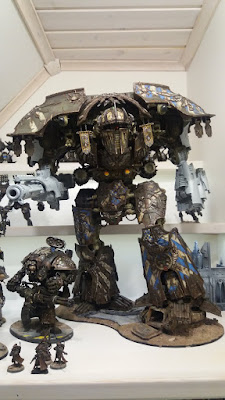