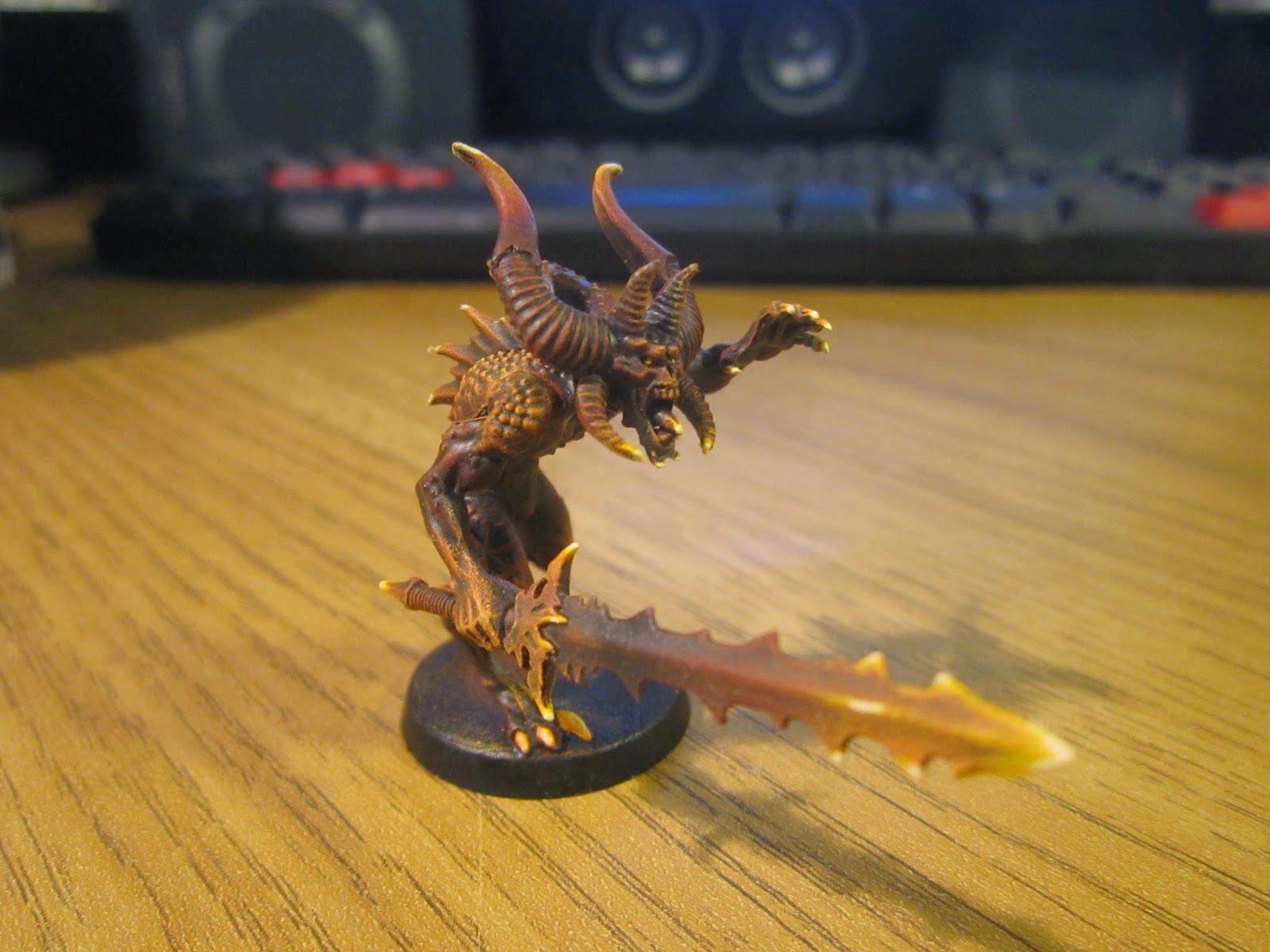 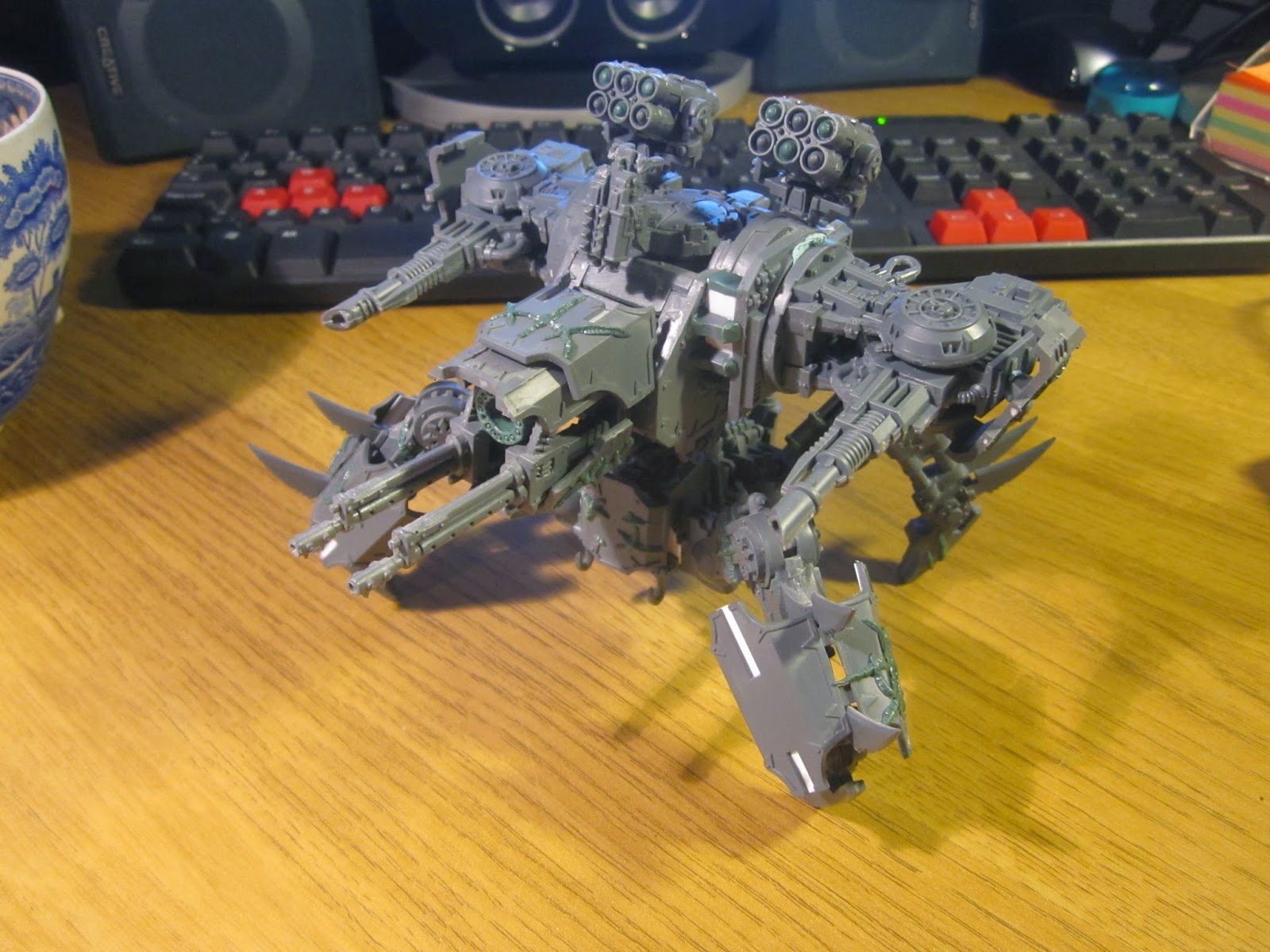 Once again I find myself making excuses for not blogging as often as I would like, but real life has a tendency to pile up on you If you don't deal with it. But all is not lost, away form home has really turned out to be a very good thing as I am getting through quite large ( for me at lest) quantities of models. In fact so much that most of the hobby time I have at home goes into building models for painting when I am away. This has also led to an ultimatum/strong suggestion from my wife that I paint less rank and file and more large models as we are quite literary running out of display area. The problem with that is I can keep from converting the large models to such an extent that I have problems finishing them, which leads to me painting more rank and file any way. So my time lately has been split between working, painting, building and securing the house for winter. The first and the last has sadly taken much more time than I would like but I have more or less finished a Myrmidon walker that has been hanging around my to do shelf for a couple of years. It was originally intended to be a twin to the one I painted awhile ago but Opus needed some of the guns for air defence so I ended up replacing the arm weapons to some las-cannons instead. I also threw on some missile racks on the back making it look heavier than the fist one. I quite like this look and will probably do something similar to the last super heavy one. 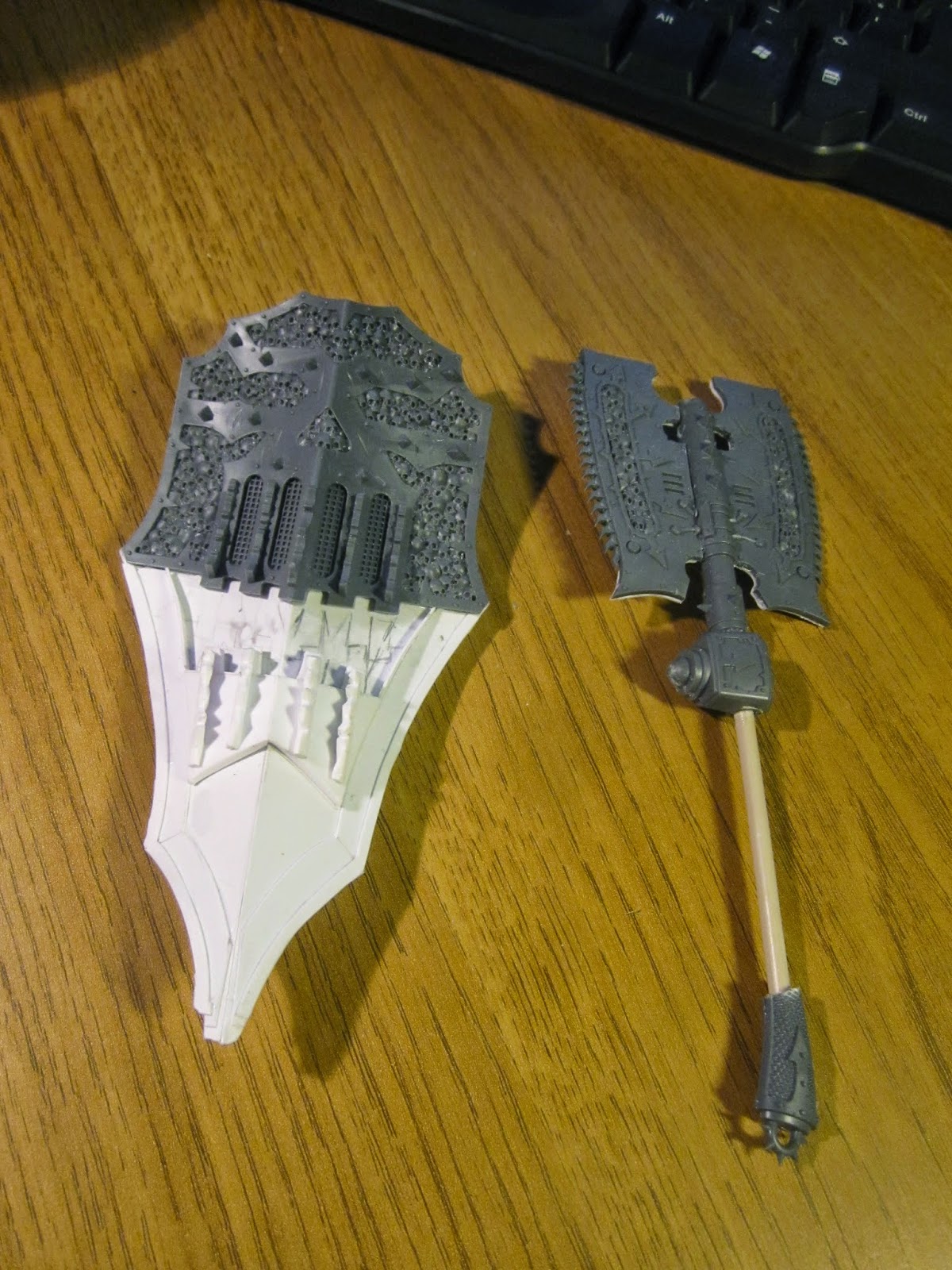 The I have also been working on the Hell Lord, mostly with the weapons and arms. It will be equipped with a large double bladed chain axe and a combat shield. The axe is made from the original axe where I used the two halves on each side of the shaft. This means I have to make some custom facings on the other side as it is only the inside of the original blade. I have some ideas but it is not done yet. The shield is made from the doser blade and a custom lower extension. I will try to match the look on the extension to the original parts by adding a lower yaw to the khorne mark/skull. It need some GS attention but I think it will look good in the end. 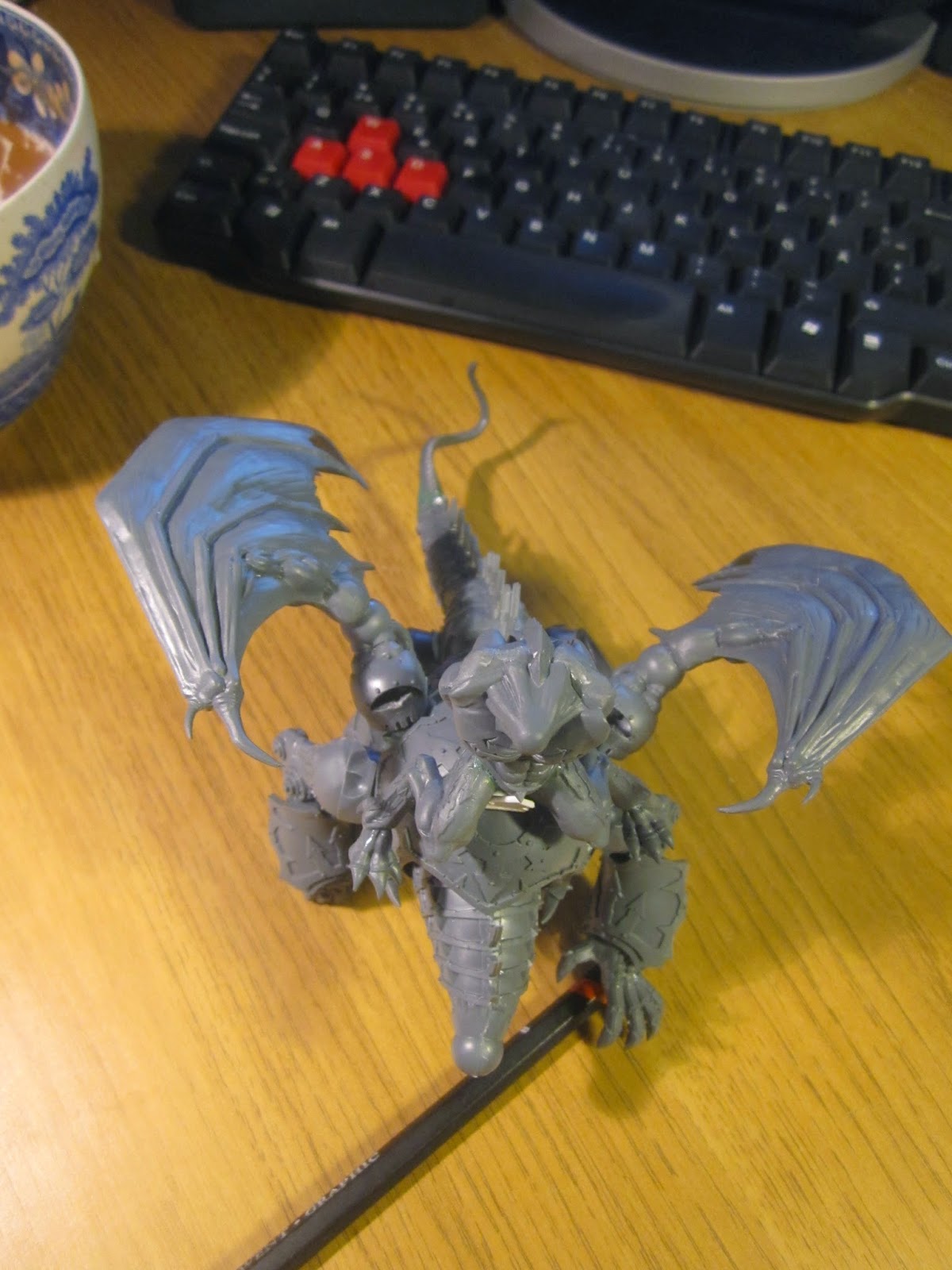 As I am running out of Blood letter and Blood crushers to paint I decided to head my wife's suggestion and build some thing large to paint away from home. I have had an idea for quite some time about putting a Daemon Prince on a Mauler fiend with a hell drake head. This should in principle be an easy build and I am hopping to finish it over the next week end so that I can bring it with me to away from home after that. It did however turn out to need quite alot of GS work so we will see if I can make it.

Well that is what I have been up-to lately....

P.S we are once again out of quota on the internet so there are not that many picture this time.
Upplagd av Agis kl. 11:59 Inga kommentarer: 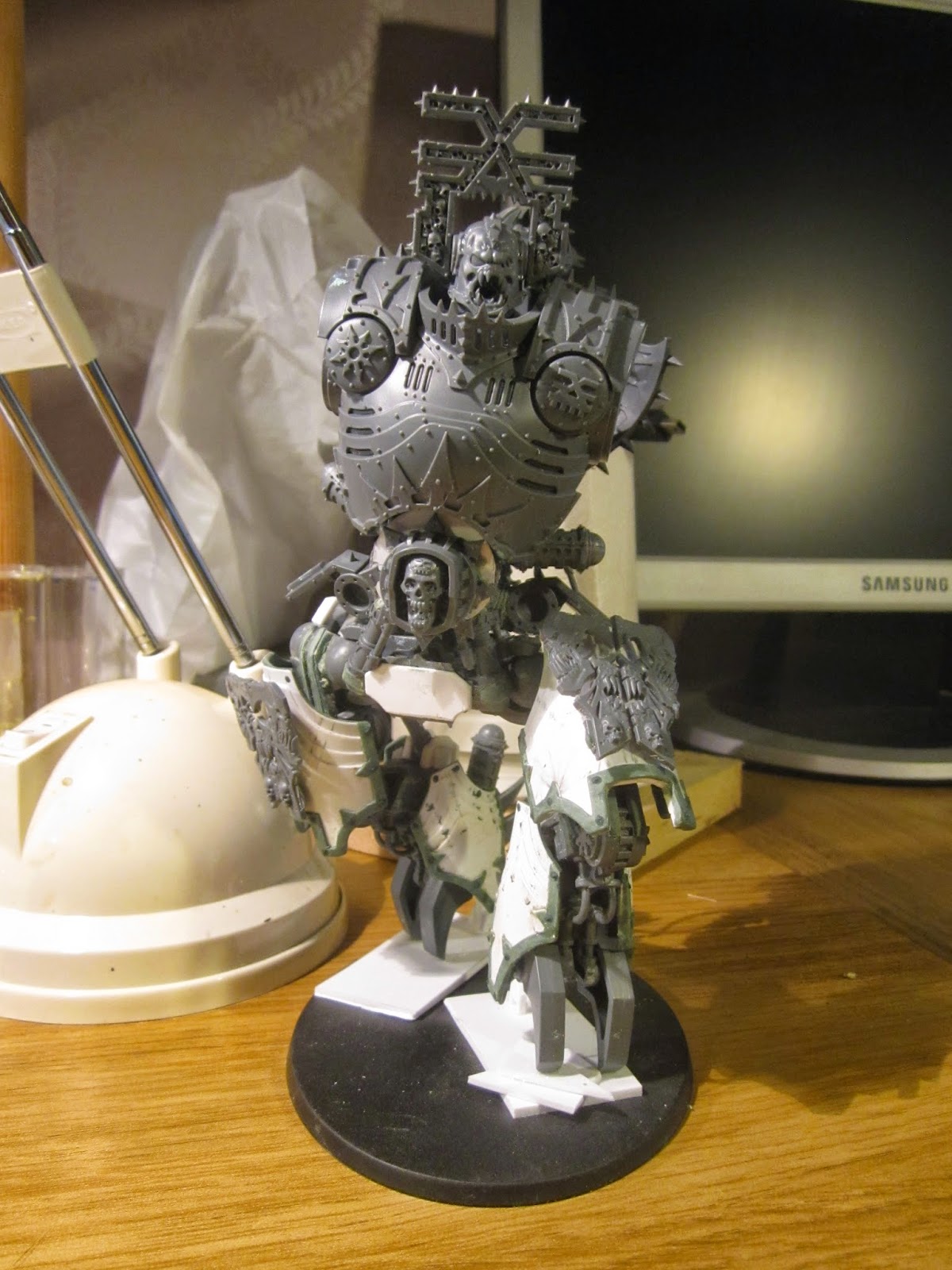 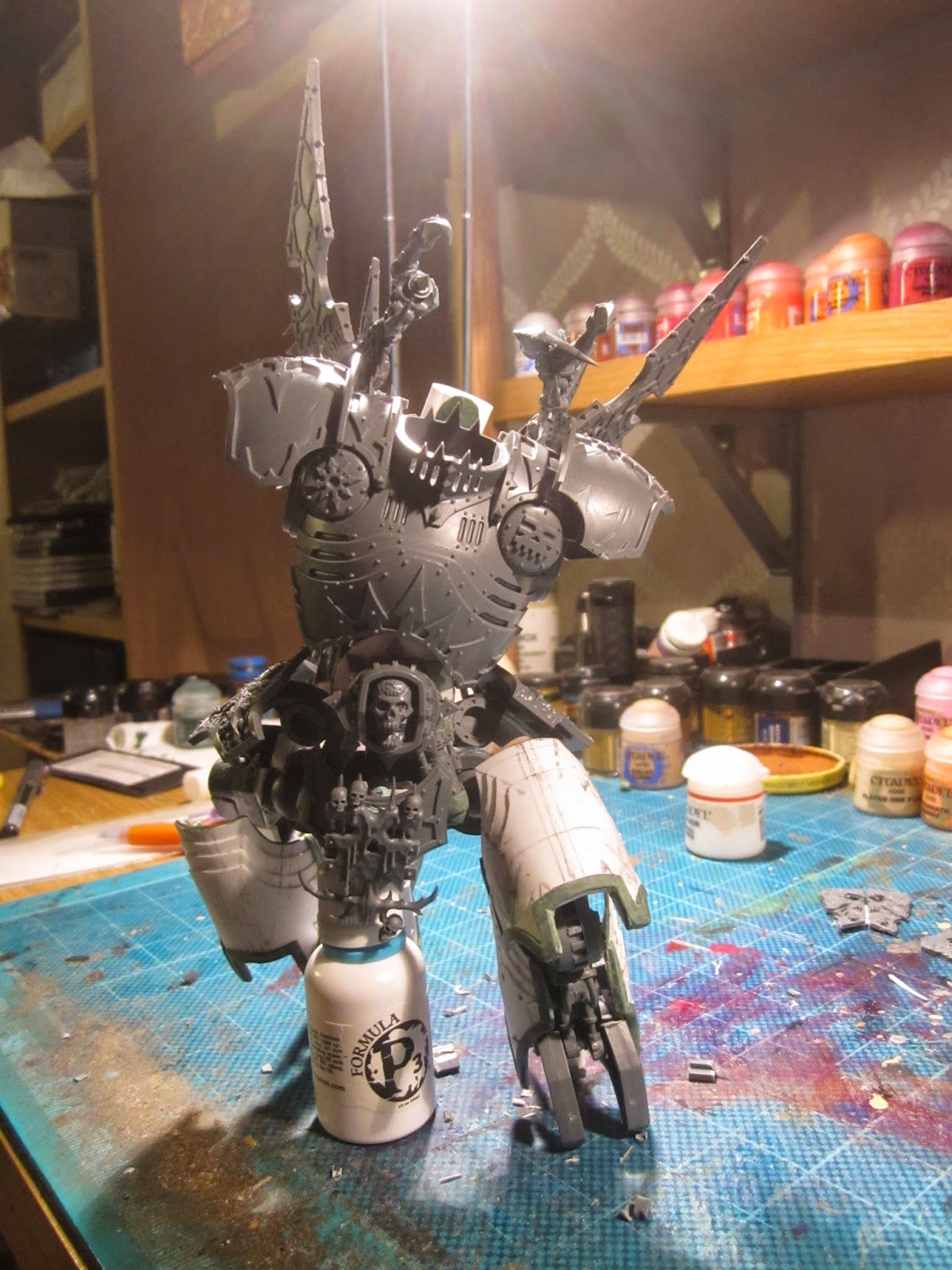 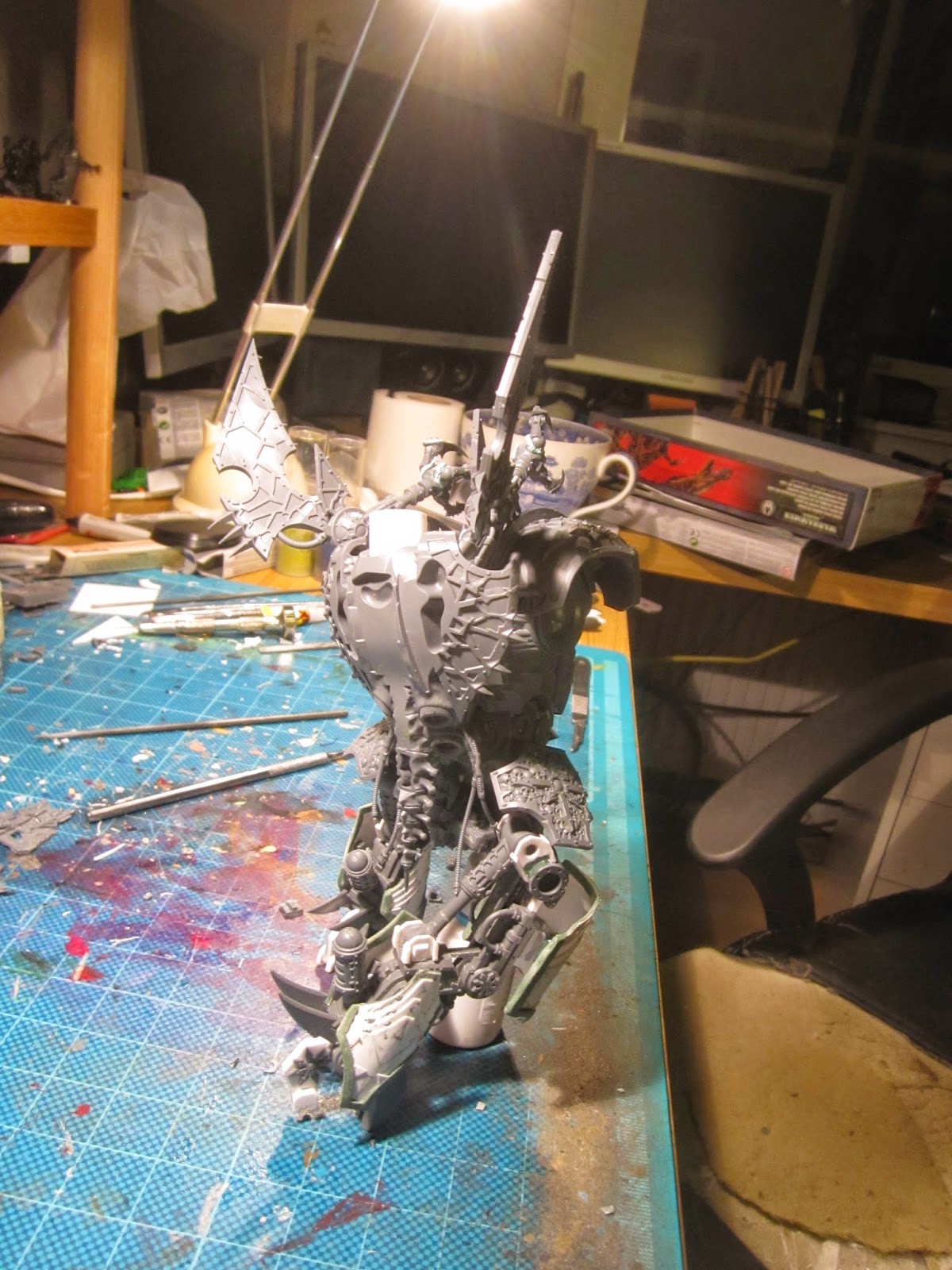 My mojo has been low lately when it comes to building. I cant seam to get enough inspiration to make huge progress with my large builds. Neither the Opus nor the Hell Lord has really moved forwards in months. As they are large and expensive projects I do not want to rush them and do some thing that I am not happy with. But I thought that I would at least give it a try. The problem with the Hell Lord has been the legs and the leg armour. As this is the heart of the conversion, putting the Lord Of Skulls on legs, I need to get them to look god. This is the third iteration of the leg armour and I think I am getting there. It it always hard to get an over all feel for hove the model will look when finished without assembling it. But once assembled the painting will be hard. The compromise is blue tack, but it is not very good at holding large heavy pieces together.  As seen in the pictures it will also have wings eventually. I have dry fitted them but never managed to get a blue tack assembly of the whole model with the wings. In the pictures only the small ones are on as the large wing blades keep falling off. Well this was just a short WIP to show what I am doing and that I have not disappeared.
Upplagd av Agis kl. 14:25 2 kommentarer: 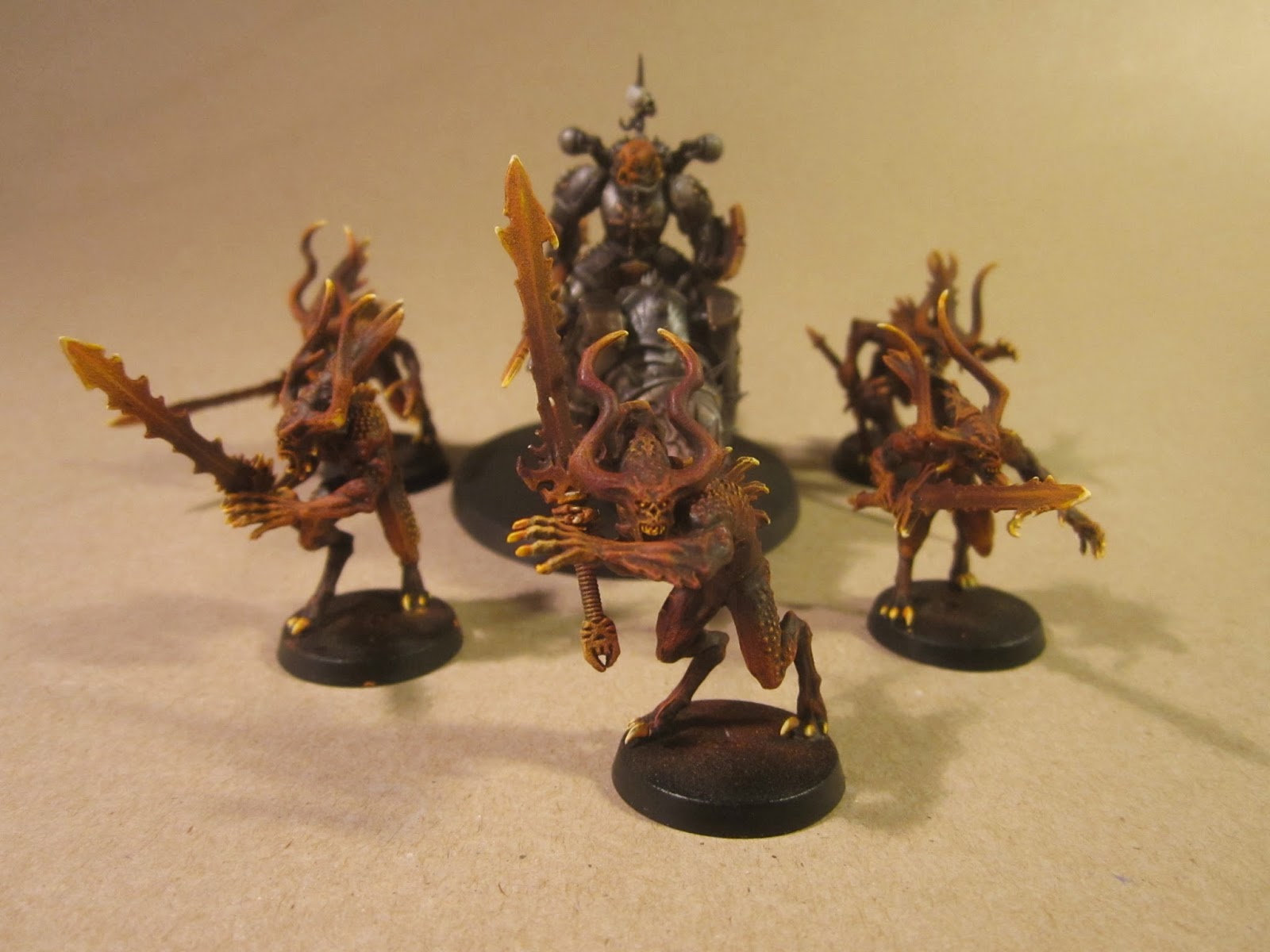 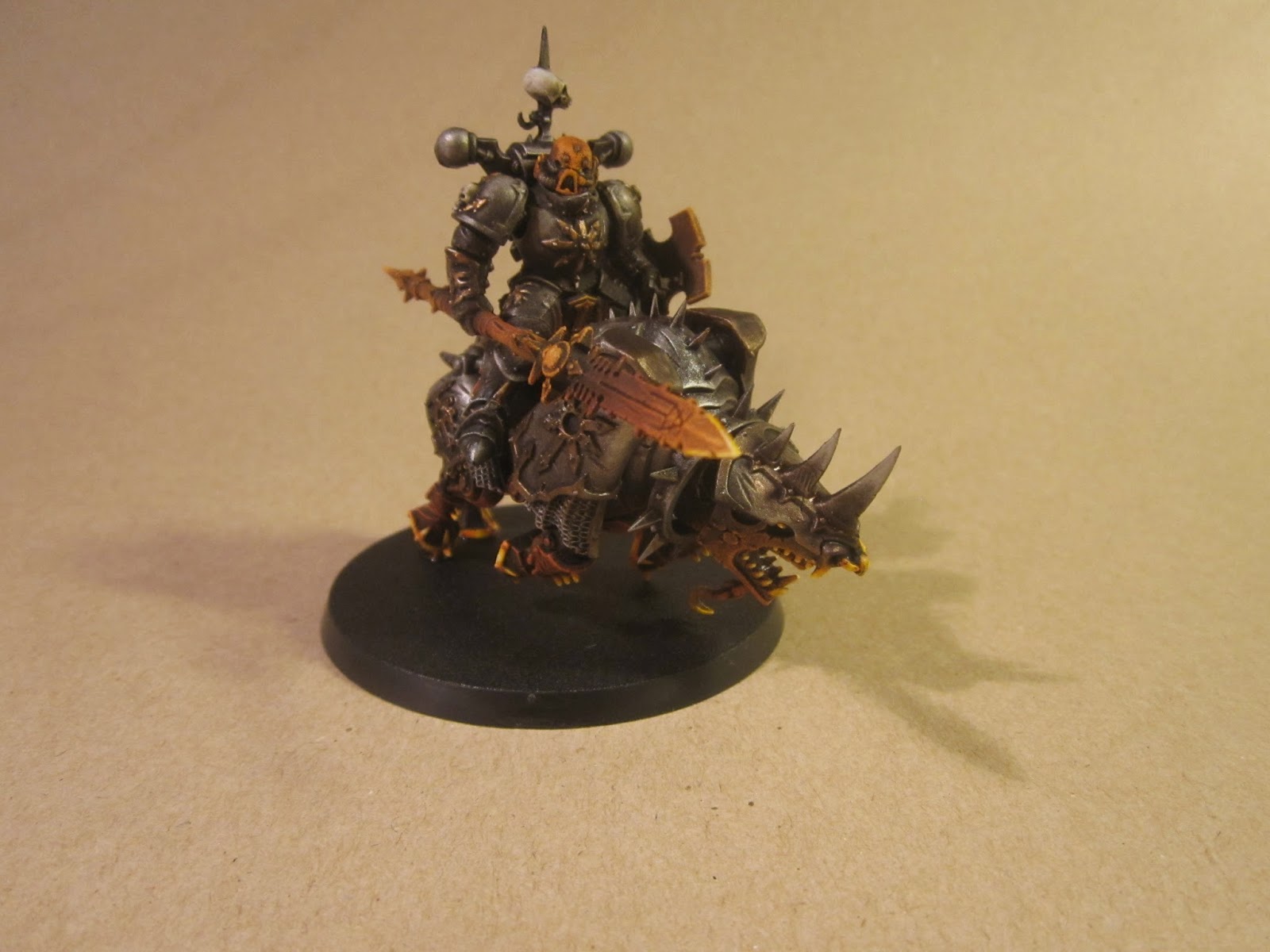 I am back home again and I brought all the parts for the blood letters and the juggernaut riders that I had painted. As I did not have any glue at the place away from home I had to assemble them at home instead. The quality is a bit uneven over the different models representing me getting used to the new work place and a new set of brushes and all the other little things that are used when painting. All in all I tuned out five blood letters and one juggernaut rider in seven evenings of painting witch is a much higher pace than I normally can mange. It is so high that my wife told me to get some larger models to paint instead of so many small models. She is worrying that we will run out of cabinet space, which is true. But I think that if that happens I have one or two shelves of very early models that I can put into storage to give way for new ones. 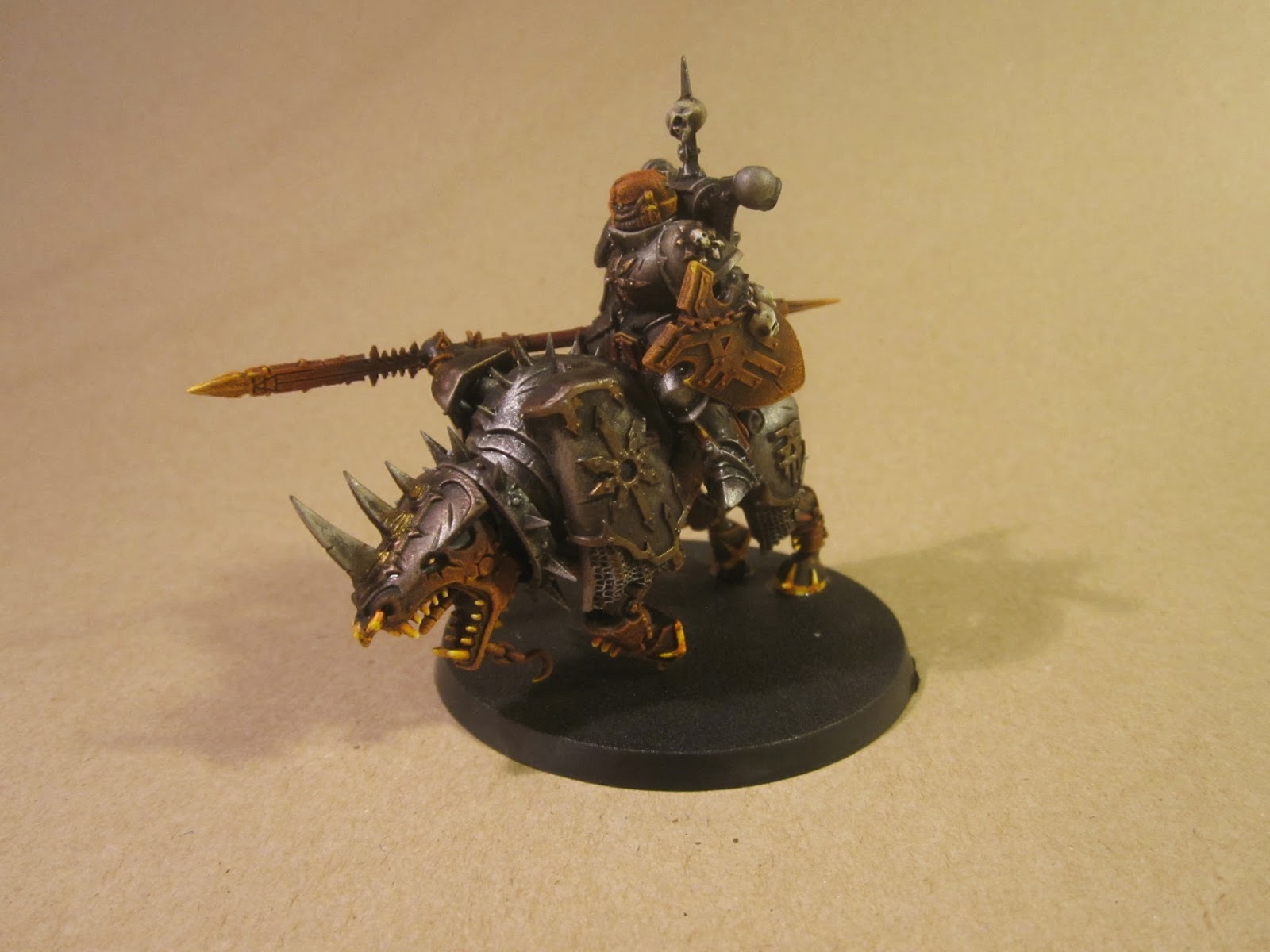 I am very pleased with how the marine on juggernaut turned out. It is to bad that it is only Lord hwo can have them. Also, the conversion is a bit to simple, new head and shoulders and a back pack stuck on to the back. I think that it would have been better with a real marine torso instead of the original one. But I did not want to put to much time into it since I was in a bit of a hurry when preparing the models. 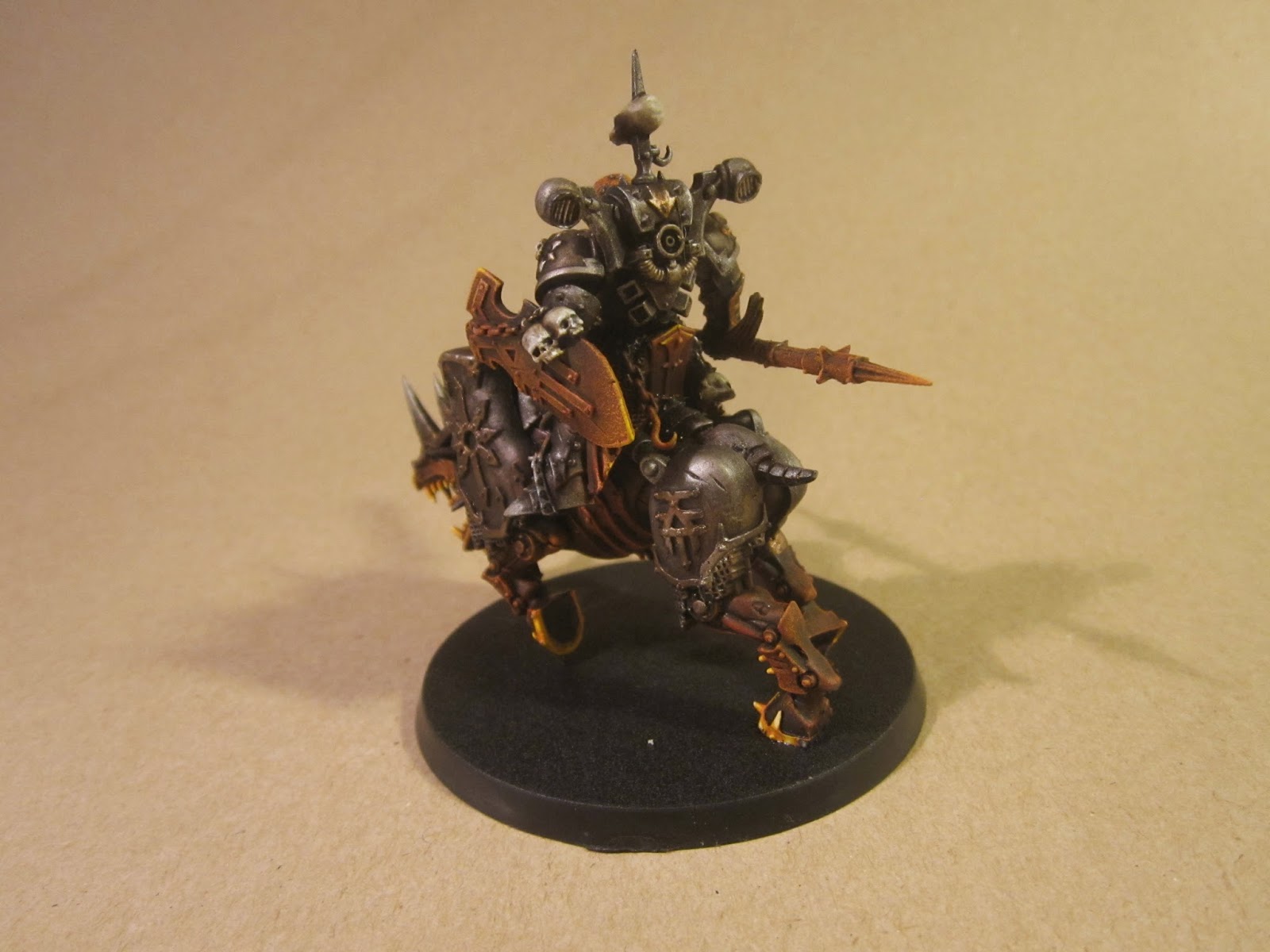 For the next trip I will probably prepare some more skittari/necorn, if I keep this up I might actually catchup on all the infantry models I have that aren't painted yet. I might also get a round to finishing of the last myrmidon/defilers I have had sitting on my to do shelf for close to four years now.
Upplagd av Agis kl. 13:12 Inga kommentarer: