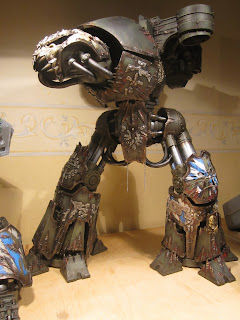 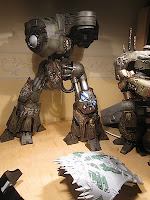 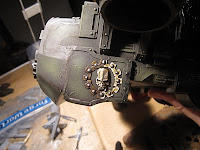 This week thing has been going fast. I started painting on Joluns Wrath upper body, I thought that it would take me some time to paint, but suddenly the front part was painted and soon the I had started out with the armor plating covering the head. Now one can see what it will look like when it is done. I have not really thought about it much, but once I saw this picture I realize that all the green stuff work that I have done, together with the painted patterns and all, it is really quite cluttered. Actually a little more than I aimed for but now it is what it is. But I am happy, it is looking good and I am looking forward to finishing it up. Speaking of finishing things up, there are currently only 7 major pieces and three minor pieces left to paint on all the titans. This means that I will have to start cleaning up and assembling the weapons for the remaining titans. 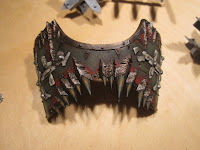 As I am moving forward with painting most of the the things are at this point standard since I have already figured out how to paint them. This might actually be the reason for the pace at the moment, it is just painting and no thinking. But once in a while I come across a feature that is unique, or atleast some thing that has not been painted so far, such as the teeth on the head and on the armor. On the titans I have seen these are painted in a bone/white color. Since I have the imperial remnants on the armor painted in a similar color I thought that I would try another color scheme. I ended up painting them a brown/black combo with the lighter areas at the base and black tips. I am not sure about this, they are quite dark and tend to be lost among all the other details of the titan. This might be good and it might be bad depending on whether I want them to pop or not. I will leav them as is for the moment, I can come back to them later on. 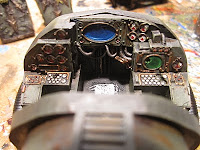 The Cockpit has also gotten a coat of paint, I am not satisfied with the look so I will go back and try to clan it it up a bit. The screens look too flat and the dials are too jolly. This is a chaos Reaver and not some nice imperial thingy. It might look better once the crew gets installed, they are looking suitably chaos. I have also done the last parts on Wolfish pervertions legs. The thigh plates got painted and attached. So now all the titans legs are painted which was part of my goal before the one year mark of this project. Now if I only can have the upper bodies painted as well it would be nice, but we will have to see about that. 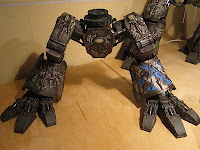 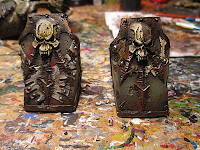 I is nice and a bit sad to see them growing up. It has been an intense journey over the last year but is has really gotten me into painting again. I will have to find a new project to work on after these bad boys have moved out onto the fields of battle. Talking about battles, my primary idea with these titans where the painting experience, but now I am thinking about actually finding me a apoc battle and let them lose. But to do this I need to find the rules for them and as far as I know there is not one book with the rules but several so I will have to try and find some information about what is needed to play them. Well, this is it for now, until next time then.
Upplagd av Agis kl. 11:39 Inga kommentarer: 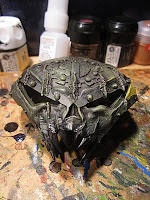 This week I have been working on Joluns wrath. I had promised my self that I could start painting the head of the Reaver once I got the last war-hound insides painted. So I sat out to paint it in a base green with the green struff modes painted as a broken bone mask covering the skull. I this is one of the pieces I have made the most extensive modifications to so I realy hope that is will trun out fine, otherwise I am in a bit of trouble as the Reaver will be the center piece of the army and the had is the focal point of the model.
So I started out with a green base. This was pained in the same way as the green canopy of the titan armor, green covered with brown ink, drybruched three shades of green and then inked again and drybruched again. This give me a feel for the 3D structure of the surface on the parts that will be painted later. 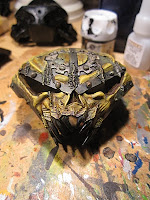 I have discovered that it is easier to get the shading right if I use a slightly watered down paint, covering the under lying drybrushed parts. In this way the drybrushed shades will shine through the new color. This helps later when I start painting on the highlights. In the pictures to the left you can see the process. The first picture show the green base color, In the second picture I have painted the bone in a light brown tone, washed it in dewlan mud and then highlighted it with the same brown color. In the following pictures I add lighter and lighter tones going towards bleached bone and with. I always paint these things with watered town colors, letting the underlying colors shine through and slowly building up the highlights.In the last skull picture I have reached the last highlight. I am stopping here at the moment, 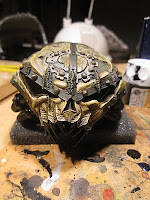 I am thinking about washing it again in dewlan again and then highlighting it again. But I will leave it for the moment and maybe I will do it later on. Well I think it turned out quite well. It is obvious that it is a sculpt and not the original but it is not to intrusive for the model. 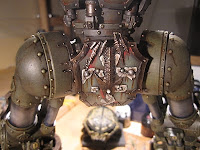 Apart from the skull I have also managed to paint the rear crotch plate. I will have to attach the cables going from this part to the legs. This I do not look forward to as it involves reshaping the resin and I have not figured out a god way of doing this. The position of the legs also makes it a bit hard go get them into place. I will forgo the cables to the weapons as I will have them exchangeable but these cables actually looks good so I will have to mount them. And as if this was not enough I also managed to paint the last two leg armor parts with wings. They turned out really nice. So now it is only the front crouch plate left on the legs and then they are base painted. 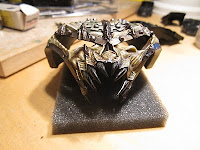 To keep up with the progress on the head I have also started to paint the main upper body. This is mostly large green surfaces and does not demand so much fine detail painting and should go quite quickly. I can feel the titans progressing and I can actually see the end of this project within the next couple of months. It is a strange feeling to not have a lot of titans pieces lying around and in stead have three large, mostly painted models standing around. Well there is still much to do on them but I am starting to get a feel for what they will look like. 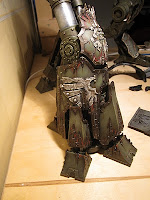 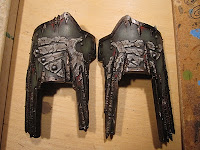 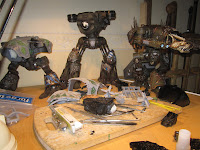 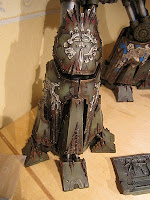 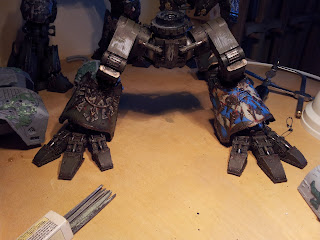 So, since last week I have painted the chin guards of Wolfish Perversion. I have also made some green stuff work to finish of some more armor plates for painting. These will be featured in later in another post. Since I was quite happy with the knee guard of Jolun´s Wrath where the demon face breaks through the loyalist patterns originally on the knee I thought I would try some thing similar with the demon face on the warhound leg armor. On Unbearable desire I just painted it in metal to match the boarders and the contrast with the imperial eagle underneath, so to make them a bit different on this Titan I thought I would make it breaking through the original leg markings. I decided to paint the whole armor piece in the blue white striped pattern in contrast to the half pattern on Unbearable Desire. This would mark the difference between the leader and the wing man in the pair and I think I will do the same with the back carapace later on.

Well, ideas some times sound better than what they are as they can be a bit hard to realize. This was the case this time. I am not sure it turned out as I wanted it but from some distance it is ok.

The other leg plate has the chaos star with a broken imperial aquila. This was a more straight forward paint job and it turned out looking good. The broken imperial insignia really give the titans some character and as long  as they are not to intrusive I think they add to the look. 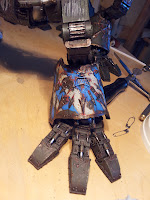 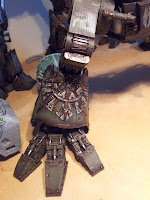 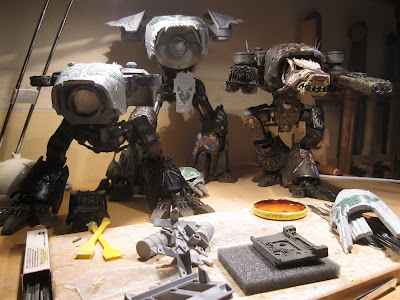 So I have finally gotten around to painting the armor plates of the remaining titans. The reason for not painting them sooner is because of the green stuff work I did on them. In principle they have been done for quite some time but after making the first patterns I was not sure if I would like to add some more later on. It is after all quite an expensive model and it is not like I will by another one just because I came up with some nice stuff to add. So they have been around for a while, waiting for me to come up with some thing. However nothing has come up so I figure that I am satisfied with them as they are. It is also a question of less is more and keeping it nice and simple. I am after all, not a professional sculptor. So on with the painting. I decided to use the striped pattern used on Wolfish Perversion also on the left armor plates of the Reavers legs. I used the same technique as I did on the warhound carapace and leg armor. I am quite happy with the appearance of the striped pattern pealing of.  I use a technique where I use masking tape to protect the under lying paint as I paint the patterns. This gives actually give a authentic edge between the layers of paint. Well, they are not completely done but they are looking good. I have also gotten all the Titan bodies assembled so that I can put them on top of the legs, so in less than a year I have the three titans up and standing and at least one of them is more or less painted while the other two have the legs painted but not the upper bodies. I though that it would take me longer to get this far. Now can actually see the end of this project. Now it is just to finish of the last green stuff work and get the rest painted.
On another point. I have thought about all the other Titans sold by forge world. Wouldn't it be nice to have an index with the name and number of the all Titans together with an image. I have found some titans in other WIPs where the number is known but there are very few that can be identified. Well, that is just a thought. 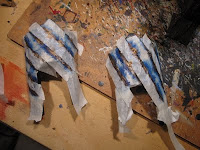 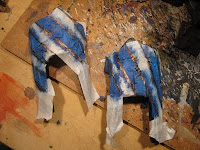 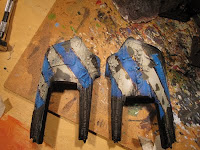 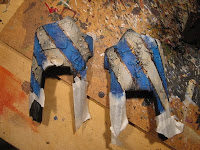 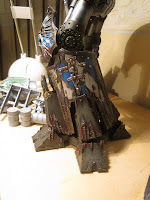 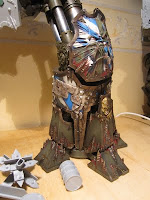