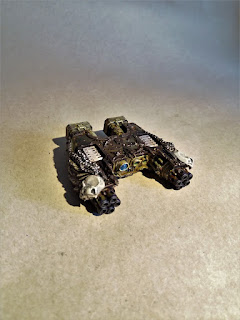 Quick update today. Finished the Vulgan Mega Bolter that goes on the Arioch Power Claw. I am not sure I am happy with the GS sculpts but it is what it is now. The skulls could have been better I think and the idea with the chains did not work as I imagined. Well you can't succeed every time and I will see it as a learning experience. 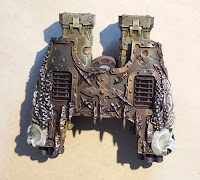 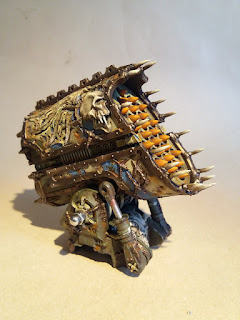 Over the last week I have manged to get quite a lot of painting time in and finished of the right shoulder missile launcher for the Varangian. I basically painted the same way as everything else on this titan. A base coat of yellow-green on the base structure and a brown green on the outer armor plates covered with a blue and white chevron that is peeling of. Add some bulled holes, rust pockets and a lot of weathering and it was mostly done. 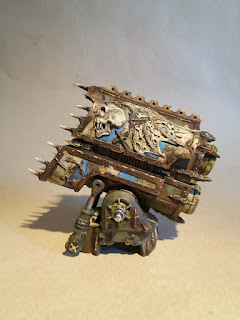 The winged bone skulls were painted the same bone as the other skeleton parts on the gun and intakes. The membranes between the "fingers" of the wings were painted in the same mottled way as I have done with the webbing on the insides. The missiles were painted a rust brown-orange to give the some more contrast over just doing them white. I also for go to make any stripes or nose tips on them, representing the lack of maintenance, or the lack of initiative to do anything to the missile bodies. 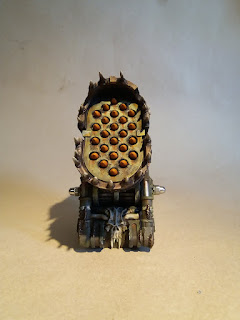 All in all I am happy. I am getting better at GS sculpting. It is still not on a professional scale but it fills it purpose on this model. Now I only have the left shoulder laser to do and some shields. The, finally it is time for the crew (the cockpit was painted before without the crew members).
Upplagd av Agis kl. 12:06 2 kommentarer:

Wrapping up some lose ends on Varangian 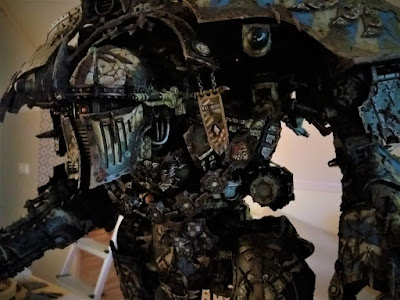 I finally got some time to wrap some things up for Varangian. I have had some small parts sitting around for a long time that "just needed" some paint. Well, as I now can start to see the end of my work with Varangian as a whole I though it was time to finish these so that I did not end up with a lot of minor things to finish once the big parts are there (I still have some small stuff to do on one of my warhounds that I sort of not got around to finish). 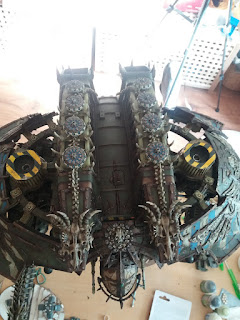 First up was the void shield generators. As I had to add some extensions to the forward couple I decided to sculpt some bony organic things with spikes to go with the void dragon spines sculpted on to the cooling ridges. I also planed to do them in a full bone scheme but once I got the base in I realized that I needed to break them up with some darker areas. So I whent for a bronze centre surrounded by a "bone rim". I thought about doing my usual weathering to the bone but decided to let it be for the moment. Then I added some electric blue to the core representing the energy going into the void fields. I useally do not add glowing effects to my models as I would not be to smart to have big glowy things on your war machines that makes them easy targets (might also be that I am not to familiar with osl techniques). I also do not know what material it would have to be to contain energy and still be transparent. In the end I think it worked out ok, perhaps not as I imagined but still ok. 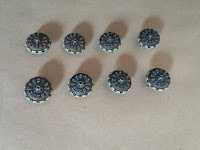 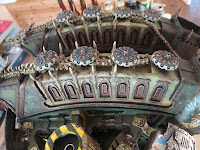 Second thing to tackle was the mauler bolt cannons. I had an idea of building a magazine for these as I do not see how they are feed. But then I sort of did not feel to comfy with what I built so I decided to just do them as intended by the sculptors and not worry to much about how things work. I painted them in my yellow green base color, weathered them and gave the barrels some heat staining but nothing. It is a simple enough scheme that does not add to much clutter. 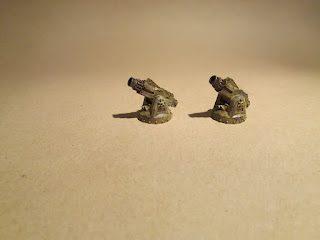 The third item on my to do list was the neck chain. I had already done the one mounted to the left leg and I sort of had a wage feeling of unease about painting it so I have not been to keen to do the second one. But if it is not done now Varangian might be walking around with a backed out chain forever and we cant have that so I just had to bite the bullet and get painting. Once started it was not so bad as I remembered. Might have been that I used slightly different colors and that it gave me some better control of what I was actually doing. The base of the chain was painted as some rusted steel ingots with some gold and silver emblems. As it is the neck chain I also opted for some added bling in the form or green stones in place of the iron rivets on the mechanicum cog. The shields on the leg chain was painted with Varangians heraldry and I thought that I was just going to the same on this one. But then I got the idea to add the Titan owners club heraldry on one side instead as an homage.

Last on my list of little projects were to finish the pistons and cables for the arioch power claw. These items had been forgotten when I primed the claw and have just been lying around. Once painted I attached them to the claw. I might have to blend them in a little better though but then again, the claw is now attached so I might just forget it. 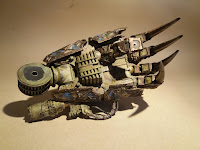 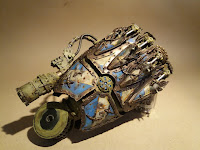 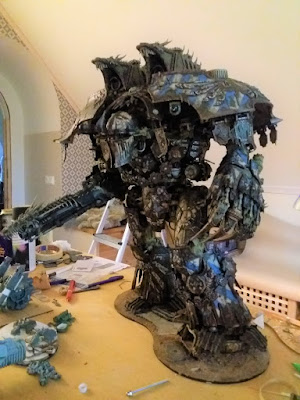