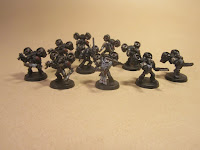 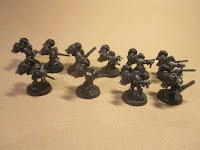 Recently me and the mrs played our first wh40k battle in many years, pitching my pre-heresy Dark Angels against her sisters (with some post heresy DA stand ins). One thing I suffered in this battle was the curse of wobbly bases. My assault squad with jump-packs kept falling over all the time as the resin jump-packs make them top heavy and un-centred. As the betrayal at calth, and I suppose all new marines are on 32mm bases I decided to change the bases and also take the opportunity to try out some more shoulder patterns. removing the old bases without damaging the models turned out to be a pain as I used polystyrene cement when i glued them in in the first place. Well some careful cutting with a scalpel solved that. I am not sure if I should make the same patterns on all shoulders within a squad or if I should give each marine his own heraldry. I think the individuality might be hard to keep up over some 50+ figures but it makes it more interesting to paint, and it also goes more with their back-story of the knightly orders.


Well we will see...    next up is some more mechanicum things. I am almost done with my second castelax so I hope to have some pics of it soon.
Upplagd av Agis kl. 13:59 1 kommentar: 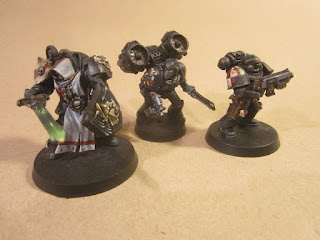 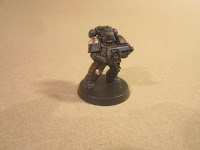 Well, I have not done much with the knights lately as work and other things has taken much of my time. Instead I went back to some of my fallen/pre-heresy Dark angels and had a look at the colour scheme. I have already painted most of the Dark Vengeance box as pre-heresy or fallen dark angels, they are however snap fits and the wrong armour but I have also started to paint some knights with sword and shield and now that I have the betrayal at Calth box with mark IV armour I thought that I might actually do some real legion/30k variants. I test painted one tactical marine ha few week ago and added some black and white checkers, red stripes etc to give them something that set them apart from any other black armoured legion. However, as time passed I thought that it more and more started to look like a Goff space marine with the checkers and so. As I am quite pleased with the Dark Angels knights I thought I would change the tactical marine to fit the scheme, which included some bone white fields with red detail. I also went back to one of the assault marines and added the same touches of bone white and red to tie them into a common and distinct theme. I think it works and it also ties in to the medieval knights theme of the legion.

I also managed to paint the last of the cultists from the Dark vengeance box so now I only have the characters left from that box, so I can start on the Calth box. 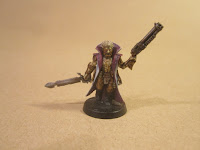 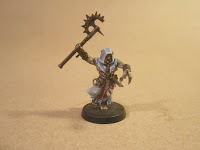 That is all for now, I will probably have a short break on the trio of Knights to gather some momentum to finish the belt feeds, which I by the way managed to bend into a somewhat better shape, allowing the torso the motion I needed for the pose. I will get back on this as soon as I have finished of the last details on these.
Upplagd av Agis kl. 12:21 Inga kommentarer: 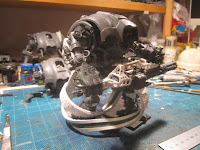 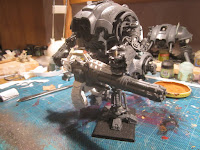 Since last time I have not really made that much progress with the Warmonger and it belt-feed Gatling. Mostly it has been about trying to make the belts fit on to the model. It turned out that it was not so easy running the belts from the back mounted ammo boxes to the gun as I thought, so I had to heat them and try to get them into position. Once I got them to go from the boxes to the gun I mounted the top body to the legs. I am not really happy with how the belt run and how they interfere with the legs, so I might need to heat them again and see if it is possible to get some more clearance so that I can turn the upper body a bit. Once I get the pose that I want it is time to add the inside plates to the belts and finish up the connectors at the gun and ammo boxes. 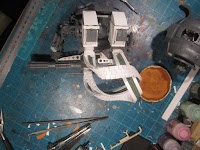 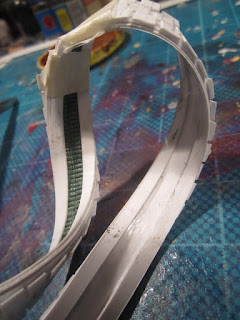 Since the last post I have tried to bulk out the belt-feeds abit. I did this by adding three layers of 0.5 mm thick by 4 mm wide strips of plasticard to the inner edges of the guide totalling a 1.5 mm thickness. This left a trench in the middle of the belt with the same depth as the diameter of the shells fired by the gun. I filled the trench with green stuff and sculpted some cartridges into it. After that I added another strip of plasticard to give the impression of the cartridges being inside the belt. I will at some 5 mm x 5 mm plates to the strips, matching he outer segmented stuff. But first I need to finish the second belt in the same style. I am not looking forward to the plates as there will twice as many of these as there where segments and they all need to have rounded edges.

To make sure the belts work together I attached the back ends to an old brush and the front ends to each other imitating the belts going from the ammo boxes to either side of the gun. Hopefully they will clear the legs of the knight and not put to much strain on the gun and the ammo boxes. 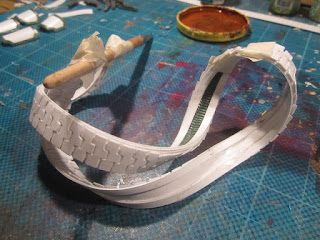