Sydonian Knight away from home 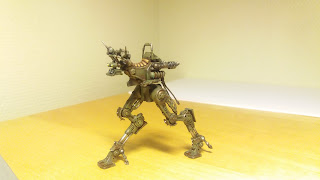 So, I have not been completely idle but I have not done as much as I would have liked. So far I have painted the legs and seat of the sydoninan knight. It is a really nice model to paint and I think it is turning out quite ok. Now I will start with the rider and see how that goes. 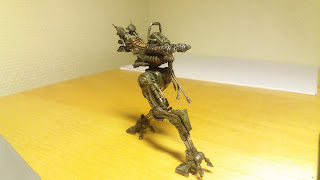 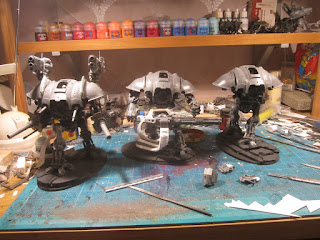 I finally managed to get some time in with the knights. So I finished of the bases and assembled the legs. Now I can mount the torso on the legs and get a better feel for the pose of the Knights. So far it is looking ok. I would have wished the knight with the belt feed gun would have the gun in a more forward direction instead of across the chest, but I have realised that the anatomy of the knight does not allow for that. I might have been able to point it slightly more forward but the belts prevent it and I am not about to remake these. Over all I think they are looking distinct, which is nice since they are all from the same mono pose kits. Now I just need to finish of the arms for the close combat variant. Initially I thought I would go for a dual wielding swords man, but now I am more into a sword power fist/shield combo as it will make it stand out from the warlord with its symmetric armament. Of course I can not just mount a standard fist on it so I am looking into the possibility to have two assault cannons mounted on the back of the hand (inspired by the warlord power fist).
Well it is really nice to have them on their feet. There is still much to do, but now I can at least see where I am going.
Upplagd av Agis kl. 15:03 1 kommentar: 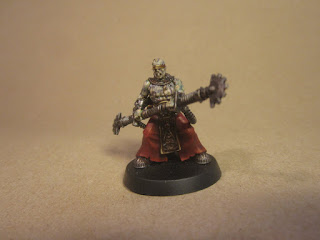 I still have not got much time for hobby stuff, but last time I was, away with work I managed to finish the last Sicarian and now I just managed to paint a Mechanicus Electro Priest. Not much to say really. Love the elector priest models, very simple builds but still lots of detail if you which to commit. The pictures turned out a bit dark so I will probably repost some of it later on. Now I will go back to house building and then hopefully get some time to work on the knights. 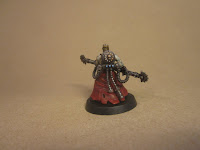 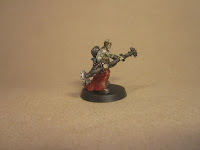 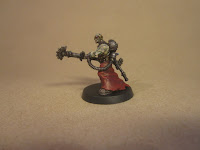 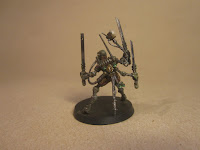 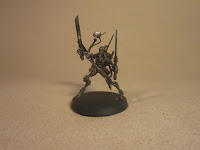 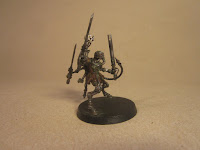 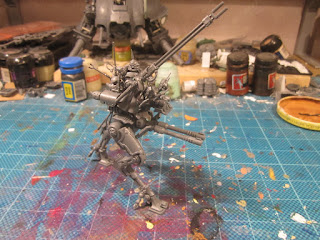 For my birthday this year I got some Mechanicum/Skitarii models from my wife. One of the kits was the Sydonian Dragoon / Iron Strider Ballistarii. I have been a bit reserved about the design of the model but has also been convinced that it would be possible to overcome my inhibitions with some minor remodelling. My main concern about the model is the "Gimp" strapped to the model bellow the rider. I get that the mechanicum is a bit steam punk and all, but come on, it is a strider with a rider, it does not need a Gimp. So I resolutely cut the Gimp away and replaced it with the twin-linked auto cannons. In this way the model actually make some sense (there is a tap separating the top part from the leg assembly, potentially allowing top the to to traverse when it is not joined to the bottom by the Gimp assembly). By doing this I also combined the Iron Strider and the Sydonian as the model both have some heavy weapons and a rider that can carry a lance (or other small arms). All in all a very simple conversion that at-least to my taste makes it better. Now it just needs some paint. 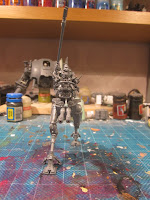 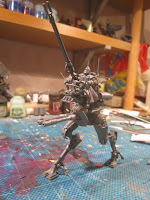