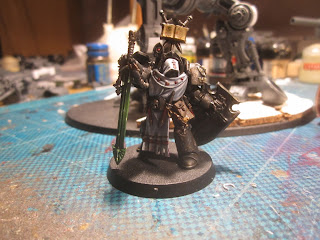 I am just home and repacking for yet another trip so I have not done much really. I finished a pre heresy Knight and worked a little on the WLK, getting the legs assembled and posed in a new position, adapted the fingers of the power fists so that the can grip the handles of the weapons and finally got the weapon in some sort of order. Not much but it is something 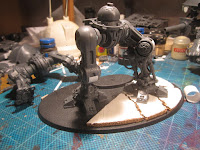 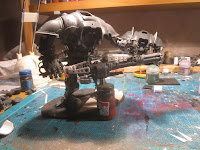 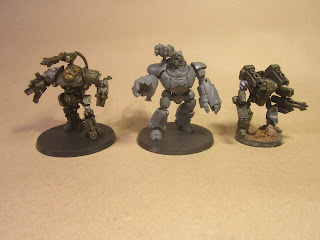 Well, life is hectic, so no time for hobby. At least not in any big chunks, so the knights have been on hold while I have finished of some models that has been hanging around almost finished. Then I also could not resist buying some Kastelan robots. The later is for my home away from home studio as I finished the last of the skitarii last time I was there. 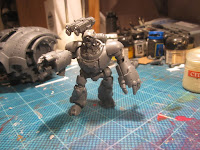 After building one of the robots I must say I am a huge fan of the Kastelan models, (except the head design) as the kit is very versatile in posing etc. This is how they should have done the knight legs. Just cut away the pegs and you can do almost anything. I also had to fiddle around with the arms a bit. I think they looked a bit stumpy with just the guns, and hands are always cool... so I mashed them together. I also switched the head for some left over bits from a defiler, looks much better than the original in my opinion. The original head got turned into shoulder armour. I also had the beef up the back mounted gun by making it twin linked. I also added the fuel tanks to the back instead of the side to make it less awkward.

So this is it for a while now as there will not be much progress the coming weeks. 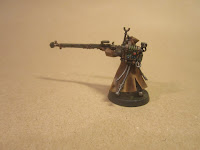 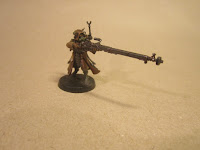 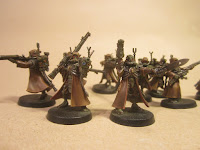 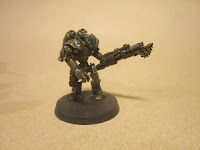 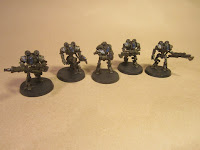 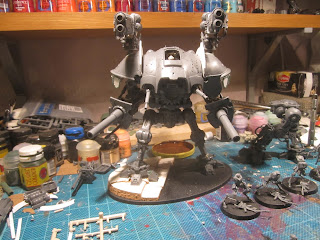 Just a short update on the Knight progress. Since last time I have been working on bases, I know that I am not big on these as I want the model to be the centre of focus. But to make the stands of the Knights work I need them to interact with the ground and hence I need to make the bases first. As mentioned in a previous post I am playing around with cork and sand for the bases and I will carry this through to these Knights also. Well, as I was going to make some base work I also thought I would finish the bases for the Titans as well. As I was in a bit of a hurry when I glued the bases plates to the feet of the titans I did not really think to much about what the bases should look like. I think I was just going to add the sand. But I really liked the effect of the cork on the Knight base so I decided to do something with this also for the Titans. But as they were already glued to the bases I had to work around the feet rather than having them stand on the cork. In the end I ended up doing some road surface which cracks beneath the tread of the titans. I know that the way the broken pieces lie around the holes are not the way the would end up in reality but it was the best I could to with what I had and I needed to cover the holes between the feet and the road. I think it looks passable at least. So most of my time has gone into making and building bases this week but in the end I also managed to get the legs for the War Lord Knight built. 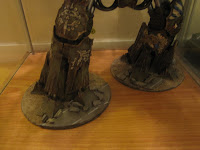 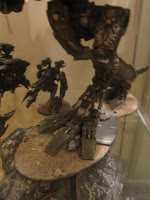 Also, I took some photos of the titans out side in natural light, to see if I could get the real colour across. 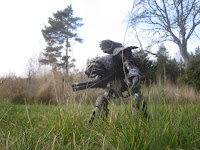 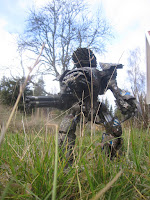 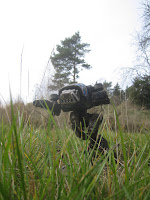 O, and by the way, I got request to show the Gatling mounted gas canisters I decided not to use... 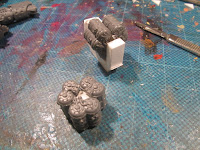