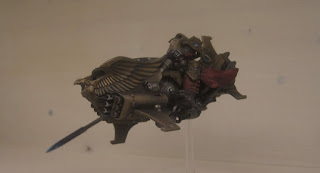 This year I got some Vertus Praetors for my birthday from my wife. These are really lovely models with the right amount of details. The design is also really cool and it gave me the urge to start a small Custodes force. So far I have only painted one, but I have a second in the pipeline. These together with the five man squad form the burning of Prospero and one or two more boxes should make it nice collection. I went for a mix of steel and gold in the same way as I did on my other Custodes. I think it gives them more depth when it is not just one solid metal color. The robes are painted purple as it contrasts nicely with the gold. The scheme is really simple as it is mostly dry-brushing which should make it quick, but I am not sure that they are as quick to paint as I initially thought. All the different layers take a lot of time. Sadly the photos are a bit dark. 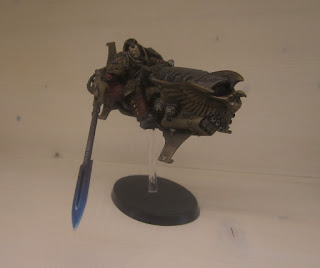 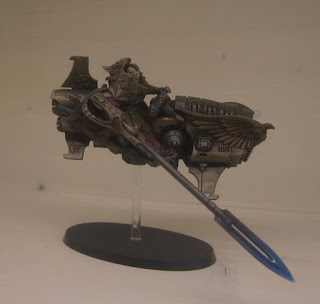 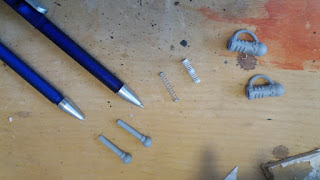 One of the large uncertainties of my Warlord build has been how to do the arms so that they can be posed and removed for transport. I could not do it the same way as I did for the Reaver, with a screw going from the top into the arm as the Warlord has the shoulder mounted weapons siting on top of the arm socket. One other thing that differs is that the Warlord has two pitons going from the main body to the arm. For the Reaver I skipped some of the cables between the arms and the body to make the arms removable but these pistons are also such an visible part of the arm assembly for the Warlord so I did not want to lose them. So for the mounting and positioning I used some heavy duty magnets that should hold the arm in the socket. That did however leave the pistons. This has been bothering me for some time, how to do it, and it has been one of the reasons I have stalled with this part of the build. One idea that I had was to manufacture some "claws", like on the Defiler kit, that would hold the ball in the sockets for the pistons and hence allow me to have one part attached to the body and one to the arm. I tried this and it sort of works, but the claws really limits the motion and they are quite fragile. Another idea that I have been playing around with in my head is to actually make working pistons by having them spring loaded so that they actually presses against the seats in the arm and body. So I tried this and it works beautifully. I did however makes some initial mistakes. I did not check how deep the recesses in the piston body was compared to the body which lead me to cut down the pistons so that they fit with approximately the angle I wanted. However the range of motion was to short. After measuring the recess in the piston body I realized that I could drill them out, making them deeper which meant more motion to the pistons. Once this was sorted I used the spring from two ball point pens to test it all out. These are just test springs at the moment, once I have the real ones I will cut them to length to maximize the stroke. But already now I can turn the arm quite a lot. The spring force is also enough to hold the hole piston in place with out the claws so I will remove the ones I put on and just just the springs to hold everything in place. 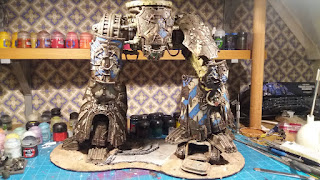 I just finished painting the legs and armor plates for Varangian and I thought I would make a quick post with some pictures. The light is not perfect as it is night here and the model is to large to illuminate in a god way. I will take new pictures later in daylight and with a neutral background. I am quite happy with the result. The GS work and the painting goes together well I think even though both are a bit rough. Now it feels like I am actually getting somewhere with this model.
I still have one panel left to paint for the insides but that will also soon be done. I am also finishing up the modifications to the upper body box which means that I will soon be able to start painting this. I have started assembling the arms and the weapons are soaking in some soap water. Once I have figured out how to attach them I will start the GS work for these. I have some ideas but we will see if I can execute it.

I have gone for the standard Northern Ghosts green as a base for the armor. Over this I have added some blue-white diagonal stripes that are flaking of from the base paint for the left leg while the right leg sports a winged scull in bone and bronze. For the thigh plates I kept the "sword" motif but added a cog wheel and some metal wings. Here I mirrored the stripes on the right side while I kept the lef in the base green. The left side did however look a bit plan with just the green so I added a diagonal white stripe. For the groin plate I decided to go for some more heraldic stuff, similar to what is on the left knee cap, with a checker board and the maniple red edged black diamond with a white spade. As can be seen I also did a GS scull on the knee similar to what is on the Reaver knee. It will tie the two titans together.

I also finished the sanding of the base. I think it really turned out well. I am not a big fan of diorama bases as I generally think that the base should be there to support the model but not distract from it. In this case the chimera sort of disappears beneath the foot of the titan so from a distance it just looks as the titan is stepping on something undefined which works for me. Up close it does however look good and I think I managed to deform it so that it fits to foot really well.

I have also done a lot more battle damage and shipping/streaking than I did on my previous titans. I think I am improving. Also the chaos growth are starting to look better in my opinion. So I have faith the the titan will look ok in the end even though I have been modifying it quite a bit. 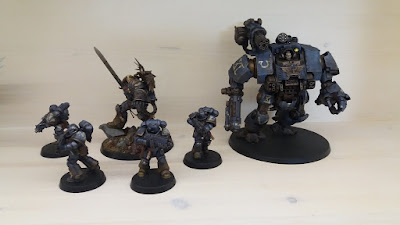 Well....  I am still here, sort of. Last couple of months have been really hard on me and it ended with me on sick leave. Hence not much blogging. But on the other hand the doctors told me to do what makes me relax, that and a lot of exercise. So for the last month or so I have been painting and taking long walks in the forest.

So one of the projects I have finished during this time of contemplation is an Ultra Marine Redemptor Dreadnought. The original model is sort of an eye sore, something is just wrong with it. This of course made it a challenge for me, not that I especially needed one for my collection, but just that challenge, to try to rectify what was wrong, was enough for me to buy one.

So what is wrong with it? All in all it is a really nice model with a lot of posing options and all that which we as collectors and modelers like with a model. But in this case I think it is down to some really subtle design decisions that has taken it over the edge of the chasm of doom.

The first and most obvious error is the beer keg or the pregnancy belly. I do not know what the designers though when they when down this road. For this there is luckily an easy fix, just don't attach the lower hatch and seal the bottom in some other way that doesn't make it to front heavy. There are several versions of this to be found on the internet.

The second is the toddler stance. for some reason the legs are just spaced to far apart, compared to their length, making the stance somewhat awkward. It is not just the distance between the legs that is wrong, also the width of the stance compared to the upper body is wrong. The shoulders of the dread needs to be wider than the hips! And, as i happened to notice by accident, the legs are to uniformly thick in their original assembly, like tubes. My solution to this is to carve of the inner rings for the legs so that I could mount the legs closer together, and to mount the thigh armor the wrong way around (giving the legs some shape).

The third and probably not really a fault is the sarcophagus. I could probably live it as it is, but as most of the 30k dreads has a "helmet" sensor cluster, I think the dread lacks a point of focus that helps keep the eye away from fault one and two. I found some pics on the internet where people had put the upper torso of a marine in place of the to of the sarcophagus giving it a much need focal point.

Once I had sorted one to three I also decided that, as this was probably the only one of these models I would build, I would like to paint both weapon options since I thought that the were excellent sculpts. Sine most of my models end up on display I really do not go for swapable weapons, instead I cram them all on to the model. In this case I believe that it is actually in line with the primaris way of things. So I put the Gatling on a shoulder mount and the plasma thing on the arm.

This was also a great opportunity to try my way of painting metallic colors on a larger model. So far I have only tried it on some primaris marines and Guilliman.

The end result of my endeavors is something I am rather pleased with. I think the modeling changes I made to the original model makes it look better (in my opinion). However, the addition of the Marine to the dread makes it look more like a piloted walker rather than a walking casket (I think this is due to its size compared to a Marine). The paint job is a bit of a stretch for such a large model, and I think, that if I would do this on a tank I would have to come up with something else. As it is there is not enough contrast on the model between the plane areas and the edges. But for smaller models it works fine.

So there you have it. I have been gone for a while but not out of the businesses. I will be back with some more updates on other things that has been done during my hiatus. The Varangian is coming along, and there are some Mechanicum reinforcements as well as custodes and sisters of silence and some Death guard. Well, that will be for another blogg post. 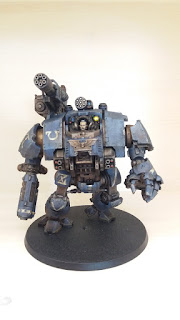 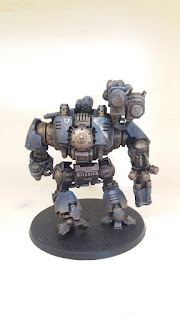 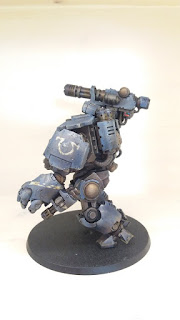 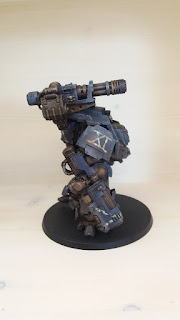