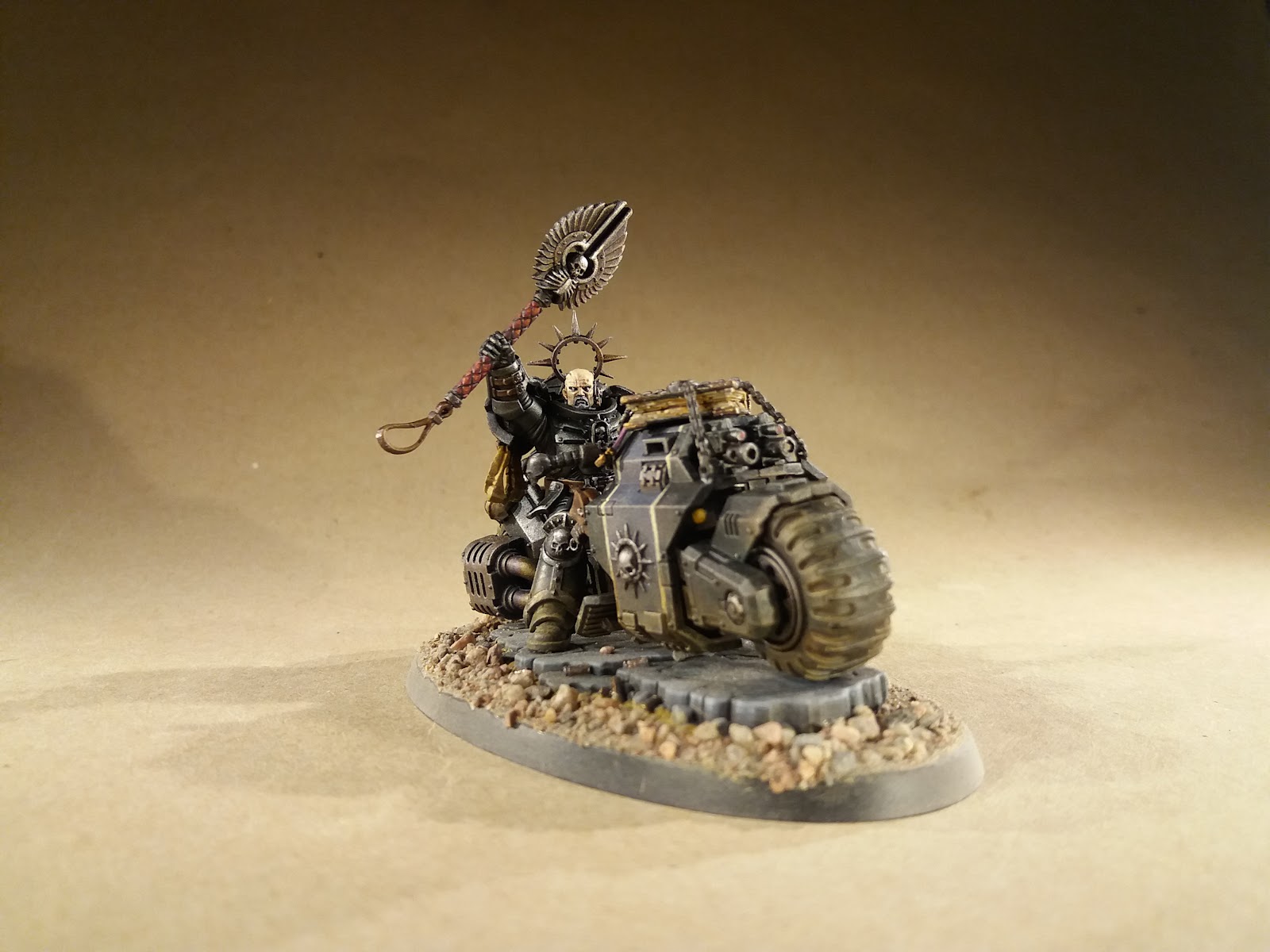 This week, or rather, the ester week, I decided to paint the outrider Chaplain that I picked up as an impulse buy last time I was traveling with work. As it turned out I did not manage to finish it over the holiday so it had to wait for yet another work trip before I could finish it. 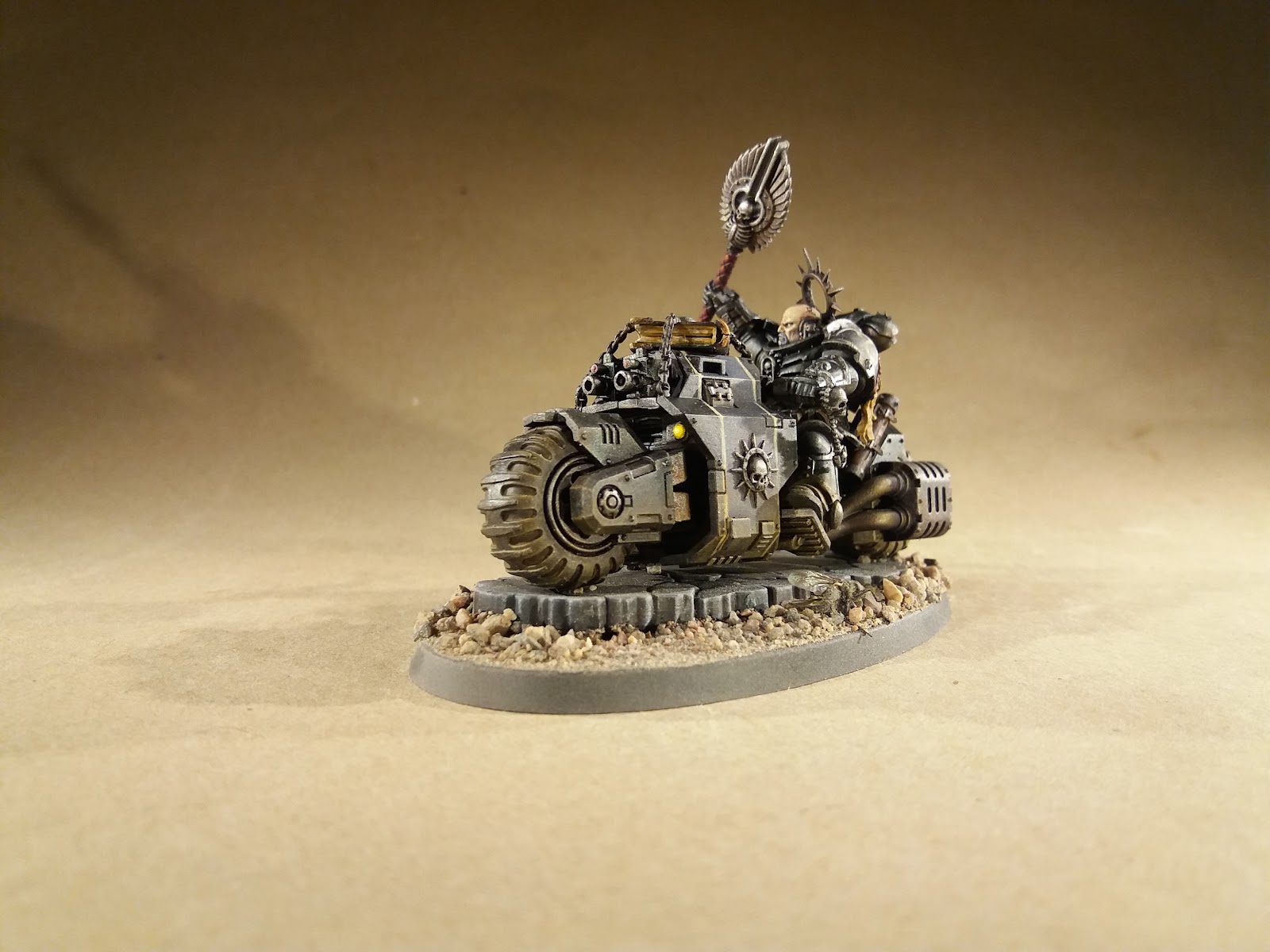 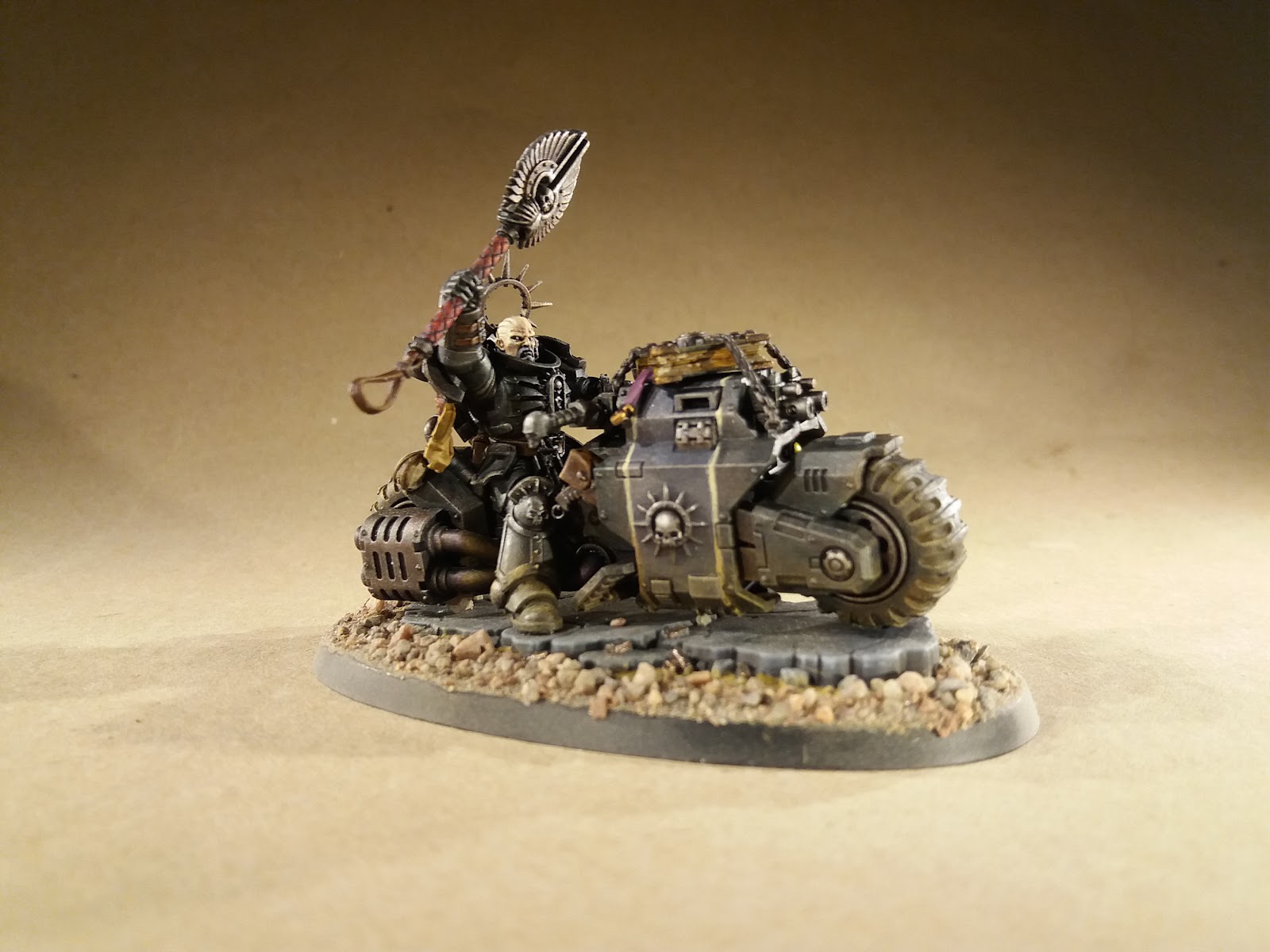 I think the model is fantastic, the pose is great and the model as such is much easier to build and paint than the push fit versions in the starter box. This meant that I could paint it in subassemblies. The only problem I see is that the pelvis of the rider is part of the bike. I would have rather seen that he was a stand alone model that where mounted to the bike so that he could have been painted as a complete model. Now I had to paint each leg separately and the torso by it self. 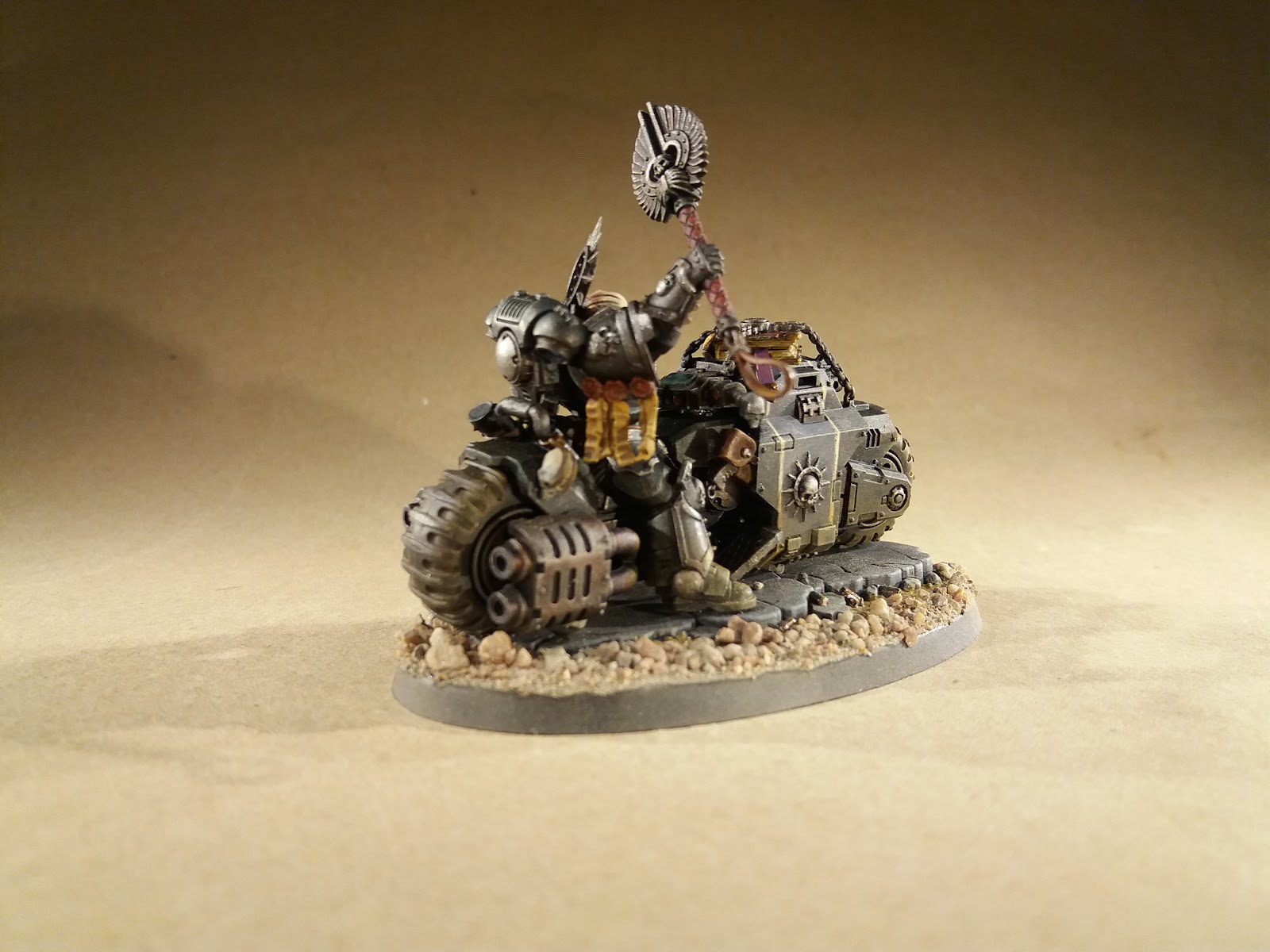 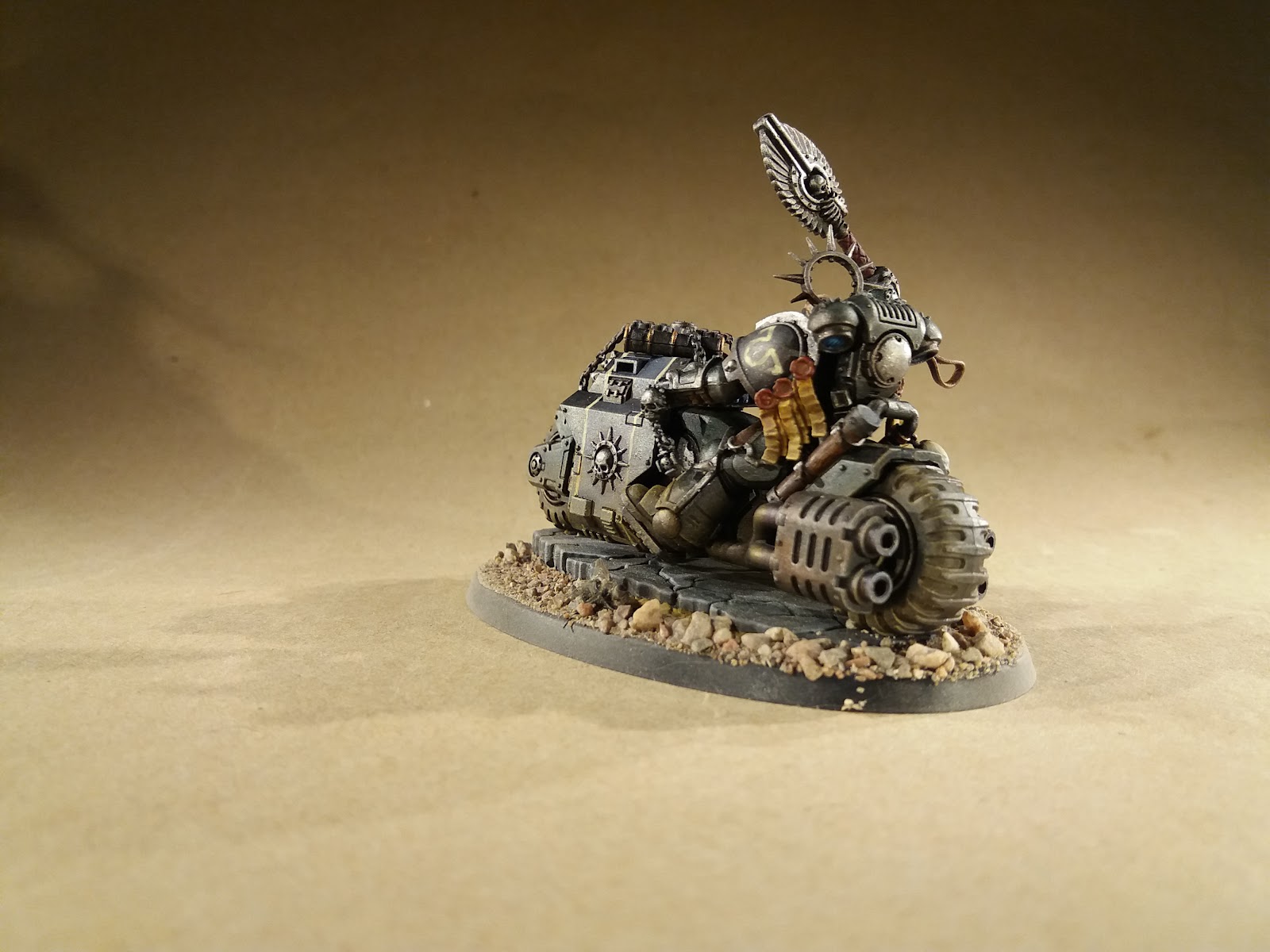 When it comes to the colours I decided to do him in the dark-green-black that I have used on a lot of other "black" models. I also decided to do a blue Ultra Marine stripe on the engine cowling. Once painted it was very difficult to see any contrast between the blue and green (which would indicate that my surfs are almost black). To separate the colours a bit more I painted a thin bone white stripe between them, and then the blue became a bit brighter...  funny how contrast and colour work. Well, the rest of the model got some white metal trim where I tried to do some MNMM techniques, similar to what I have done on my custodes, but I am not really sure that it worked as well. I tried to keep it as monotone as possible to give it a stark look and hence stayed away from the boxart gold. Some dark red did however make it on to the model for a small bit of contrast. Now I only have to two remaining outrider from the box to finish, but first I have some Skiitari that needs my attention.
Upplagd av Agis kl. 12:04 1 kommentar: 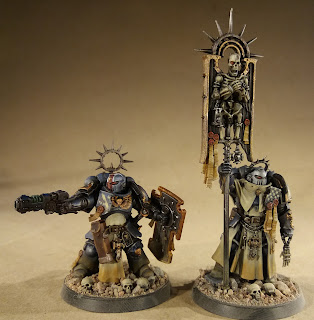 This week I finished up some Ultra Smurfs that got side-lined by BeLakor, the Blade guard Lieutenant and the Ancient. The models are, like the rest of the set, beautiful sculpts that are fun to paint. Colour wise there is nothing new. I was however having some problems deciding on the colour of the Ancients robes. I was tempted to make them in brown leather like I did on the Judiciar but in the end I did them in a bone white to match the honour guard of Marneus Calgar. 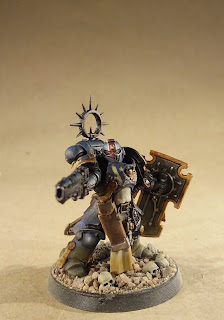 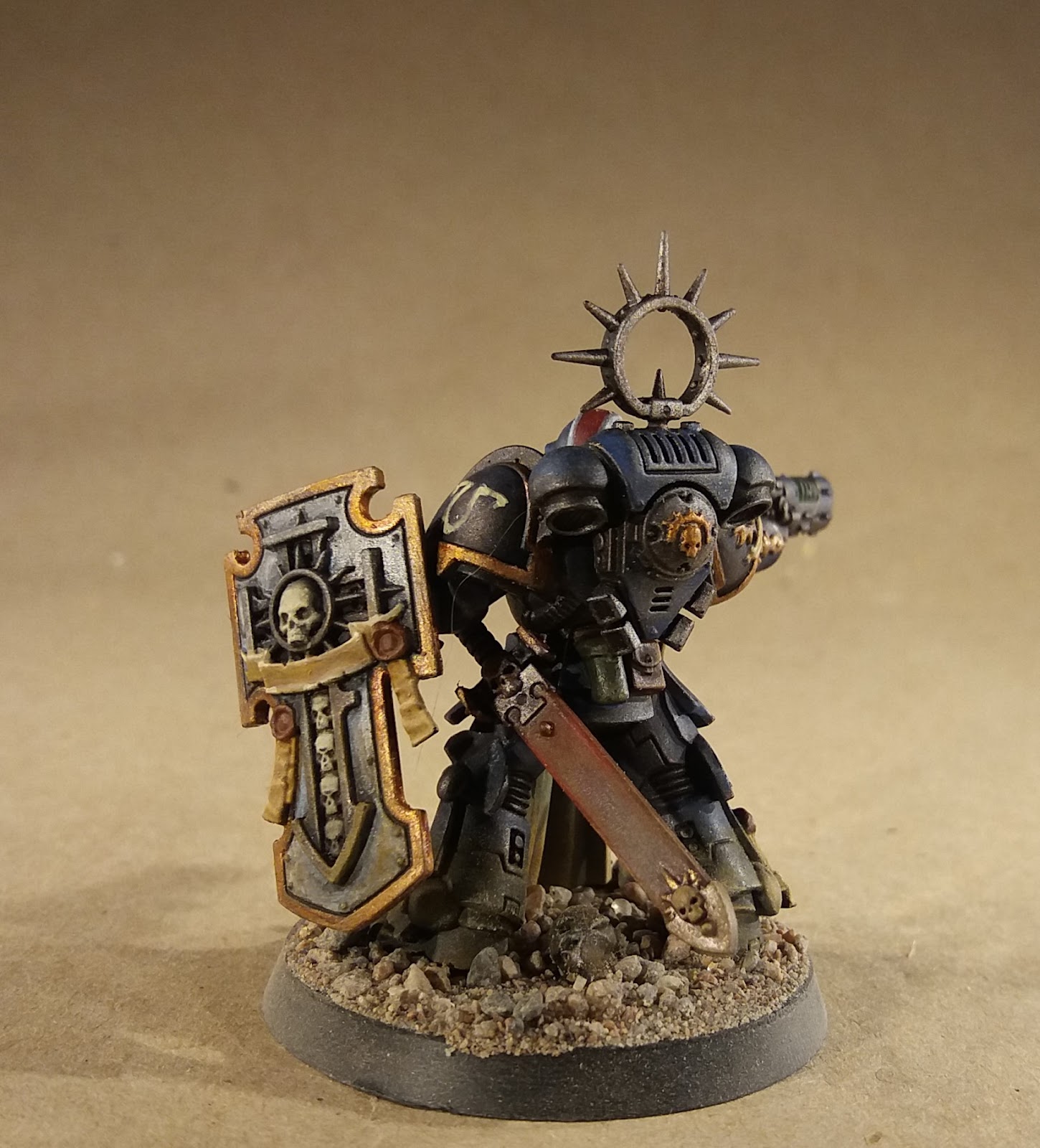 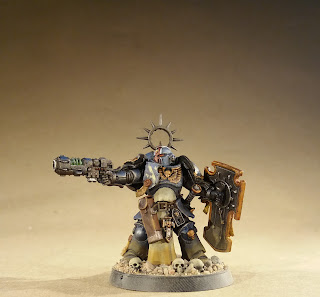 Next up for the smurfs is probably the two remaining outriders so that I can paint the Chaplain on bike that I recently picked up. Either that or I need to finish the squad with plasma weapons. But before that happens I will finish up some skitarri rangers that have been hanging around for some time.

To end todays short presentation I will also present yet anther picture of BeLakor, where the colours are a bit better. For some reason the white balance was very of in the last sets which I believe has to do with the very yellow back scatter of the diodes on my backing paper which tends to make the images yellow. Well now that the natural light is better (earlier in the day and right tilt of the planet) the colours are more representative of what the model actually look like. 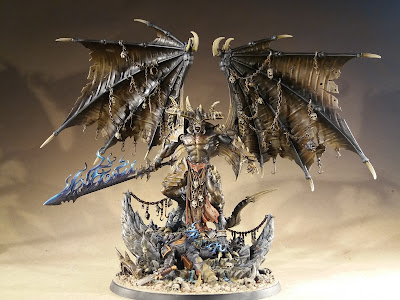