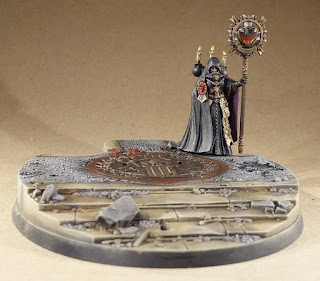 This week I decided to get some painting done apart from working on my titans. So this time it was Saint Lucia that came under the brush. This is a quite "simple" model as it is mostly black robes and more black robes and not to much details. The largest piece standing out form the model it the  hart in the standard. I tried to give it a deep black to read luster and I am pretty happy with the ho wit turned out. 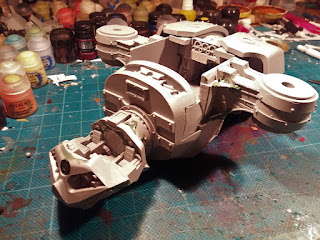 When it comes to my titans I am starting to wounder what is wrong with me. First I bought a Warbringer because it was a new model and I thought that it would be nice to build one. Then I realized that it has no intenals... and as ALL my titans and knights has one I would need to build one...  and considering how long it took me to get Varangians internals done I came up with the idea of buying a Reaver and just give it one of the laser blasters I had leftover from Varangian, it would be a straight forward build with an easy weapon swap... 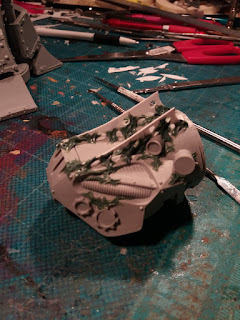 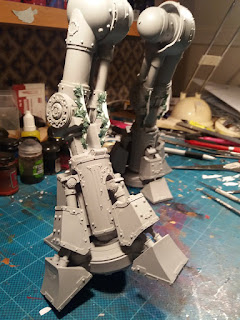 ... but then I got carried away with my ideas for the titan, which include a tone of green stuff work, much more than I would have to do for the internal of the Warbringer... so now I am stuck with a tone of work to do before I can start painting... so does it mean I should buy another titan just to get some painting done?
Upplagd av Agis kl. 13:02 3 kommentarer: 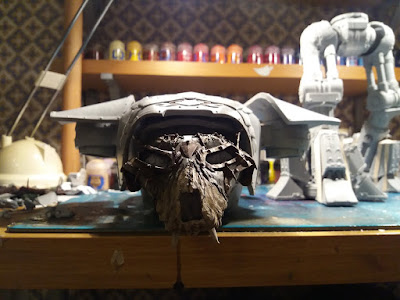 I have slowly been working on the assembly of Fenrir, especially the legs and feet which are a true horror story. It turns out that what I want and what the model is capable of is not necessarily the same. My initial idea was to have a more human like stride, with one for more or less in front of the other...  well... that is not possible. An even making a "stride" seams to be beyond the models articulation... it is more of a small shuffling step. I know that I was complaining about the warlords actual walking capability and the Reaver is no better, at least the warlord was easy to pose...  the amount of pistons in the Reaved foot and lower led is ridiculous, and it all has to go in at the same time. 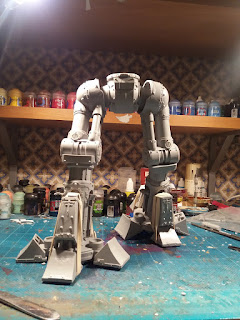 So to minimize my problems I decided to just glue in the front and back leg pistons in a fist posing. the central leg is left unattached and the pistons are just glued into the foot section so that I can pull it out and attach the side pistons later. It is the front and back pistons that determine the angel of the legs in forward directions so they are most important. As I wanted a walking pose I raised the back foot onto the front toe which also meant I have to build that leg first as it would be in the most extreme positions as to the piston positions, then I adjusted the other leg to mach the height at the hip. All in all I am not to displeased with the result even if it was not what I was hoping for... 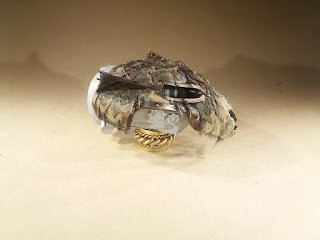 I have also finished the cowl of the head and painted it. It really turned out great so I will go ahead with the theme of the titan..  just need to do a lot of other stuff like it all over which will take time. It also meant that I needed to trim the back carapace quite a bit to fit the ears...  but in the end I do not think it is visible. 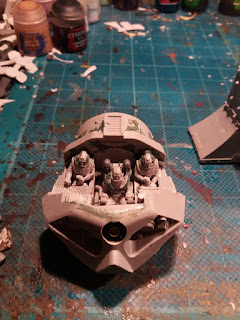 Then there is the crew that also need to have the chaos treatment....  so much GS work to do...  but it is fun even if it takes a lost of time. 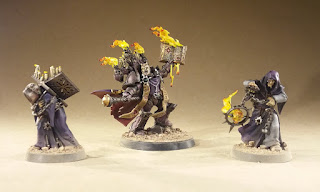 It's been that time of year once again were I add yet another year to the tally, and this year I got a Dark Apostle and his Disciples from my wife. As tradition dictates I went straight to work. The model is once again of such quality and richness of detail that it takes forever to paint with a high risk of having to revisit areas as you notice even more details that you forgot to paint. It is also necessary to paint it in sub assemblies to be able to get to all the details. I greatly enjoy painting these as it really gives you some bang for the buck, but I do not envy those trying to make a full army of these new highly detailed models (or it might just be that I am getting old and do not have the energy of the young). All in all I think it is great to be a collector of models rather than a gamer and I think I could fully occupy my self with just painting character models. 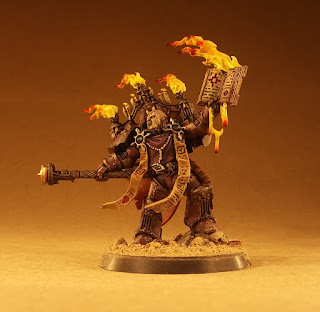 As for colors I went with the same metallic crimson that I used on last years raptors. I really like the effect. The robes were done in a matching back to purple shade. I tried to avoid going to overboard with the shade here but they still got some distinctive highlights. As usual I would like to point out that the effects on the new models are not to my liking as I simply can not get them to match the rest of the model and removing them is to much work. 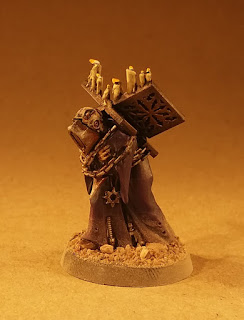 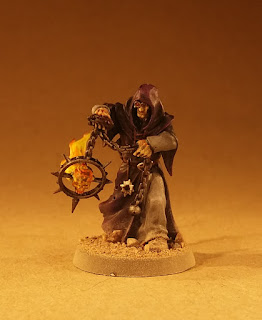 All in all I am really happy with how it turned out, and it has a special place in my collection (and heart) as it was a gift from the wife. Hope the rest of you also like it.
Upplagd av Agis kl. 13:57 2 kommentarer: