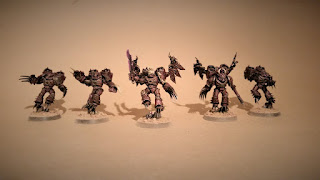 Finished the last two Warp talons that I got from my wife for my birthday. I thought that the small winglets that were supposed to go onto each jump pack looked a bit tiny so I deiced that the aspiring champion and his right hand man would get some decorative wings made from the winglets instead. All in all I thing the kit was fun to build and paint, but I am not sure how much flexibility there is to make another five of them. Might to that just to beef out the unit.

Since I am very happy with this color I have decided to paint the chaos marines from shadowspear in the same colors. And since I can not have a large force with out a name I am calling them Crimson Angels. I do not know if there already are some force with this name but it was the best I could come up with. 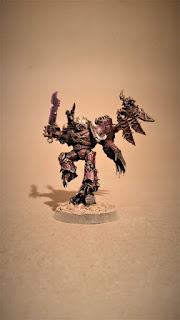 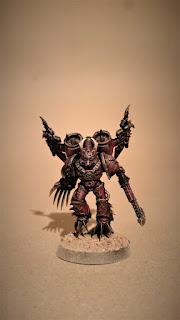 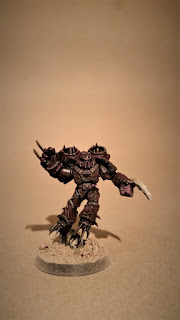 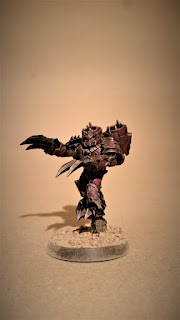 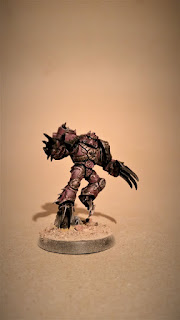 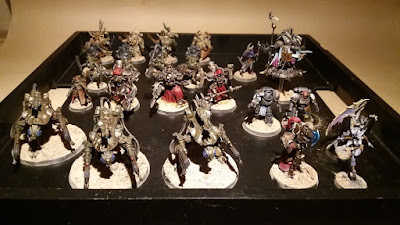 Once in a while I gather up all the models I have painted for the last month or year and head out into the garage for some basing. As those who have followed this blog for some time know, I am not a great fan of bases. Usually I just ad some PVA to the bases and tip them in a bowl of gravel and that is it. The base should not take over the model. On the other hand I have started to work more with the bases lately, at least for the larger models. I they are done right, they can add to the model. My greatest objection to the scenic base is if the model is used for gaming as it detracts from the experience if the hero glides around the battle field on top of an vanquished enemy. But since I have realized that I most likely will not play with these models I can perhaps bend my rules a little. Well that will have to be for some other time, as these got the normal tread mend with PVA and sand.

Here follows some examples of what I have done.

A couple of weeks ago I bought some Harpies from RagingHeroes. I was not sure about the paint scheme but I carried on with what I had at the time. Adding some leather wrist wrappings and some bone edges to the wings really toned down the very blue skin and completed the model. Now I am quite happy with them. My wife thinks that they are a bit over sexualized but I think they fit in with Slaanesh and the old Deamonettes. 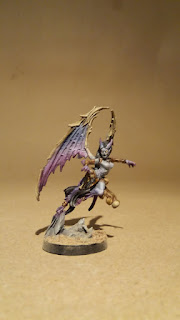 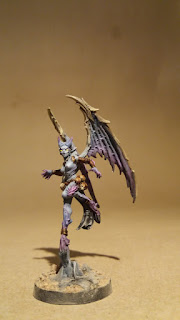 I also finished the last of my Vorax robots so the family is now complete. I really like these models. They are a pain to assemble but they do look so cool once painted. 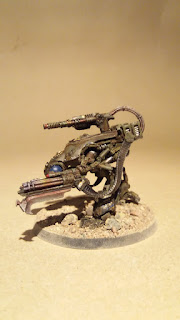 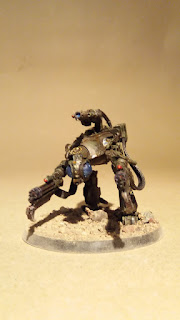 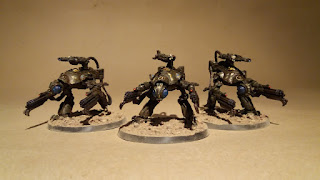 Next up is a Custodian Warden that I got from my wife for Christmas. There are still four more to go and then I also have Trajann Valoris, which I am looking forward to paint. 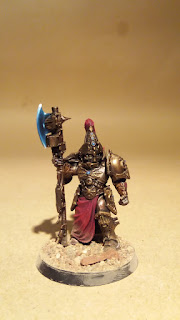 Last of the new models is a Pre-heresy Dark Angel terminator. Not much to say about it. It is the same precipice that I have for all my black dark angels. I which I had more time and skill at batch painting as there is a tone of Dark Angels just waiting for paint in my storage. 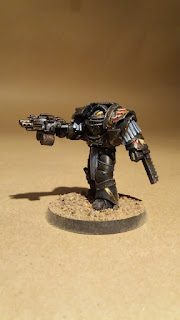 Then we have some models that have already been featured on this blog but I show them anyway with their new bases.

First we have a Tzeentch sorcerer on a flying disc. Here the multi colored metallics can clearly be seen. This is an effect I am very happy with. Still have two more sorcerers in the box. I will save them as a treat for a rainy day. 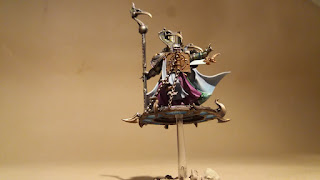 And lastly my Ultra marine sergeant. I do love that this blue is almost black. Next to my Pre-Heresy dark angels in natural light there is almost no difference. But one you put some moderate light on him he shines up in a clear steel blue. Much nicer than the smurf blue and much easier to paint. 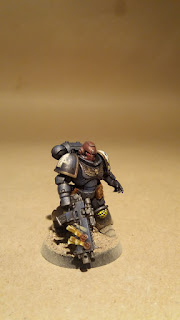 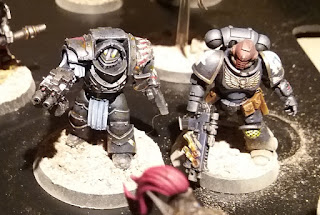 Well that is it. I actually based quite a lot more models that I had just put in the cabinets as I finished the model. I am also working on the last panels with GS on Varangian so I will come back with a separate post on that. Not much left now, I can see the light in the end of the tunnel.

Its been that day again... 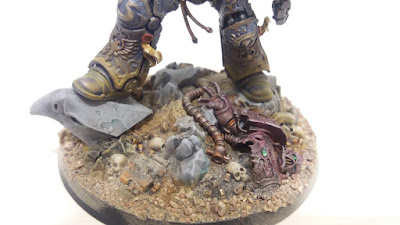 It has once again occurred, it has been that day when I have become one year older. And as per my tradition I give my self a day of from work to celebrate my self. This year I got a box of raptors from my Wife. The models are quite good looking and I have thought of getting a box of them before but I have not really felt that I had a place for them in my collections. They really look very chaosy and most my my stuff is a bit more toned down. So I was at a bit of a loss about how to paint them, but then it hit me. Some time ago when I was painting my Guilliman model I painted a pinkish chaos marine for the base, and I remember that I at them time thought that it would be cool with an army of them. As I had the day off and I had planed to spend it in the hobby room it became apparent that I needed to test the that paint scheme on the raptors. Once I started building the models i realized that the claws looked much cooler than the sword and bolter option, so I think they are more warp talons than raptors now. Well, any way, it does not matter much as I am not really playing games any more.

The painting technique used for these models are pretty much the same as I use for my ultra marines. I start out with a black base, drybrush some bronze and silver tones onto the model. Then I used a heavily watered down screamer pink to paint the armor plates. I added some metal rust tones the filigree and edges. Then it was time for another pass with the drybrush going from bronze to mithril. Then it was just to add some eye lenses and exhausts to the back pack. 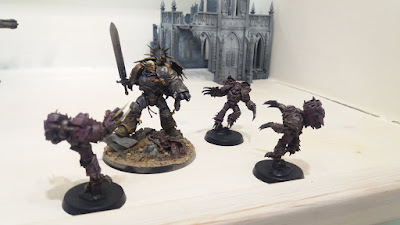 I think they turned out ok. This way of painting really gives the models a very special lighting effect were the highlights move with the light source in a very realistic way. I will try to make a series of pictures as the model is turned and the camera is fixed, or perhaps I can make a short movie showing this effect. But that will have to wait. Now I still have two more models left to go. Then I am really tempted to go for the shadow spear box and make the chaos marines all pink.