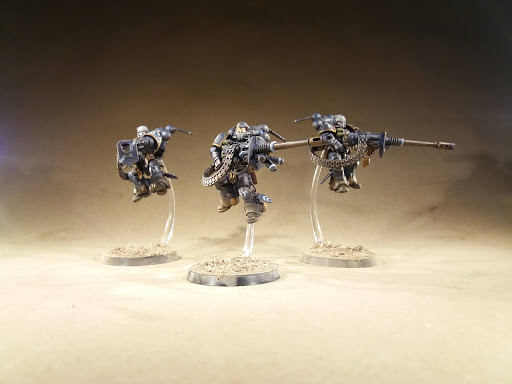 The day of days is here...  the legacy interface is gone and I am forced to use the new blogger to make a post. So I apologize in advance if this will look strange. I still have not figured out how to do a lot of the things as easily as I did in the old version and some things are just impossible to do. But then again they might have solved some of the major bugs. 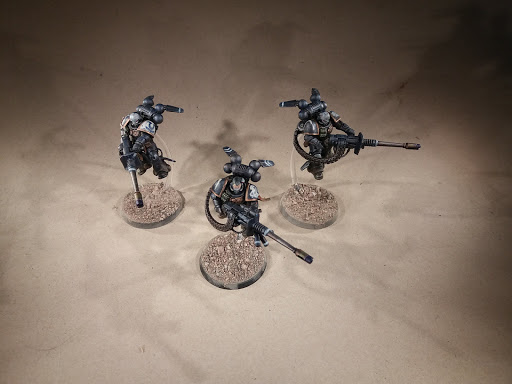 But enough about that. This blog post is about my latest additions to my ultra smurfs, this time in the shape of some suppressors from the Shadowspear box. Sadly they are not individual sculpts which is a shame as there are only three of them. Apart from that I do like them if you cut away the death traps under their feet. Not sure what they are supposed to do? If landing needs these to cushion them a normal marine would also need them if jumping of a wall etc...  and I really can't imagine them moving around with them still under their feet. So off they went. I am also a bit confused about how they are supposed to fly. All other marine jump troops have these beefy engines on their back, but these just appear to have some extra heat exhausts on the back pack and the graves. I suppose that it is some sort of anti-gravity thing to be stealthy. But if one disregard some of more obscure functionality of the model I really like them. The guns look good and the belt-feed looks nice. I was not sure about the small wings in the beginning but I do like them, some how they make the tropes more flyie. 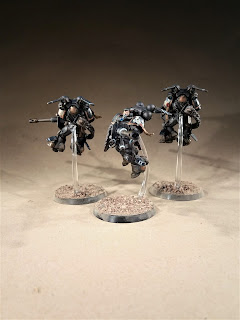 Color-wise they are painted in my usual take on the smurfs with a dark blue (kantor blue ontop of a white metal base) steel color. Trim is golden and the right shoulder is cream white with a blue ultima. I also added some line trimming and other insignia on the armor using a more light blue color  to give them some contrast but still staying in the blue. The tips of the guns got some heat staining just to keep with the belt-feed. I also dusted up the lower part of the legs a bit to indicate that they actually do trudge around a bit now and then just like the rest of the boys in blue.
The only tricky part with the build was to get the backpacks attached to the flying stands. The point of contact is small and the clear plastic does not melt as well as the normal grey stuff so the bond is weaker (I use polystyreene cement).
All in all am starting to get attached to these blue men. I have not been a great fan of the baby blue standard color but these guys do look like mean.
P.S: Placing the images are a pain in the A with this new interface, the pictures are jumping around all over the place, covering text and escaping their area of containment so that you have to chase them all over the post. It was bad before too, but not this bad. The drag and drop of images is at least back again so I guess it is always something. 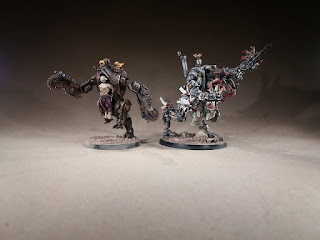 We continue with the additions to my slowly growing collection of Adepta Sororitas. This time it is the Penitent Engine form the Sisters of Battle box. I have never really been a fan of the model, not even the old metallic one as it think it is to front heavy. I also sort of have problem with the lore. I can understand repentia, falgellants etc as these are individuals who are in-principle executed on the battle field. But putting a convict into a battle engine with the purpose of getting them killed is a bit strange. I would guess that you would want the larger damage dealers to survive? But be that as it may. Accepting the concept of strapping some to a close combat machine and sending them into the fray to get killed as a punishment I can not still get around the new VR version of the model. What is the purpose of strapping them to the engine, sending them onto the battle field, with out the ability to influence their own fate, and let them watch something else horrible on TV instead of what is going on around them? If you just wanted to scare them with a horror flick you could just do it at home, in the cellar, and then just cut their throats as the credentials roll... 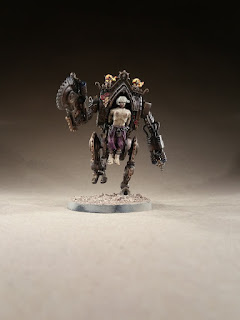 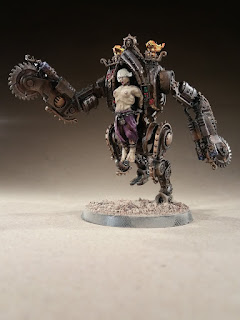 So, I do not like the new pilots and how they are mounted to the model. The original positions makes the model even more front heavy. So I decided to repose the pilot so that I could mount it further into the casket opening. I bent the arms a bit by just bending the plastic. Then I cut the shoulders back a bit so that I could mount the arms along the sides instead of our in the crucifix form. I swapped the head for one of the seraphim heads without a helmet and sculpted some green stuff across the chest to make the pilot more female. 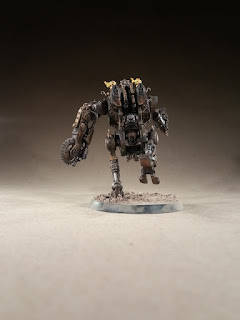 I decided to paint it as a rusted metal with out paint or other adornments to represent the engine itself being ancient, recovered after each execution, to receive a new occupant. The sister/pilot got the same purple robes that I use on the rest of the army. I tired to get the flames at the top of the model to look good but I can not do these "effects" so that they fit with the rest of my style. But aside from that I am happy with the model. I will most likely not make another one though. 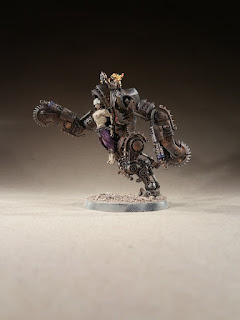 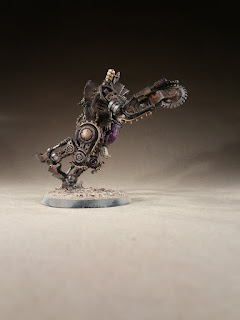 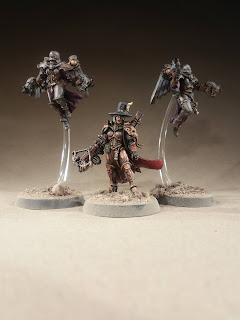 This last week I have been working on Inquisitor Grefax and two Seraphim Sisters. I absolutely love the these models. Very rich in detail and appropriately scaled. Color scheme is as per usual... white metal and purple robes for the sisters and silver and gold for the inquisitor. Really not much to say that has not already been said so I let the images speak for themselves. 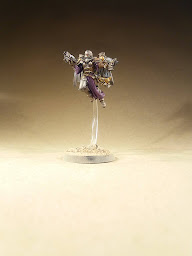 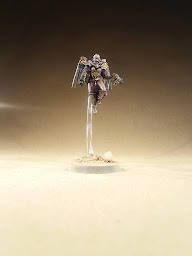 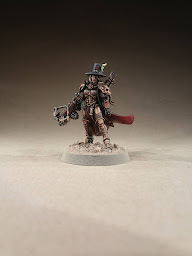 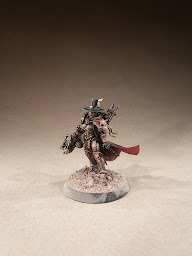 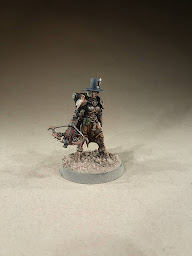 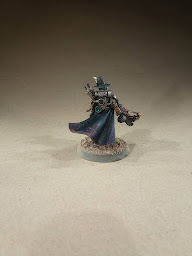 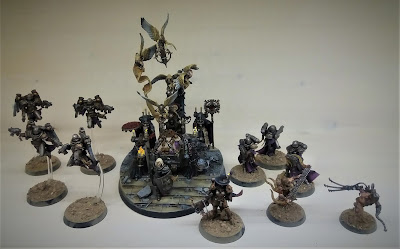