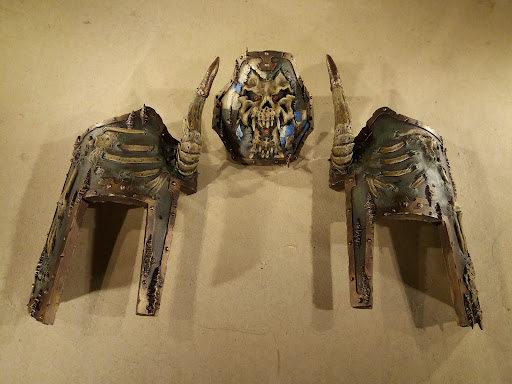 This week I finished the green stuff sculpting on the left leg armour for Fenrir. This is the leg that has the demon face breaking through on the knee pad. This is a recurring theme on my titans. In this case I sculpted an actual face that had broken through the armour rather than having something beneath the skin as portrayed on the FW chaos Reaver and what I tried to emulate on my war lord. I think this turned out fine. This part was done some time ago and I might have already blogged it. 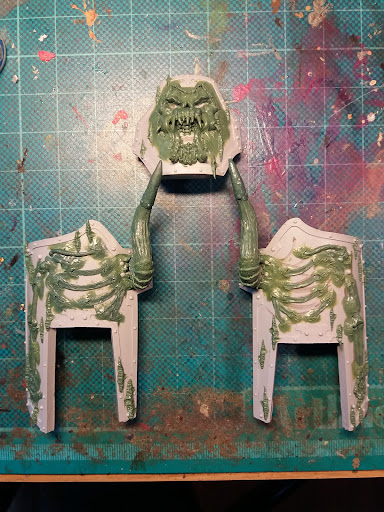 What I had not figure out was what to do with the lower leg armour and how to tie this to the face. I was playing around with some ides of having spikes/horned ridges breaking trough the armour in some nice pattern but I could not settle on a nice design. Then I came up with the idea of having two great horns poking through just beneath the knee cap, similar to the horns on the Magnus model. So I set about sculpting these, and to cut back on the need for excessive amounts of GS I made the core from three layers of 2 mm plasticard that was shaped into a rough horn shape. This was then covered with GS in several layers adding more and more details. 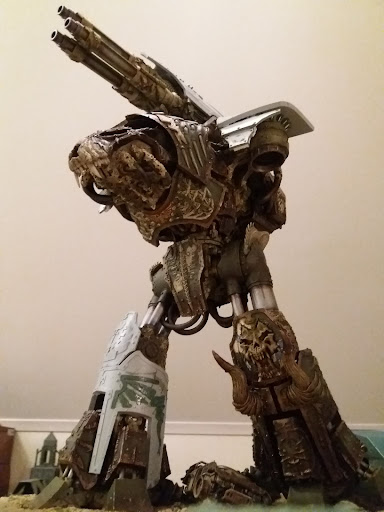 Once I hade these done the thought struck me, what if I continue on the Magnus theme and let the horns come come from a chest and then the face could be the demon face on the knee. Then I just needed to add the rest of the rib case to the side armour together with some arms to fill up the space. I did this in the same way as the rib case on the chest panel, where the ribs are poking through the armour in places. To get the anatomy reasonably correct I actually use some reference images. All in all I am pleased with the result. I probably could have med the details a bit better and the transitions to the armour smoother but over all I am pleased. 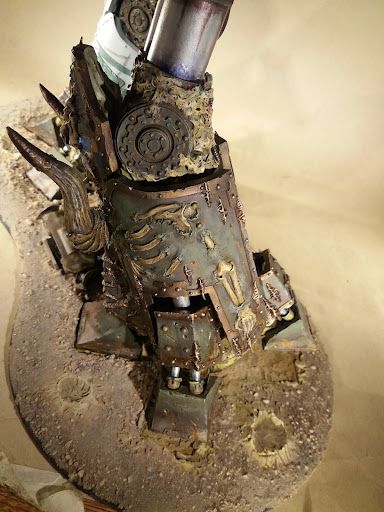 Painting was pretty standard. I kept the base colours of the armour to the greens without adding any decorations so that it would not be to busy, except for the knee that always has the heraldic designs on them. Now I am working on the laser blasters for the arms. After that there is not much left, just need to finish the GS designs for the right leg, fix the shoulder amour and the weapon cowlings.
Upplagd av Agis kl. 13:42