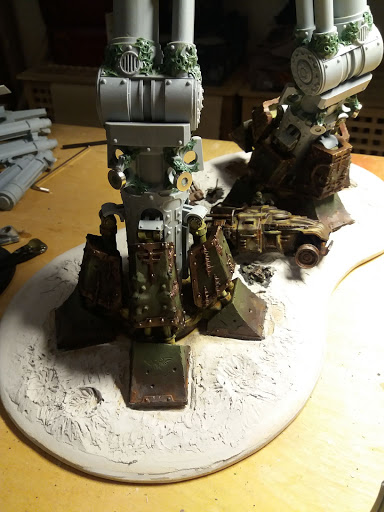 These last days I have been working away on Fenrir with the hope of getting the leg assembly completed soon. Still have some small things to do but I am almost there. 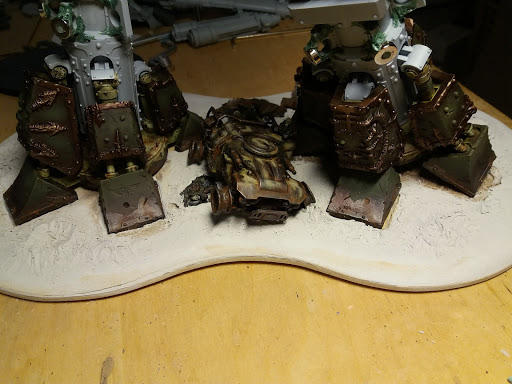 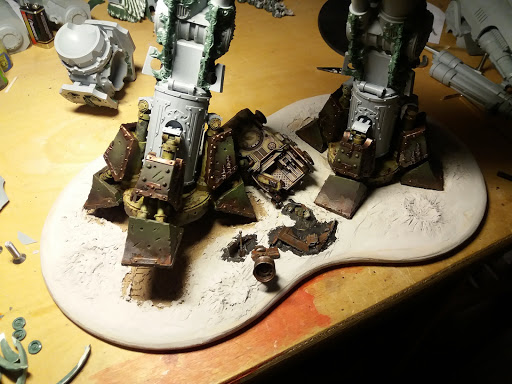 As mentioned in my previous post the Ridge Runner has hit a mine and gotten the left rear while blown off. The explosion , which is close to the turret killed the commander in the turret and threw the rear gunner clear of the wreckage. The driver only survived long enough to crawl out of the right hand side access door before collapsing. The bodies and the Ridge Runner has been sitting in the desert since then, rusting away. At least that is the back story of the base, before Fenrir came walking along. 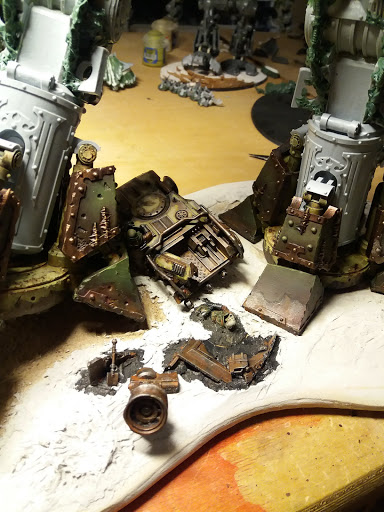 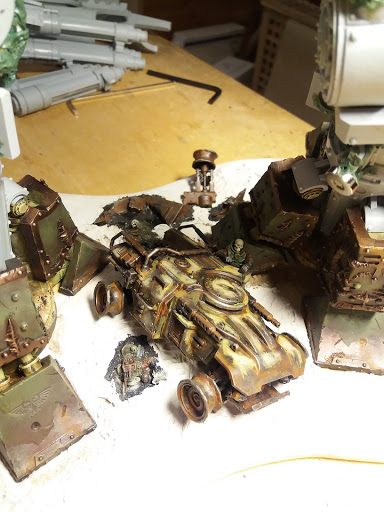 For Varangians base I modeled the crushed Chimera underneath the titans foot. I thought about having the Ridge runner crushed under the foot here also but I thought it would be to much of a copy so instead it will only be debris on the base.

To model the base according to the backstory I came up with I opted to split the gunner that comes with the kit in to a gunner and driver that have half buried in the sand, one face down and one face up. I used some skulls from the skull kit to show that it was some time since this happened. I did the Ridge Runner and the debris separately from the base for ease of painting. Each piece was attached to a small plasticard base that is then glued to the base and covered with plaster.

Once I had made all the parts I needed to position it on the base. Initially I had thought to keep the wheels on the model but it turned out that they were a bit large and they did not really go well with the backstory of the Ridge runner sitting there for so long. So instead I decided to model some rims instead, where the rubber had be burned of or something similar. I used blue stuff to make molds of the rims of the wheels from the kit and then made GS casts. I am really happy with how it turned out.

The Ridge runner and the debris was painted in my usual rusted metal. Then I added on some splotchy paint remains on the Runner just to indicate that is one was painted and not just metal.

Once I had all the parts painted i attached them to the base and added some plaster around them to give some structure to the ground. I also sculpted some craters to show that is a battle field (new or old?).

The base in it self is made up of two layers of Masonite were I had made cut outs for the feet in the top layer to indicate that the Titan sinks into the ground a bit due to its weight. For the raised foot I created an imprint by covering a thin layer of plaster with gravel and then pressing the flat foot into this, leaving an imprint of the bottom of the foot. It was not a perfect print but it is ok and will only be visible if you look closely as the raised foot cover most of it. The base is attached to the titan by screws so that I can remove it if I want (a lesson I learned with my original titans who are glued to their bases and hence updating the bases to my current standard will be hard.) 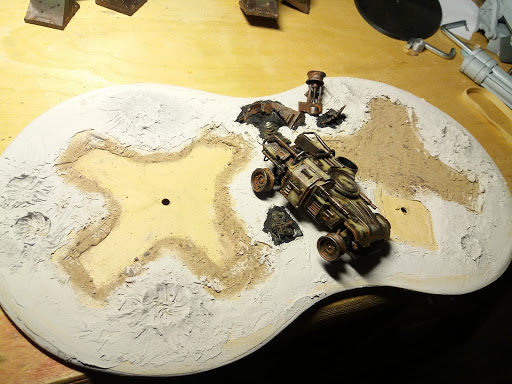 Once the plaster is dry I will go over the painted parts and make sure that the paint job is still ok before adding gravel to the top surface. The craters will have to be painted in a sand color to match the gravel later on (similar to what I did for the base of my knight, Entropy).

I have also been painting the feet of the titan and will soon be done with the GS work on the legs and pelvis so that I can get them painted and assembled. Then I will for the first time be able to mount the torso to the titan and see what it will look like in the end. It is quite a strange feeling to start the painting process on some parts before others are even finished or that the model has ever been assembled completely.