Once again I have spent more time at work than home for the last week which means limited progress. But I have managed to sneak in some hours here and there while passing by home. Sadly my inspiration is a bit all over the place and I have a hard time settling down for the next project after Varangian. 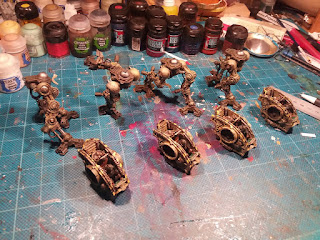 One long-running project that has been going in the background for some time is my banner of Armigers. Eventually this banner will host six Hellverins, six Warglaives and a Preceptor. So far I have built and painted the legs and bodies of the Hellverins. Two are even done. I have also done the armor of the Preceptor but have not build the body yet. This is a large and time consuming project. 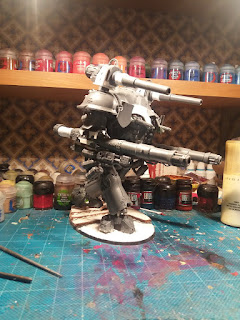 Another long-running project is my Dominus knight for the Hird, a banner of knights supporting the Jarl of the Norther Knights. This is a somewhat converted Dominus knight sporting dual volcano cannons and dual rapid fire battle cannons. This build has been sitting on my desk for some time waiting for a spurt of inspiration to finish of the last components of the conversions so that I can finish it up and get it to paint. This of course includes a cockpit sporting a dual crew. This project could be a reasonably contained project to finish, if the inspiration is there. 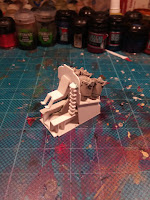 Then I have stated work on the Jarl himself, the Barron of the Northern Knights. Here I have gone for some have GS work to decorate the armor, and adding some extra trim in the form of leather straps from the shoulders and winged shields at the knee and elbow joints. This is also a well contained project. A bit time consuming with all the layers needed for the GS so probably not a prime contender at the moment bur something that will run in the background. 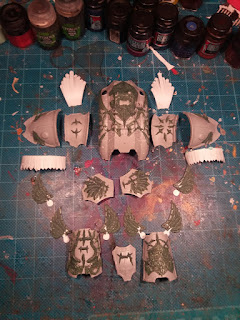 Then we have Fenrir, Reaver titan nr 2561. This was a buy I did this summer in anticipation of Brexit making it harder and more expensive to buy things directly from Forgeworld. So far I have only started on the head, which will have more of a K9 look. I am not really sure exactly how this will turn out but I am thinking about having bone and ribs etc breaking through the armor, making it look a bit like a zombie werewolf. This is a somewhat large project as it will include a lot of GS sculpting but at least no major conversions. 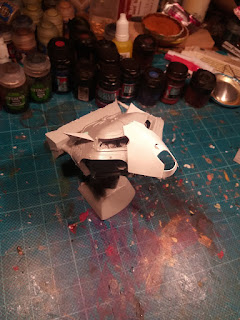 So at the moment I have a bit of the hobby butterfly syndrome. I just hope that I will find the motivation to settle down for one project so that I can finish it.